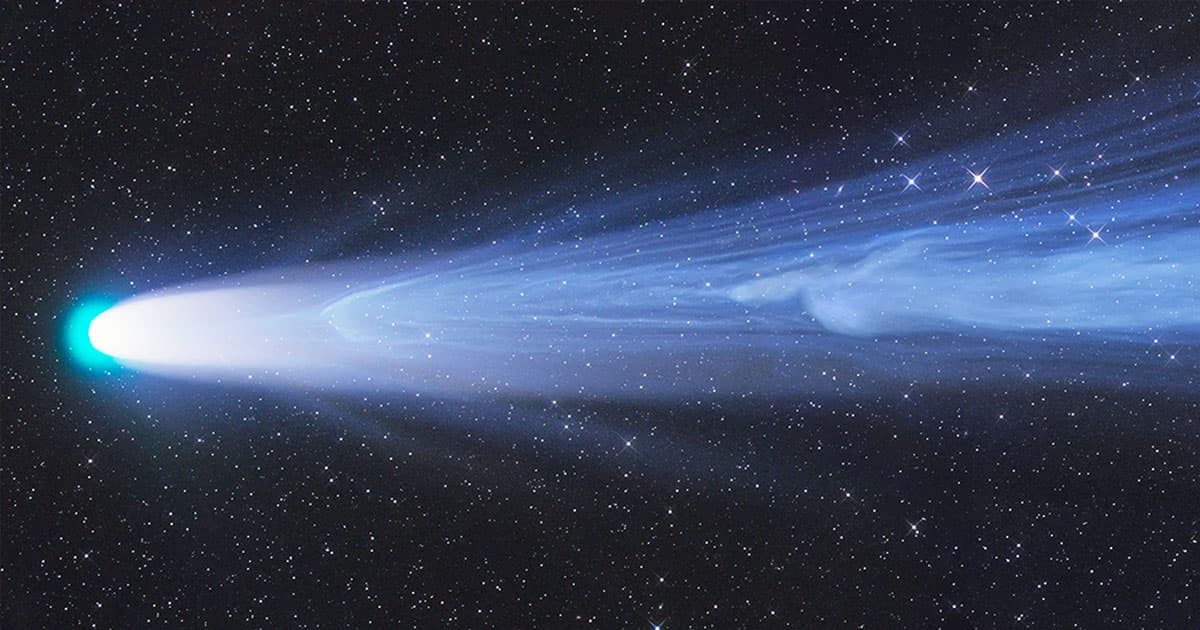 This shot is unreal.

This shot is unreal.

Austrian astrophotographer Gerald Rhemann has really outdone himself with an absolutely stunning picture of a dying comet, including its dazzling tail, in front of an endless stretch of stars — and it's so beautiful, we're having trouble believing it's real.

The photo, which earned Rhemann the top prize at the Royal Observatory Greenwich's Astronomy Photographer of the Year contest this year, shows the comet Leonard, an extremely bright comet that was discovered in January 2021, as it screams through the solar system.

"Astronomy, myth and art come together beautifully in this shot," contest judge Imad Ahmed said in a statement. "It holds great value to scientists, as it elegantly captures a disconnection event."

The comet was named after its discoverer, Gregory Leonard, a senior research specialist at the University of Arizona's Lunar and Planetary Laboratory. It proved to be extremely bright, becoming visible to the unaided eye, including its impressive tail.

Rheman's image, which was taken on Christmas Day last year, shows off comet Leonard's tail, otherwise known as a coma, in all of its glory. Comets become visible as they shed any volatile materials including dust and gases, as they pass through the inner solar system.

The comet met its demise and disintegrated during a close approach of the Sun in January 2022.

But its blaze across the sky gave astrophotographers plenty of opportunities to get a closer look.

Other top entries of the contest include a stunning image of the International Space Station passing in front of the Moon's Sea of Tranquility and a gorgeous photograph of a helix nebula called "Eye of God."

"This award is one of the highlights of my astrophotography work," he said in the statement. "All the effort that went into making this image a success was worth it."

More on the comet: Unfortunate Comet Flies Too Close to the Sun, Disintegrates and Becomes a Ghost

Watch This Breathtaking, Close-Up Clip Of The Surface of A Distant Comet
4. 25. 18
Read More
This Image Is the Final Moment of Humanity's First Visit to a Comet
10. 11. 17
Read More
No, a Huge Asteroid Probably Won't Wipe out Humanity
7. 11. 17
Read More
+Social+Newsletter
TopicsAbout UsContact Us
Copyright ©, Camden Media Inc All Rights Reserved. See our User Agreement, Privacy Policy and Data Use Policy. The material on this site may not be reproduced, distributed, transmitted, cached or otherwise used, except with prior written permission of Futurism. Articles may contain affiliate links which enable us to share in the revenue of any purchases made.
Fonts by Typekit and Monotype.