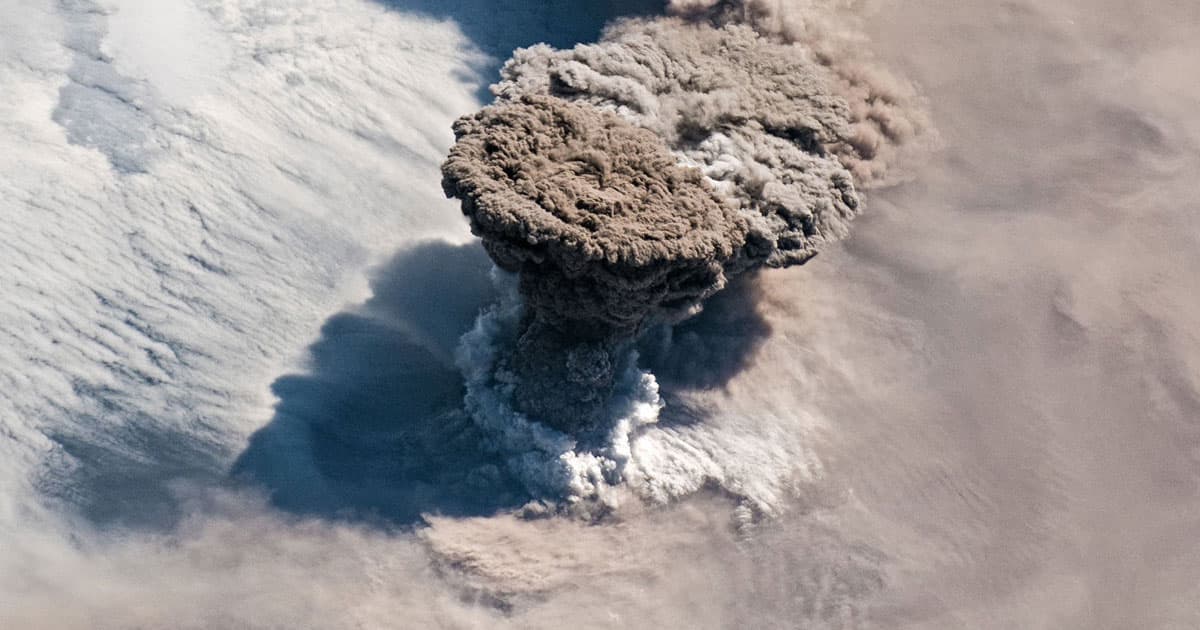 Watching This Volcano Erupt From Space Is Absolutely Epic

Watching a massive volcano erupt is truly jaw dropping — but that's nothing compared to the incredible view astronauts get from the International Space Station.

NASA astronauts were treated to an amazing sight this past summer, according to Syfy Wire, when the Raikoke Volcano on the Kamchatka Peninsula in Eastern Russia erupted into a massive cloud of dark smoke. Ash and volcanic gases created a giant plume above the 2,300 foot diameter crater as the International Space Station cruised by overhead.

The image above shows convection currents causing a vertical plume to rise above the volcano.

There are about 300 volcanoes in the surrounding areas according to NASA, roughly 29 of them active. The reason why there are so many is because the peninsula lies on top of a tectonic ridge where the Pacific plate is being pushed underneath the North American plate.

A second image shows the particles getting washed out across the peninsula by the wind.

Plumes that reach the stratosphere, around the altitude of cruising commercial airliners, stick around much longer than the plumes below, having a much greater effects on both aviation and climate, as NASA points out.

Fire! Fire!
NASA Is Setting a Fire Inside a Spaceship
5. 12. 20
Read More
How Meteorites on Earth Could Help Us Solve the Mysteries of Volcanoes on Mars
10. 8. 17
Read More
Earthquake Swarm Shakes Mount St. Helens
5. 10. 16
Read More
+Social+Newsletter
TopicsAbout UsContact Us
Copyright ©, Camden Media Inc All Rights Reserved. See our User Agreement, Privacy Policy and Data Use Policy. The material on this site may not be reproduced, distributed, transmitted, cached or otherwise used, except with prior written permission of Futurism. Articles may contain affiliate links which enable us to share in the revenue of any purchases made.
Fonts by Typekit and Monotype.