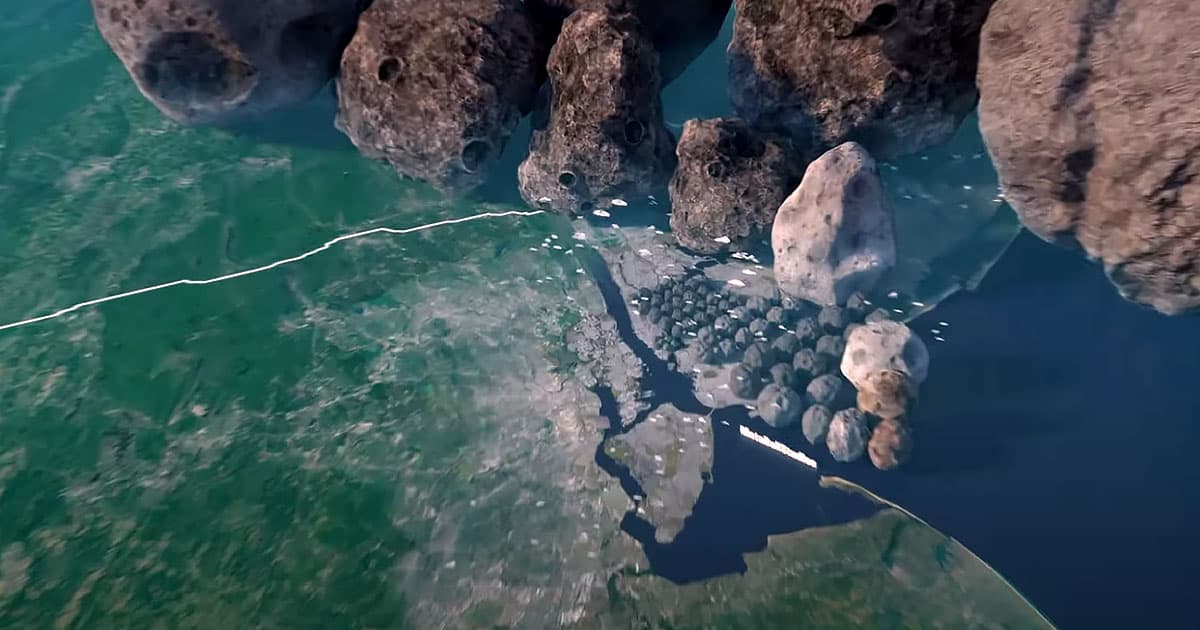 How are there so many of them?

How are there so many of them?

And they all vary considerably in size, as demonstrated in an amazing new video shared by MetaBallStudios on YouTube that compares the sizes of all of the gas giant's moons to New York City.

It provides an incredibly concrete sense of scale for Jupiter's natural satellites, which scientists believe formed from a massive disk of gas and solid debris.

While dozens of the gas giant's moons are pretty tiny — crushing only part of Manhattan, for example — the planet's four Galilean moons are far larger, ranging from a diameter of roughly 2,000 miles in the case of Europa to Ganymede's chonky 3,270 miles.

The origin of these four moons is still shrouded in mystery. Europa in particular has long fascinated scientists, as they believe the tiny satellite is covered in a layer of ice with a massive ocean lurking beneath it. That makes it one of the most tantalizing targets in our search for extraterrestrial life here in the solar system.

While the video only shows animated versions of Jupiter's moons, NASA's James Webb Space Telescope recently got a real-life look, capturing a highly detailed image of the planet alongside Europa.

In 2019, Jupiter's gas giant cousin Saturn overtook Jupiter in becoming the planet with the most moons in the solar system when astronomers found 20 additional moons orbiting it, bringing the total to 82 moons, which is just two more than Jupiter.

Fortunately, we'll get a fresh look at Jupiter's fascinating satellites thanks to NASA's upcoming Europa Clipper mission — and we can't wait to see the results.

More on Jupiter: James Webb Picture of Jupiter So Crisp You Can See Its Moon Europa

Jupiter Jokesters
Nitwits Claim Wrongly to Have Disproved the Existence of Jupiter
Jan 30
Read More
Ganymede Closeup
NASA Spacecraft Takes Gorgeous Pictures of Jupiter’s Largest Moon
6. 8. 21
Read More
Fission Power
Russia Wants to Send a Nuclear-Powered "Space Tug" to Jupiter
5. 26. 21
Read More
+Social+Newsletter
TopicsAbout UsContact Us
Copyright ©, Camden Media Inc All Rights Reserved. See our User Agreement, Privacy Policy and Data Use Policy. The material on this site may not be reproduced, distributed, transmitted, cached or otherwise used, except with prior written permission of Futurism. Articles may contain affiliate links which enable us to share in the revenue of any purchases made.
Fonts by Typekit and Monotype.