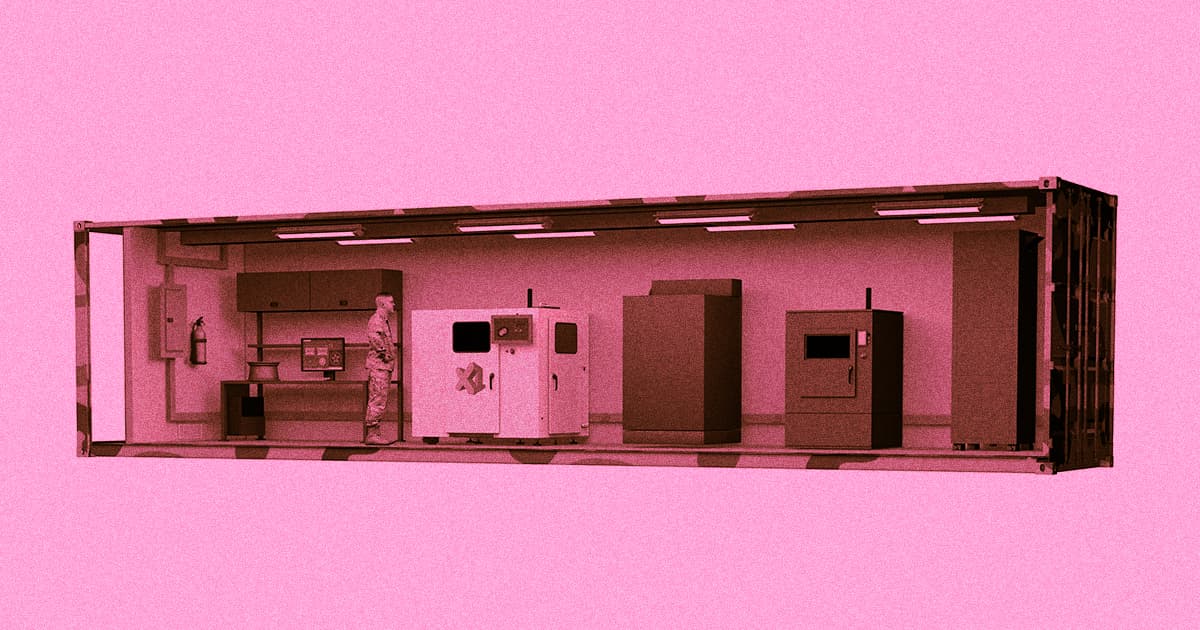 The US Military Is Getting 3D Printing "Factories" Inside Shipping Containers

The 40-foot containers will contain all of the equipment to scan, model, and manufacture parts out of metals, ceramics and more.

The 40-foot containers will contain all of the equipment to scan, model, and manufacture parts out of metals, ceramics and more.

The United States Department of Defense just awarded a contract to additive manufacturing company ExOne to develop 3D printing mini-factories that could be deployed into the field during a military operation.

The factories are essentially complete 3D printing labs that can be housed entirely within a shipping container, according to Interesting Engineering. It's an intriguing — though not unprecedented — idea that the Defense Department says will help improve military logistics and allow for parts and tools to be replaced as needed on the spot.

The 40-foot containers will contain all of the necessary equipment to scan, model, and manufacture parts out of metals, ceramics and other composite materials, according to Interesting Engineering. The idea is to make the process as straightforward as possible so that soldiers or technicians in the field can replace parts and tools with a powder-based 3D printing process called binder jetting — without needing a great deal of technical knowledge.

"Binder jet 3D printing is a critical manufacturing technology for military use because of its speed, flexibility of materials, and ease of use," ExOne CEO John Hartner said in a press release.

The new Defense Department project won't be the first portable military 3D printer, according to Interesting Engineering. Though the Army has been talking about the concept for years, the Marines used a similar but smaller printer in 2018. The Dutch Navy also has a collapsible printer for spare parts.

But the new contract seems to be for a more comprehensive facility than any before it, making it an interesting project to watch as we see how portable printing technology develops in the field.

READ MORE: US Military to Have 3D-Printing Factories in Shipping Containers [Interesting Engineering]