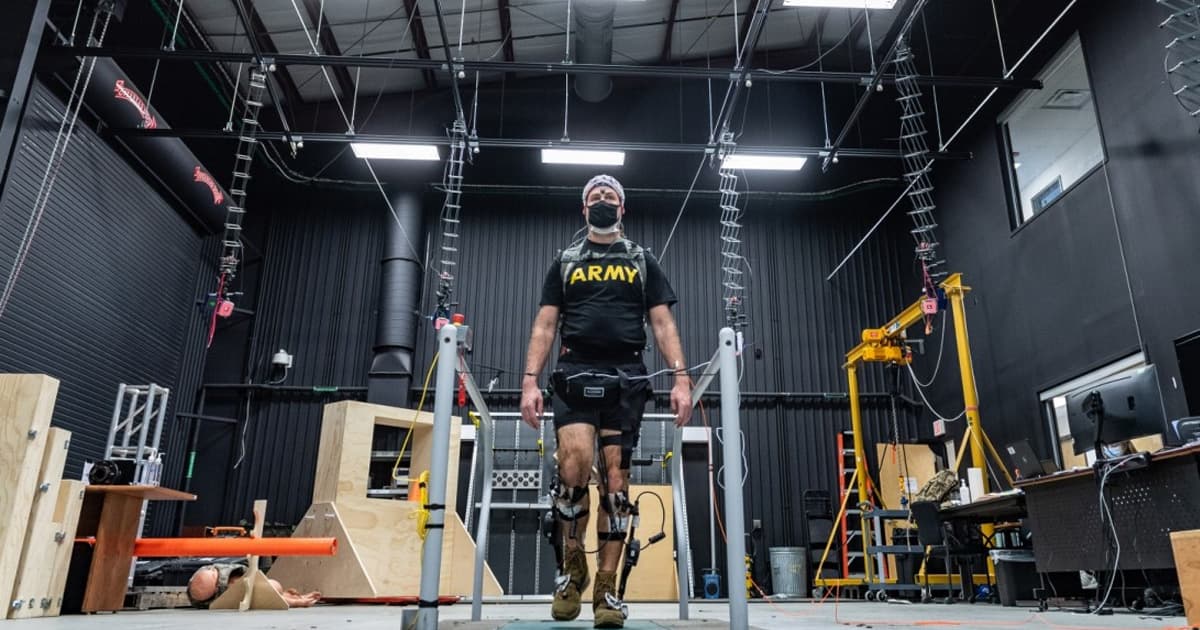 Hermes Would Be Proud

The US Army Is Testing a Powered Exoskeleton

These unique boots could allow soldiers to carry heavily loaded rucksacks without getting tired.

These unique boots could allow soldiers to carry heavily loaded rucksacks without getting tired.

The US Army is testing out a pair of powered exoskeleton boots called the Dephy ExoBoot, which could soon allow soldiers to carry heavily loaded rucksacks with ease over long distances.

The ExoBoot has an internal computer and sensors that glean information about how to assist the unit's wearer using built-in actuators.

A current iteration, the Army says, is capable of detecting its wearer's gait in order to assist accordingly.

By tracking minute movements via 40 reflective dots across trial participants' bodies as well as 128 electrodes via a skull cap, military researchers were able to finetune the exoskeleton boots' performance. Participants were asked to walk on a treadmill for about an hour.

"This will both improve our understanding of how humans adapt to intelligent systems, but also these signals carry information that could be used to help train the agent," said research scientist Cortney Bradford, from the US Army Combat Capabilities Development Command (DEVCOM), in a statement.

It's still unclear if the ExoBoot is able to actually alleviate the stress of carrying heavy loads on foot. Researchers are planning to analyze the data over the upcoming months and present this data over the summer.

"We don’t have much data to compare to it," Bradford said. "Our longer-term objective is to identify the critical biometrics and integrate them into the exoskeleton controls."

More on exoskeletons: Exoskeleton Maker Says Powered Suits Could Soon Be for Sale at Home Depot

It's Big, it's Robotic, and it's Pretty Cool—Check Out This Giant Mechanized Exoskeleton
1. 7. 17
Read More
US Army Says They Will Have Laser Weapons by 2023
3. 7. 16
Read More
The US Army's has a new "smart" grenade launcher that can take out people hiding behind cover
10. 14. 15
Read More
+Social+Newsletter
TopicsAbout UsContact Us
Copyright ©, Camden Media Inc All Rights Reserved. See our User Agreement, Privacy Policy and Data Use Policy. The material on this site may not be reproduced, distributed, transmitted, cached or otherwise used, except with prior written permission of Futurism. Fonts by Typekit and Monotype.