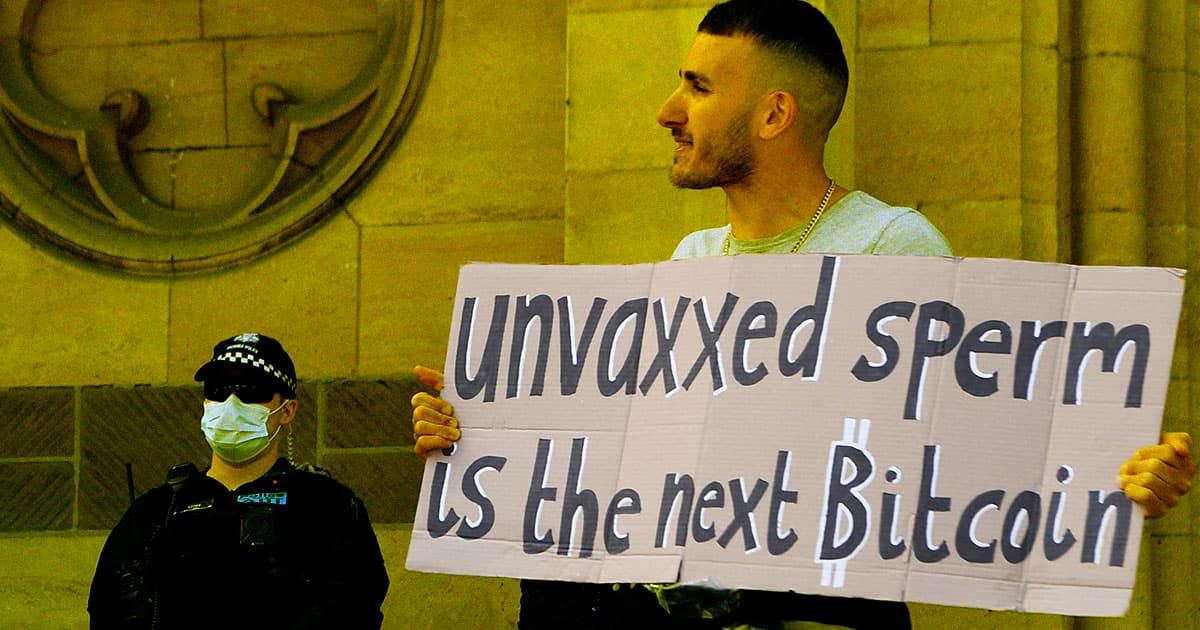 Because we live in a nightmare of our own making, a group of ardent morons have created a new cryptocurrency based on the idea that vaccines lower your sperm count.

The cryptocurrency, dubbed "Unvaxxed Sperm," launched earlier this month, Vice reports. Its developers wrongly claim that most people don’t need the COVID vaccine, and are fierce advocates of quack treatments such as ivermectin. They also told the website that the project is to "ensure the continuity of objective scientific inquiry and the freedom of discourse."

"We’re not anti-vaccine," one of the developers, who only went by the name Jason, told Vice. But later he added, "To a degree, I’d say we are anti-vaccine." Okay then.

A "TRUMP WON" flag and a sign that says "unvaxxed sperm is the next Bitcoin" #Melbourneprotest pic.twitter.com/ylUcJBxthr

Though Unvaxxed Sperm initially saw significant growth when it launched, it seems to have blown its load early and crashed over the weekend.

Still, the developers of the crypto hope that its absolutely stupid name will draw more people into the anti-vax community, according to Vice.

They also have future sperm-themed projects lined up, including a cryogenically frozen sperm project and an anti-vaxx dating app, because we are a cursed species.

It should go without saying that there is absolutely no evidence that the COVID vaccine lowers sperm count. In fact, there’s some evidence that suggests getting COVID could cause impotence. Still, that won’t stop morons from claiming otherwise.

Overall, the crypto is a hideous marriage of so much that is awful about the modern world. After all, using the already tedious cryptocurrency trend to bilk money from other idiots and push dangerous misinformation about the COVID vaccine has to be some sort of grim high water mark for our dystopian hellscape.

More on bad crypto: Hackers Just Stole Nearly $200 Million from a Crypto Exchange, in the Second heist in Two Weeks