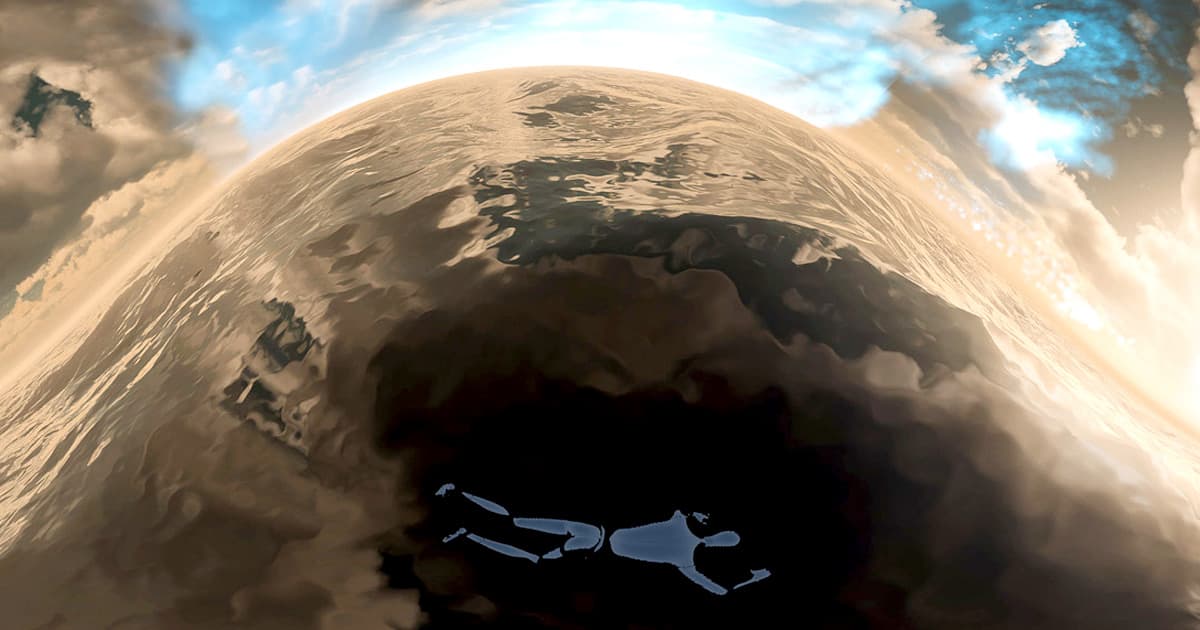 This Underwater VR Tricks You Into Thinking You’re Flying

"It was the closest I've felt to floating in another world."

"It was the closest I've felt to floating in another world."

The “Spaced Out” experience dreamed up by multidisciplinary artist Pierre “Pyaré” Friquet and collaborators allows participants to be virtually transported to the Moon through a combination of abstract imagery and archival footage from the Apollo 11 mission.

By floating underwater, the experience is designed to fool you into thinking you’re drifting through outer space.

“It was the closest I’ve felt to floating in another world,” CNET senior reporter Joan Solsman wrote in her review. “During several portions of my demo, I genuinely forgot I was floating in a pool,” journalist Kyle Melnick wrote for VRScout.

A specially designed “Divr” VR headset by manufacturer Ballast VR features a built-in snorkel allowing the wearer to breathe underwater. Sound is sent out through speakers attached to the headset rather than piping it through headphones.

Ballast VR has already been offering its water-oriented VR services to water parks around the country, including a VR slide experience. A deep dive simulation and jet-assisted underwater ride are in the works as well.

READ MORE: Unlike sex, VR is crazy better when you do it underwater [CNET]

More on VR: Panasonic’s VR Glasses Are Unlike Any You’ve Seen Before

TV for Your Face
Elon Musk Says the Metaverse Sucks and Neuralink Will Be Better
12. 22. 21
Read More
Breakthrough Technologies
Facebook Hardware Devs Reportedly Skeptical of Metaverse
10. 28. 21
Read More
Facebook Huh
Facebook Shows Off Neural “Wristbands” to Control AR Glasses
3. 11. 21
Read More
+Social+Newsletter
TopicsAbout UsContact Us
Copyright ©, Camden Media Inc All Rights Reserved. See our User Agreement, Privacy Policy and Data Use Policy. The material on this site may not be reproduced, distributed, transmitted, cached or otherwise used, except with prior written permission of Futurism. Fonts by Typekit and Monotype.