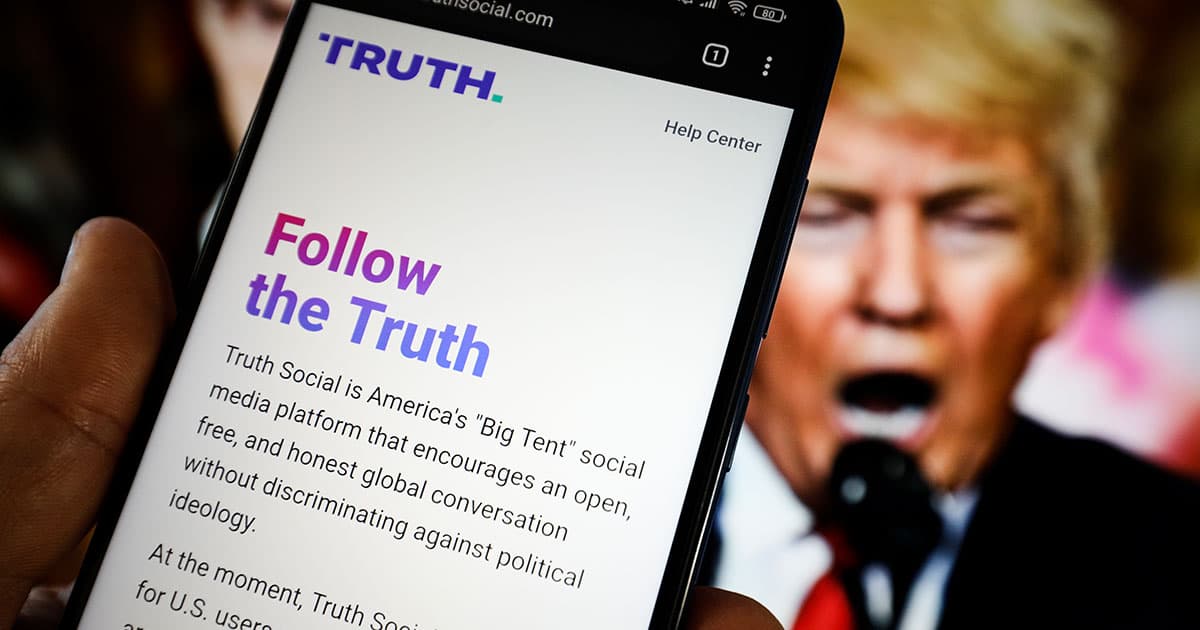 We are Very Surprised

"It sure would be nice if they would approve us."

"It sure would be nice if they would approve us."

Google, apparently, does not play. The tech giant has officially banned former president Donald Trump's floundering social media platform, Truth Social, from the Android app store. But considering that the app was founded in response to the former president's forced departure from Twitter — from which he was booted for his part in the January 6 riot — is anyone really surprised?

"On Aug. 19, we notified Truth Social of several violations of standard policies in their current app submission," Google told Axios, which broke the story, in a statement, "and reiterated that having effective systems for moderating user-generated content is a condition of our terms of service for any app to go live on Google Play."

Not being on Google Play doesn't mean that Truth Social is banned from society completely; Apple users can still download it, at least for now. But it does mean that Android users — who, as Axios reports, make up 44 percent of all smartphone users —  can't join in on the service's self-described "open, free, and honest global conversation." And as the app is apparently having money trouble already, missing out on those green-text downloads can't be good for Truth Social's struggling bottom line.

According to Axios, Google has maintained that the ball is in Truth's court — if it can figure out how to better moderate its content, Google will let them back online. But while the company has apparently been cooperative with Google behind closed doors, its public messaging has been wildly different.

"When are we going to be available on Android? Well, look, that's up to the Google Play store. We're waiting on them to approve us, I don’t know what's taking so long," Trump Media and Technology Group CEO Devin Nunes, who also authored a riveting opus titled "Countdown to Socialism," said on a podcast. "It sure would be nice if they would approve us."

I bet it sure would be, guy. But despite Nunes' comments, TMTG apparently, as the company reportedly said in a press statement, has "no desire to litigate its business matters in the public sphere."

"It is our belief," they added, in a glorious show of patriotism, "that all Americans should have access to Truth Social no matter what devices they use."

"Don't Be Evil"
Google Refuses to Pull Website Responsible for Scores of Suicides
12. 10. 21
Read More
Speak English
Donald Trump Says Bitcoin Is a "Scam"
6. 7. 21
Read More
Oh, Billy
Google Debuts Dystopic 3D Prison-Style Video Chat: Project Starline
5. 19. 21
Read More
+Social+Newsletter
TopicsAbout UsContact Us
Copyright ©, Camden Media Inc All Rights Reserved. See our User Agreement, Privacy Policy and Data Use Policy. The material on this site may not be reproduced, distributed, transmitted, cached or otherwise used, except with prior written permission of Futurism. Articles may contain affiliate links which enable us to share in the revenue of any purchases made.
Fonts by Typekit and Monotype.