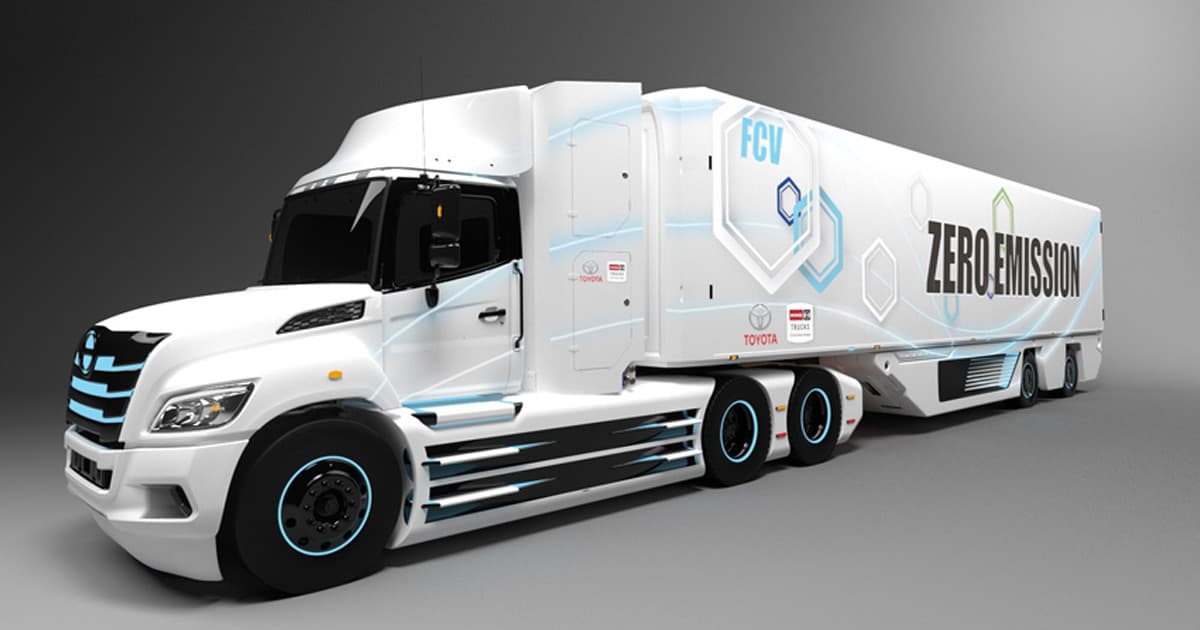 "It will be quiet, smooth and powerful while emitting nothing but water."

"It will be quiet, smooth and powerful while emitting nothing but water."

"It will be quiet, smooth and powerful while emitting nothing but water," Tak Yokoo, Senior Executive Engineer at Toyota, said in a statement.

The Japanese carmaker's North America division will be partnering with Hino USA, a commercial vehicles manufacturer, to produce the "heavy" Class 8 fuel cell truck specifically for the North American market.

The truck itself will be based on the existing Hino XL Series chassis and powered by Toyota's fuel cell technology.

Toyota is planning to show off the first demonstration vehicle in the first half of 2021, but we still know little about it. The prototype of a prior initiative called Project Portal 2.0 may provide some clues: revealed in 2018, the prototype was a 670 horsepower semi with 1,325 pound-feet of torque and a towing capacity of 80,000 pounds. Its fuel cells gave it a reported range of 300 miles, CNET reports.

It's a strange time to announce plans for a hydrogen-powered semi. The news comes after Tesla competitor Nikola Motors landed in hot water last month after an investigation revealed that the company may have misled shareholders with its demonstration of its "fuel cell-powered" Nikola One semi truck back in 2018.

The company's founder later stepped down amidst the scandal with a Ford VP taking over the reigns.

Yiiiikes
Tesla Competitor Admits It Rolled Semi Truck Prototype Down a Hill in 2018 Promo Because It Couldn't Drive
9. 14. 20
Read More
Hydrogen Beast
This Beast of a Hydrogen-Powered Hypercar Has a 1,000 Mile Range
8. 12. 20
Read More
Moon Rover
See the Moon Rover Toyota Is Building for Japan's Space Program
3. 12. 19
Read More
+Social+Newsletter
TopicsAbout UsContact Us
Copyright ©, Camden Media Inc All Rights Reserved. See our User Agreement, Privacy Policy and Data Use Policy. The material on this site may not be reproduced, distributed, transmitted, cached or otherwise used, except with prior written permission of Futurism. Articles may contain affiliate links which enable us to share in the revenue of any purchases made.
Fonts by Typekit and Monotype.