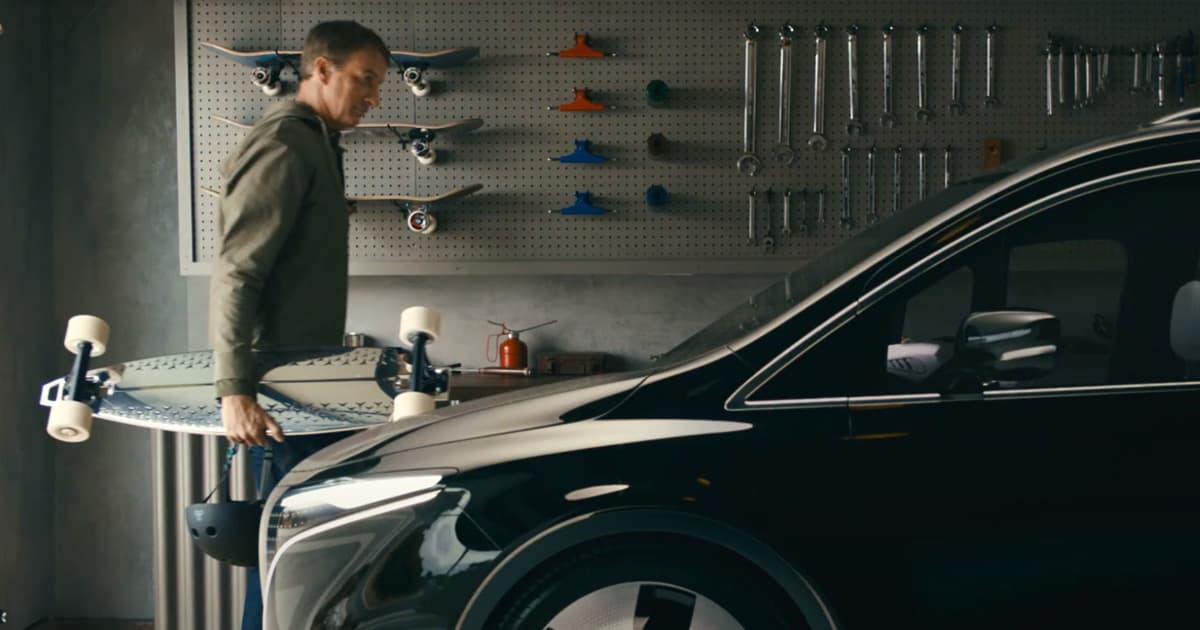 "Hey Tony, why did you switch to electric?"

"Hey Tony, why did you switch to electric?"

In the ad, Hawk can be seen zipping through an urban landscape on the advanced form of transport.

"Hey Tony, why did you switch to electric?" an onlooker asks Hawk.

"I got my reasons," he replies, before the reveal of the new vehicle.

How cool is that? Check-out my collab clip with @mercedesbenz, who have just revealed their #ConceptEQT. #ad pic.twitter.com/J60MjaYK80

Hawk then slots the longboard into a charging port built into the back of the carmaker's new EQT Concept, a fully electric minivan aimed at "families and fans of sports and other recreational activities," according to a press release.

The EQT, which premiered today, is part of Mercedes' foray into the all-electric market. The brand is planning to release its flagship sedan, the EQS, some time next year. Early impressions of the EQS were largely positive for its luxurious looks and finishes — and a gigantic 56-inch touchscreen.

Today's reveal, however, shows off a minivan that isn't quite ready to go into series production just yet. It will eventually be available, though, in both five and seven seat configurations and feature sliding doors and a sizeable luggage compartment in the back.

In other words, Hawk will be able to easily stuff his entire family inside the van — as well as a whole bunch of skateboards and longboards in the back.

A gas-fueled T-Class will come first some time next year, with an all-electric version to follow.

No word, however, on the availability of a Mercedes-made electric longboard. That part, unfortunately, was most likely just a publicity stunt to get people talking about the EQT.

Netflix and Drive
Mercedes Claims to Have Achieved Level 3 Automation, Beating Tesla
Jan 30
Read More
Formula E
Mercedes-Benz' First All-Electric Racecar Is Equipped Like a Beast
3. 4. 19
Read More
Mercedes-Benz Just Unveiled New All Electric Plans
11. 22. 17
Read More
+Social+Newsletter
TopicsAbout UsContact Us
Copyright ©, Camden Media Inc All Rights Reserved. See our User Agreement, Privacy Policy and Data Use Policy. The material on this site may not be reproduced, distributed, transmitted, cached or otherwise used, except with prior written permission of Futurism. Articles may contain affiliate links which enable us to share in the revenue of any purchases made.
Fonts by Typekit and Monotype.