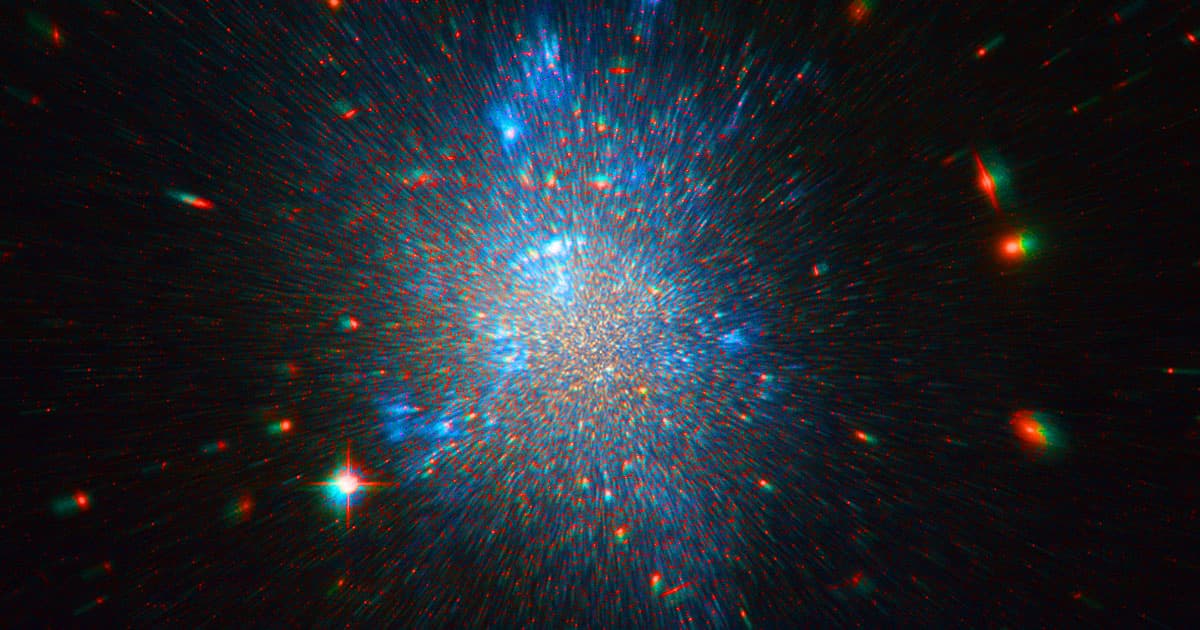 Scientists Unraveled Why Some Tiny Galaxies Have Huge Black Holes

In the farthest reaches of the universe, there are some galaxies with perplexing forms.

These galaxies, called blue nuggets due to their high concentration of blue-colored stars, are considerably smaller than average — but are home to mind-bendingly gargantuan supermassive black holes. Now, according to Space.com, astronomers think they've identified how the galaxies' development was stunted in the early days of the universe.

These blue nuggets churned out baby stars much faster than a typical galaxy would thanks to jets of nearby cosmic gases that fired the metaphorical furnace, according to research accepted for publication in the journal Monthly Notices of the Royal Astronomical Society that was shared on the preprint server ArXiv.

The blue nuggets' central black holes also fed on those cosmic gases, inflating to enormous sizes. As Space.com puts it, the poor overstuffed black holes had no choice but to commit a party foul of cosmic proportions and vomit all over the rest of the galaxy — eruptions so powerful that they shut down star formation, freezing the bizarre galaxies in time.

More on black holes: These Bizarre Objects May Have “Seeded” Supermassive Black Holes

Falling In
Objects We Thought Were Black Holes May Actually Be Wormholes, Scientists Say
Nov 15
Read More
Black Hole Snapshot
Scientists Release Image of Black Hole at Center of Our Galaxy
May 12
Read More
Space Lumps
Scientists Say We May Be Extremely Wrong About the Universe
Apr 28
Read More
+Social+Newsletter
TopicsAbout UsContact Us
Copyright ©, Camden Media Inc All Rights Reserved. See our User Agreement, Privacy Policy and Data Use Policy. The material on this site may not be reproduced, distributed, transmitted, cached or otherwise used, except with prior written permission of Futurism. Articles may contain affiliate links which enable us to share in the revenue of any purchases made.
Fonts by Typekit and Monotype.