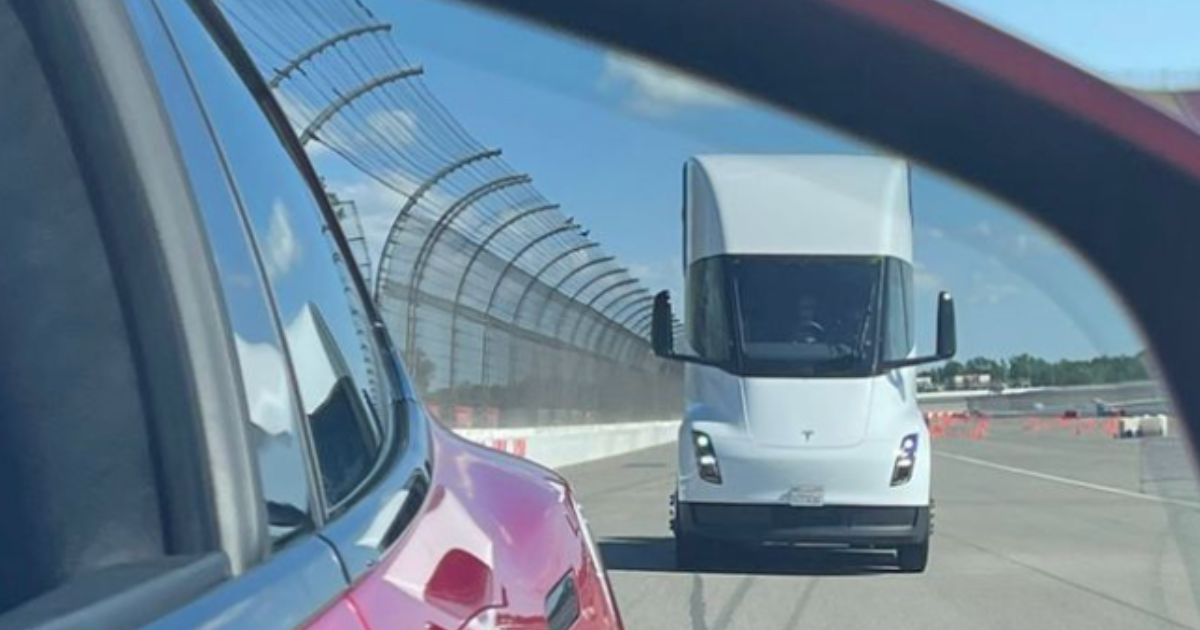 Watch the Tesla Semi Show Off at a Speedway

"Need to see them on the streets."

"Need to see them on the streets."

The sleek white exterior of Tesla's electric Semi looks more than a luxury RV than an 18-wheeler.

The curvaceous cab drove through a Michigan speedway with lights a-blazing, and a Tesla owners club shared video of the moment on Twitter yesterday. The official Tesla Instagram page originally posted the footage to its stories, but that will disappear after 24 hours.

The Semi wasn't pulling a trailer or cargo, but it was joined by the equally elusive Cybertruck.

Comments on the public appearance were mostly positive, but some seemed frustrated with how long Tesla and its rather infamous CEO, Elon Musk, are taking to deliver on their EV promises.

"Need to see them on the streets in customers hands," one netizen lamented.

Another called Musk out specifically.

The Semi, which Tesla estimates will cost less than $200,000, has been in testing for a while.

The company kept several Semis originally designated to be delivered to Pepsi Co for more tests, according to a news site dedicated to the electric auto manufacturer called Drive Tesla Canada. The Semis were supposed to be delivered earlier this year.

In theory, the vehicle is more aesthetic and would be more eco-friendly than gasoline-powered competitors. But so far it's going the way of the Cybertruck — overpromised, undelivered and with unknown wait times.

You might not be able to haul a trailer with the electric Ford-F150 Lightning, but at least some people already have their orders.

Tela Ransomware
Tesla Cuts Car's Range By 30%, Demands $4,500 to Get It Back
Jul 26
Read More
Where's Musko
7 Theories About Why Elon Musk Has Disappeared
Jul 1
Read More
Charged Up
Startup Says Amazing New Battery Lets EVs Drive 400 Miles, Recharge in 15 Minutes
Jun 22
Read More
+Social+Newsletter
TopicsAbout UsContact Us
Copyright ©, Camden Media Inc All Rights Reserved. See our User Agreement, Privacy Policy and Data Use Policy. The material on this site may not be reproduced, distributed, transmitted, cached or otherwise used, except with prior written permission of Futurism. Fonts by Typekit and Monotype.