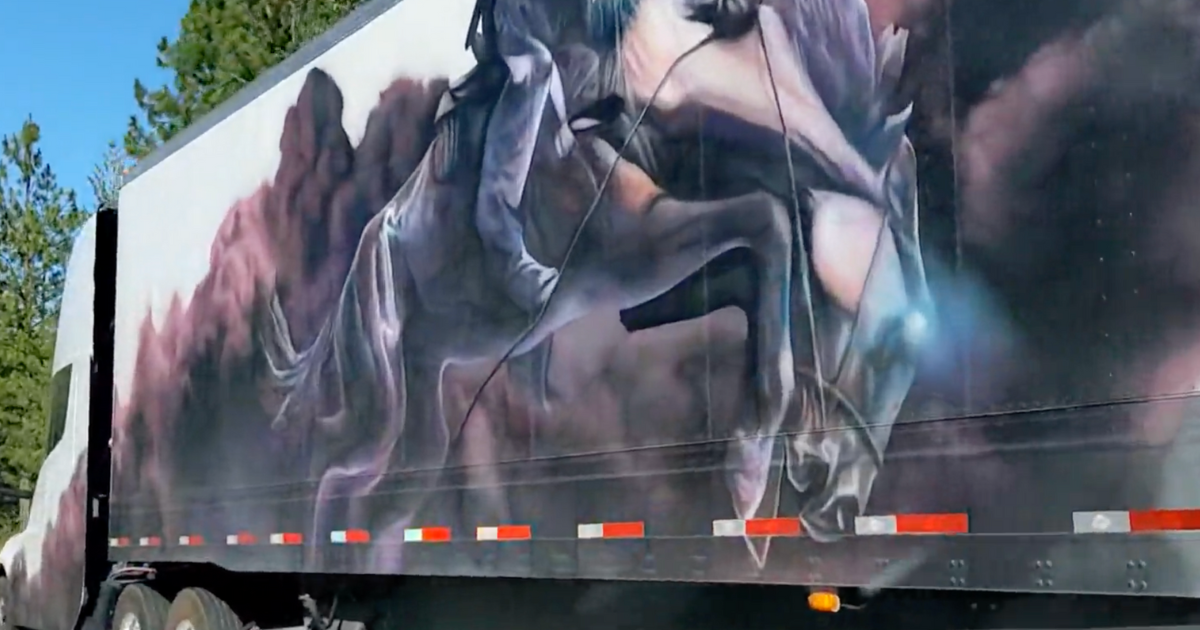 Tesla Semi Spotted With Huge Mysterious Mural on Its Side

"I’m going to drive next to it for milesssssss to admire it."

"I’m going to drive next to it for milesssssss to admire it."

There may not be many Tesla Semis on the road yet — the truck is still under active development, with plans for commercial production not planned until 2023 — but a prototype spotted by a Reddit user yesterday would stand out from the rest regardless.

The electric tractor trailer was filmed in a short 11-second clip heading west on I-80 in California, and it sports a pretty gnarly mural of a rider on a horse with ghoulish blue eyes. The horse bucks as purple smoke billows in the background of the image, extending all the way to the cab.

The post has since received more than 3,500 upvotes, a testament to Tesla fans' devotion. One commenter said they would've followed the truck for a while just to get a better look.

"When I see one in person on the road, I’m going to drive next to it for milesssssss to admire it," an apparent super fan said.

The enthusiasm and demand might exist for Tesla's Semi, but the supply certainly doesn't.

Earlier today Elektrek reminded readers that the automaker's first Semi prototype debuted in 2017. At the time, CEO Elon Musk said Semis would be available by 2019, but continuous delays have pushed the delivery date back to next year, a years-long delay that should be familiar to observers of Muskworld timelines. Elektrek also speculated that given the truck's location and route it was most likely hauling a load for the company itself.

Given that some customers have already gotten frustrated enough with Cybertruck delays to purchase a Ford Lightning instead, let's hope this isn't the Cowboy Semi's last rodeo.