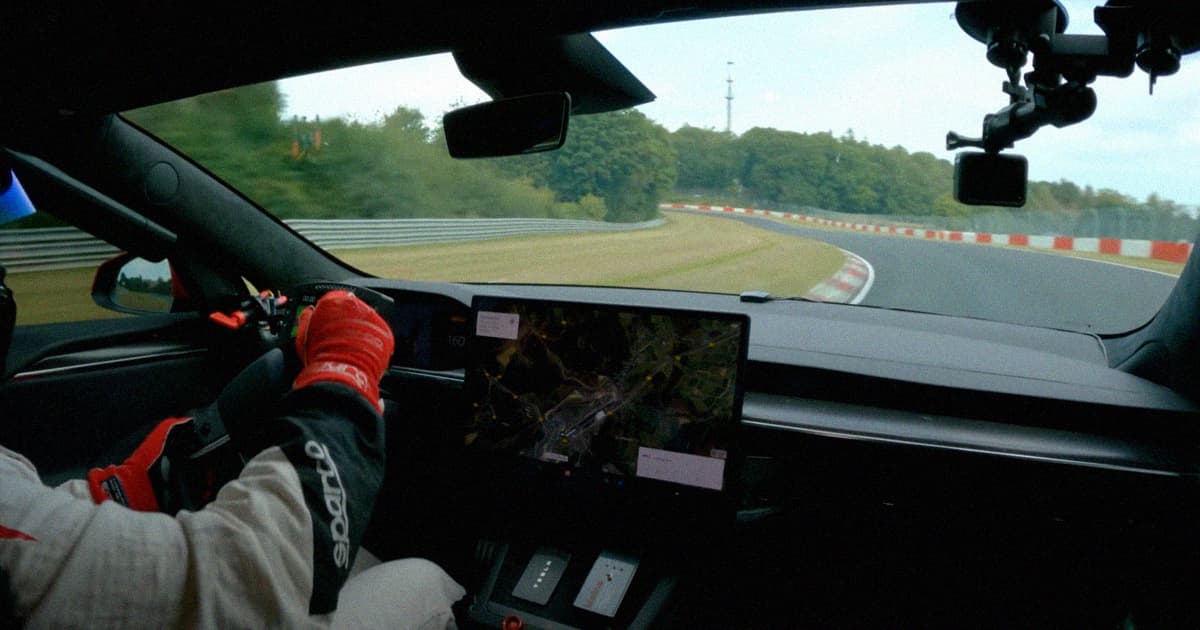 Tesla has shared a video of its Model S Plaid supercar ripping around the world-famous Nürburgring racecar track in Germany, setting an official full lap time of 7:35, a world record for a production EV.

It's an impressive feat for what was the already quickest production car ever made.

The seven minute video shows the driver — controversial "yoke" steering wheel in hand — ripping around tight corners at over 60 mph. The car even crosses the 160 mph (260 km/h) threshold during a straightaway.

Since it relies entirely on battery power, noises are limited to an atmospheric whooshing and whining — a far cry from traditional combustion engine-powered track cars.

According to InsideEVs, the next best time was set by the Porsche Taycan Turbo in August 2019, whipping around the track in 7 minutes and 42 seconds — and putting it a full seven seconds behind Tesla's new record.

In September 2019, rumors surfaced that a modified Model S had completed a lap in just 7 minutes and 23 seconds. The times were never verified, however, and the car likely featured some heavy modifications, unlike the factory Model S Plaid seen in this week's video.

The Plaid variant sports some impressive specs. It can accelerate from 0 to 60 mph in less than 2 seconds, a truly impressive feat that absolutely crushes some of the fastest gas-powered hypercars in existence. It also has an impressive EPA-rated range of 348 miles. The Taycan Turbo, in contrast, can only go 200 miles.

It's an impressive feat that sets a new benchmark for modern consumer cars. It's now up to Tesla's competitors to take that even further.

More on the Plaid: Tesla Model S Plaid Fastest Production Car Ever Made