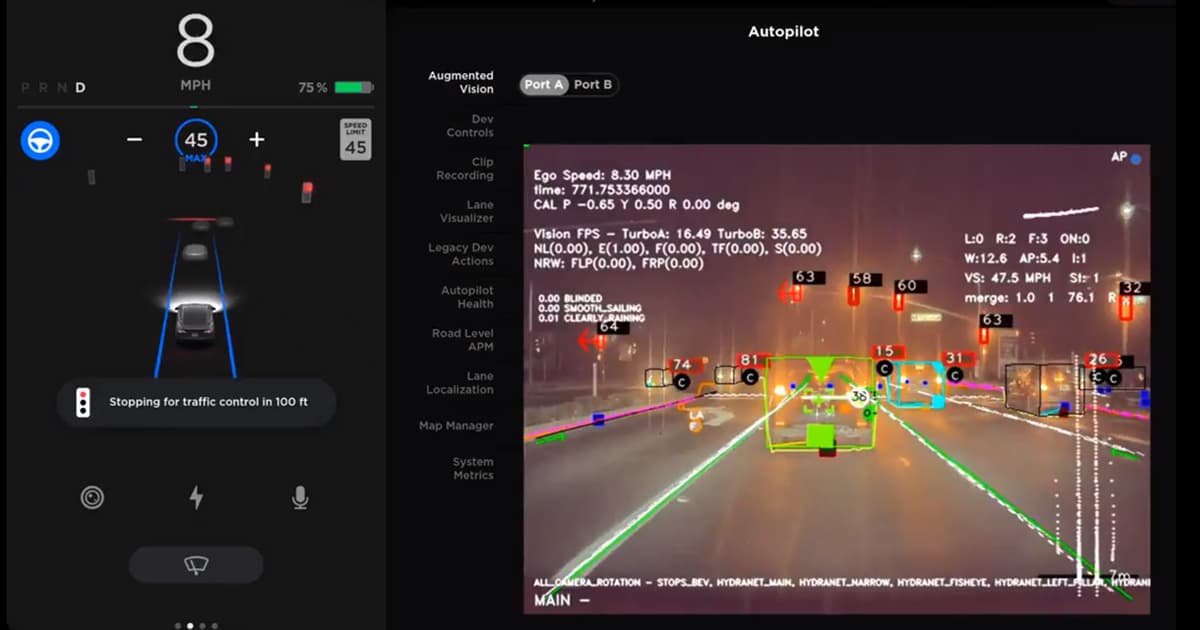 There appear to be numerous upcoming self-driving features buried in Tesla's code.

There appear to be numerous upcoming self-driving features buried in Tesla's code.

While digging through the code of their Tesla's Full Self-Driving feature, a noted Tesla hacker-owner who goes by the handle "green" found an augmented reality view of everything the vehicle is capable of seeing in vivid detail, Teslarati reports.

The Elon Musk-led company began rolling out its Full Self-Driving beta in October, allowing a select group of Tesla owners to test the feature.

In several videos posted to Twitter, the hacker showed off "the much coveted augmented reality view." They also spotted "tons of dead code" including snippets that may hint at possible features to be released later down the road including "coast2coast" and "map selection."

the much coveted augmented reality view!

(perfect "stop line" detection I must say, only 31% probability of indoors though which is a bit of a bummer.)
Interestign that A/B nodes vision fps is different (both far from 36fps nominal though!) pic.twitter.com/aj1L1wBvUN

The self-driving features suite is a $10,000 option that's slated for a substantial update, which Musk promised in August will be a "quantum leap, because it’s a fundamental architectural rewrite, not an incremental tweak."

Early beta testers found that with the new feature turned on, their dashboard started glittering with glowing, colored lines outlining everything the vehicle's neural network "sees" — but not overlaid over a live feed of the vehicle's cameras, as green managed to find.

Development tools of the Full Self Driving beta uncovered by the pseudonymous green also hint at other potential features including "California Stop," "California Boost," and "Chiropractor Adjust Skeleton." It's unclear what any of these features will turn out to be — if any of them are ever released to the public.

In October, Musk said that he expects the FSD update to roll out to the public as soon as the end of this year. It's still unclear if Tesla will be able to meet that deadline.

More on the beta: Tesla Bros Are Freaking Out Right Now About the New Full Self-Driving Beta