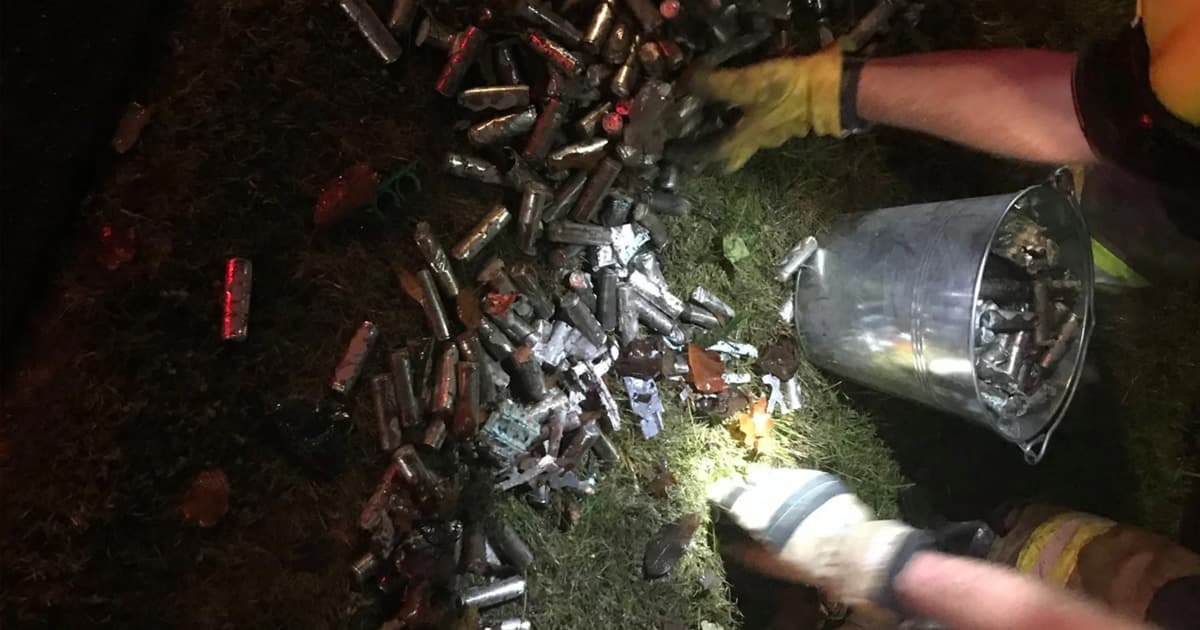 The local fire and police departments now have to track down hundreds of battery cells.

The local fire and police departments now have to track down hundreds of battery cells.

A Tesla driver slammed his 2019 Model S through a power pole and multiple trees after losing control at 100 mph in Oregon this week, local news station Fox 12 reports.

The vehicle carried so much momentum that it broke apart, sending hundreds of small battery components hurtling through the air, breaking through nearby windows and even catching a bed on fire.

In a testament to Tesla's engineering prowess, the driver walked away unscathed. In fact, heavily under the influence of marijuana, he decided to flee the scene. But the motorist, later identified as Dylan Milota, only got three blocks before first responders and the police caught up with him, Fox 12 reports.

Milota was cited at the hospital for several offenses, including hit and run, as well as reckless driving and endangering.

Now, the local police and fire departments have the messy job of tracking down all the batteries that were sent into people's homes near the crash site. And that could take a while — a Tesla Model S battery consists of a total of 444 individual "18650" cells, each only slightly larger than a standard AA battery.

The police are asking the public to report to them if they find any of these cells. Disposing of the batteries may be dangerous as they can cause burns or release toxic fumes.

From Our Partners
Build A Robotic Toy Car With This DIY Self-Driving Vehicle Kit
9. 26. 21
Read More
From Our Partners
Build Your Own Self-Driving Car With This DIY Kit
9. 3. 21
Read More
From Our Partners
Make STEM Exploration A Family Activity With These Ten DIY Kits
7. 30. 21
Read More
+Social+Newsletter
TopicsAbout UsContact Us
Copyright ©, Camden Media Inc All Rights Reserved. See our User Agreement, Privacy Policy and Data Use Policy. The material on this site may not be reproduced, distributed, transmitted, cached or otherwise used, except with prior written permission of Futurism. Fonts by Typekit and Monotype.