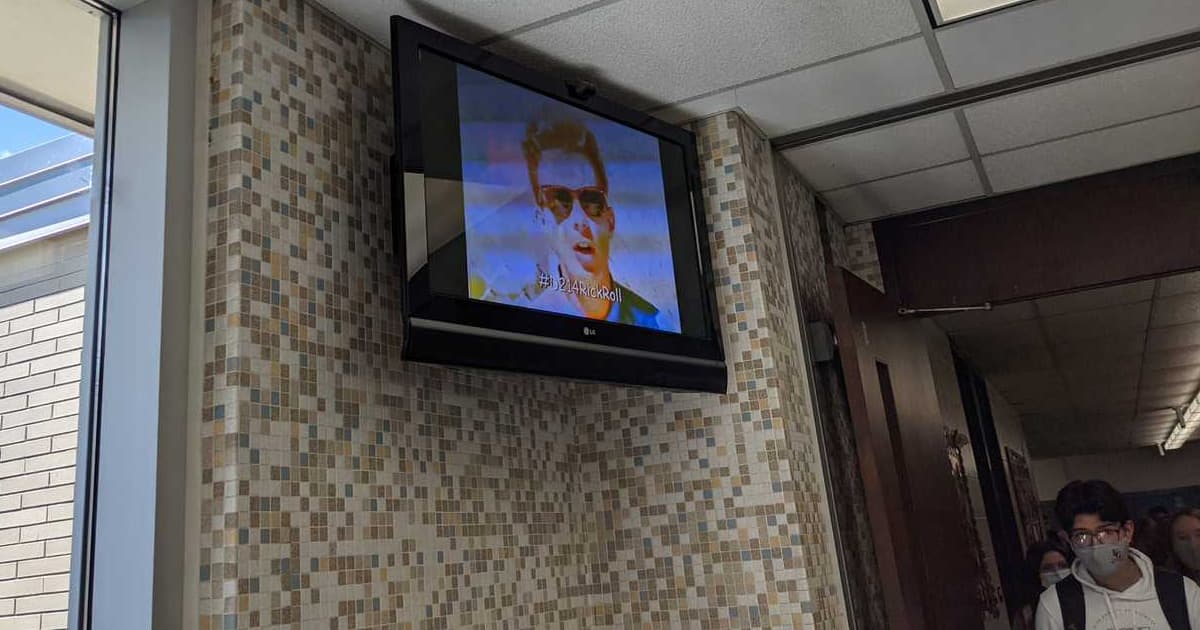 Never Gonna Give You Up

And in perfect synchronization.

And in perfect synchronization.

In April, an enterprising 14-year-old high school student and white hat hacker caused all displays in every school making up the Township High School District 214, the second-largest high school district in Illinois, to play the music video to Rick Astley's 1980s hit "Never Gonna Give You Up."

In other words, the student literally rickrolled their entire school district — and in perfect synchronization. A video of the event, dubbed "the Big Rick," shows every school projector playing the video and blaring the song at exactly the same time.

Can we PLEASE give it up to the cyber genius of a senior that managed to respectfully prank the entire district by Rick Rolling thousands during passing periods & left a good note for the #Classof2021 👍 Bravo & use those smarts to change the world! #seniorprank #d214rickroll pic.twitter.com/dKZt5PPYlD

The teen, who goes by the moniker WhiteHoodHacker, explained the big exploit in a post on their website. First, with the help of other volunteers, they scanned all IP addresses of every device in the district's network.

"Our scanning generated so much traffic that our school's technology supervisor caught wind of it and came in at one point to ask us to stop," the hacker writes. "From the results, we found various devices exposed on the district network. These included printers, IP phones... and even security cameras without any password authentication!"

The prolific team even managed to gain control over all bell schedules in the district after discovering most of the servers serving content and announcements to students were using the same login credentials.

The hackers were fully aware that what they were doing was illegal, but the team "prepared complete documentation of everything we did, including recommendations to remediate the vulnerabilities we discovered."

The team even made sure the rendition of Rick Astley's hit single was not disrupting classes or AP standardized testing, which began the following day.

After the ruse was up, the students sat down with the administration — instead of letting them down and deserting them, if you will — to help them fix their clearly less-than-stellar cybersecurity.

"We even managed to get the district to look into expanding the IT/cybersecurity program and hopefully, sponsoring a D214 [hacking competition]," the blog reads.

More on hacking: Elon Musk Mocks “Anonymous” For Threatening Him

Sobering News
Ukrainian Hackers Allegedly Cut Off Russian Soldiers' Beloved Vodka Supply
May 7
Read More
All Tomorrow's Hackers
Grimes Says She Got Hackers to Shut Down a Blog She Didn't Like
Mar 26
Read More
Bitcoin & Clyde
Feds Arrest Crypto CEO for Bitcoin Laundering, But Her Real Crime Was Against Rap Music
Feb 8
Read More
+Social+Newsletter
TopicsAbout UsContact Us
Copyright ©, Camden Media Inc All Rights Reserved. See our User Agreement, Privacy Policy and Data Use Policy. The material on this site may not be reproduced, distributed, transmitted, cached or otherwise used, except with prior written permission of Futurism. Fonts by Typekit and Monotype.