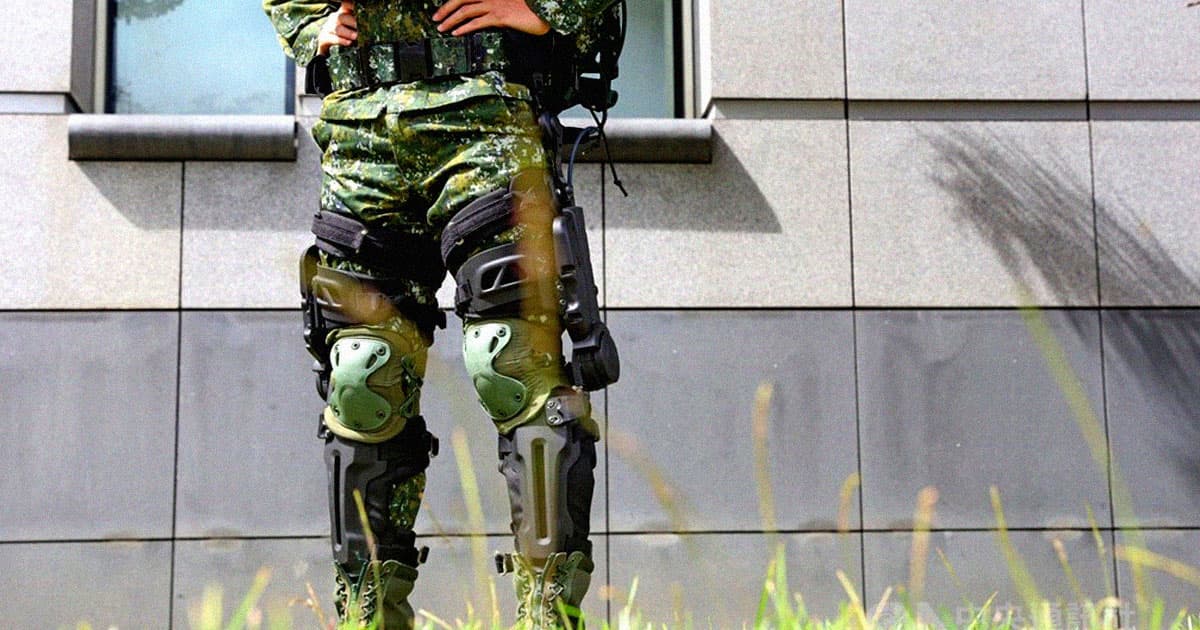 Taiwan says it’s created a battery-powered exoskeleton suit that can allow its soldiers to run faster and carry heavy objects with ease.

The first-generation suit was engineered by the country’s go-to weapons manufacturer, the National Chung-Shan Institute of Science and Technology, according to The South China Morning Post. The suit is a part of a four year project dubbed the "Taiwan Ironman program," which a modest budget of $5.74 million and the goal providing Taiwan’s soldiers with a lower-body exoskeleton to enhance their strength and endurance.

"To reduce fatigue of soldiers in carrying heavy facilities... we started developing the powered suit for the military in 2020," Jen Kuo-kuang, head developer of the project, said in comments at a news conference obtained by the SCMP.

Jen told reporters that the suit reduces stress on the leg and hip joints, allowing its wearer to lift and carry heavier objects over greater distances, and at speeds up to four miles per hour.

"They can be used in field operations and movement of ammunition and heavy-duty weapons, and can increase the mobility and efficiency of the troops in wartime and post-disaster rescue missions," Jen said at the conference.

Taiwan currently has plans to develop a version 2.0 of the suit, which it says will enable users to carry up to 220lbs of weight. Jen added that this could be helpful in helping moving the injured during battle.

Battle of the Exoskeletons

This all comes in the backdrop of rising tensions between Taiwan and mainland China, which still views the island as its territory. Despite official US statements urging peace, China scrambled a number of warplanes into Taiwanese airspace earlier this month.

Earlier this year, China's People’s Liberation Army also unveiled a similar suit for its soldiers’ use. So yeah, two warring nations with soldiers battling in exoskeletons might actually become a reality — which would honestly be kinda cool, if it wasn’t also darkly apocalyptic.

Checking In
Doctor Who Gene Edited Babies Rejects Death Penalty Rumor
1. 9. 19
Read More
Paralyzed Man Uses Exoskeleton to Run Race for Policy Change
4. 12. 17
Read More
Can Science Transform Us Into Superheroes?
3. 22. 17
Read More
+Social+Newsletter
TopicsAbout UsContact Us
Copyright ©, Camden Media Inc All Rights Reserved. See our User Agreement, Privacy Policy and Data Use Policy. The material on this site may not be reproduced, distributed, transmitted, cached or otherwise used, except with prior written permission of Futurism. Articles may contain affiliate links which enable us to share in the revenue of any purchases made.
Fonts by Typekit and Monotype.