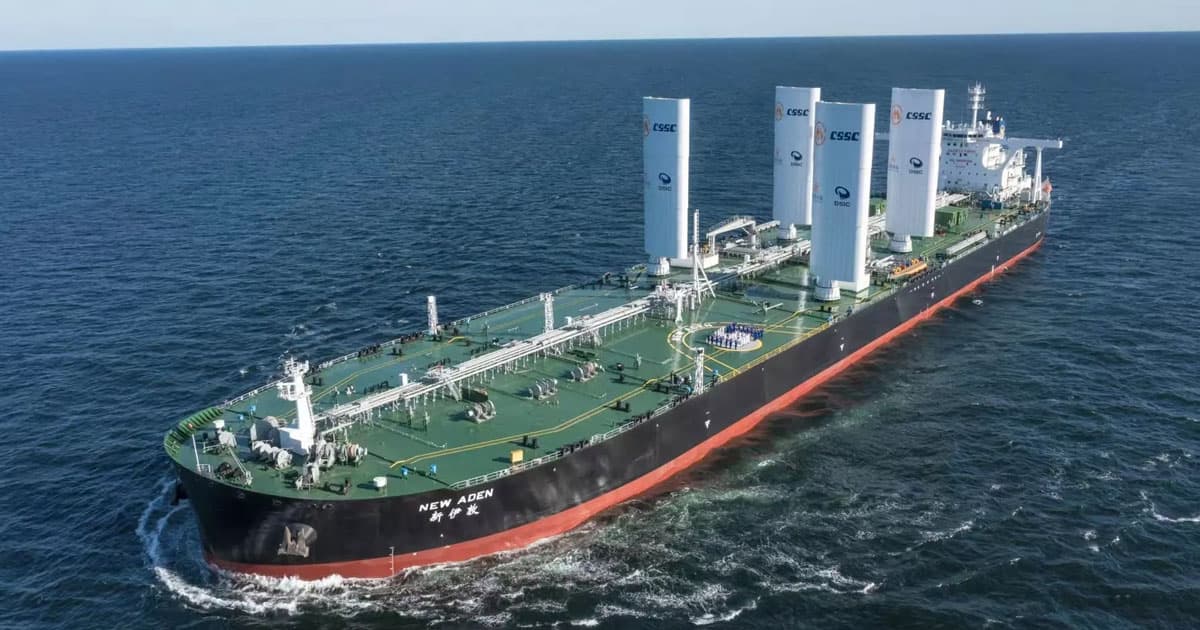 Sails are making a big comeback.

Sails are making a big comeback.

A new crude oil supertanker launched by the China Merchant Energy Shipping company is making use of four large sails to reduce its fuel consumption.

And with great results: the four 130-foot masts cut down the supertanker's fuel consumption by an impressive 9.8 percent, the company says, proving once and for all that relying on strong wind currents to cross our planet's oceans still makes sense in the 21st century.

The vessel looks nothing like the sailing ships of old. The ship, which is more than 1,000 feet long and dubbed "New Aden," launched late last month and features four lightweight carbon fiber composite blades that can be electronically raised or lowered.

An autonomous computer system monitors the current conditions and continually adjusts the angles of these sails to make the best use of available air currents.

While the ship still primarily relies on massive diesel engines, the company estimates that the sail system could save over 2,900 tons of carbon dioxide emissions when travelling from the Middle East to China.

It's not the first time we've heard of the use of rigid sails to reduce fuel consumption. Back in 2016 for instance, Japanese renewable energy systems company Eco Marine Power (EMP) came up with an even more ambitious design that relies on rigid sails as well as solar panels and energy storage modules for propulsion.

But, as is the case with many other concepts like it over the last decade or so, EMP's zero emission ship has yet to be built.

Sure, the ship is still designed to carry around two million barrels of environmentally damaging fossil fuels. But at the very least, this is a step in the right direction.

More on supertankers with sails: New Ship With Rigid Solar Sails Harnesses the Power of Sun and Wind at the Same Time

Weird Times
White House Brags That America Is Producing More Oil and Gas Than Ever
Mar 7
Read More
EVs Can't Change the World Until We Change How We Sell Them
5. 22. 18
Read More
Green Energy: Good For The Planet, Bad For Fossil Fuel Workers
5. 9. 18
Read More
+Social+Newsletter
TopicsAbout UsContact Us
Copyright ©, Camden Media Inc All Rights Reserved. See our User Agreement, Privacy Policy and Data Use Policy. The material on this site may not be reproduced, distributed, transmitted, cached or otherwise used, except with prior written permission of Futurism. Articles may contain affiliate links which enable us to share in the revenue of any purchases made.
Fonts by Typekit and Monotype.