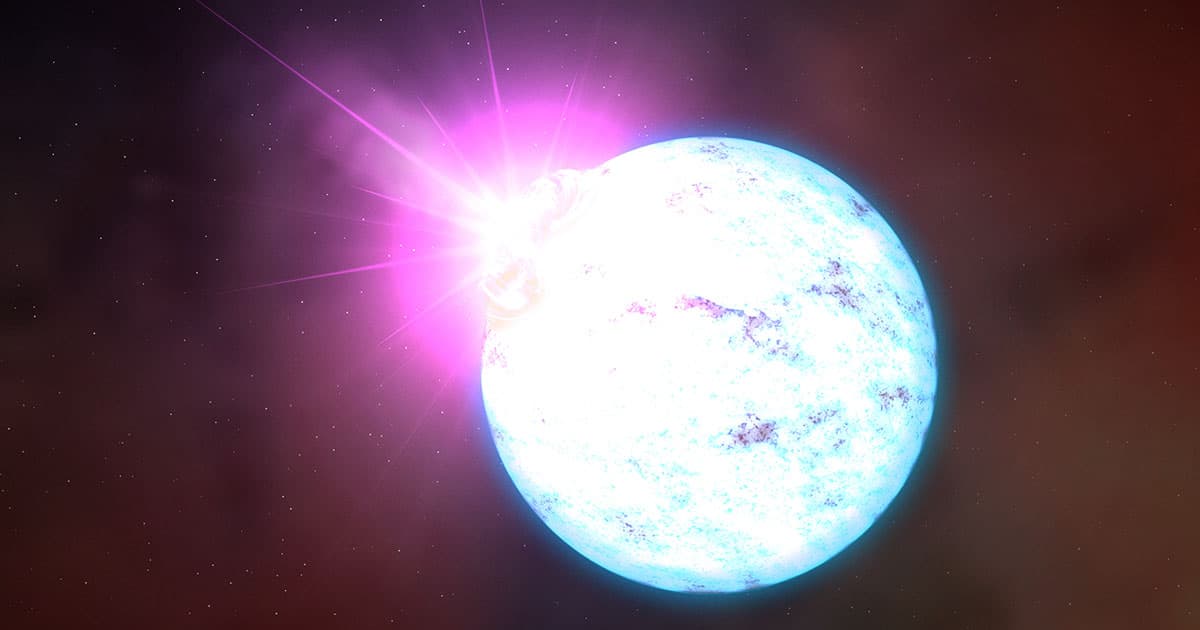 Scientists studying a group of stars made an astonishing but "serendipitous" discovery when they realized that Gamma Columbae, a fairly average celestial body, might actually be the "stripped pulsating core of a massive star," according to a study published this week in Nature Astronomy.

If true, that means Gamma Columbae is missing the envelope, or vast shroud of gas, that hides a star's nuclear fusion powered core.

What caused the stripping of this atmospheric envelope is not definitively known, but the scientists posit that Gamma Columbae running out of hydrogen could've caused its envelope to expand and swallow up a nearby star, likely its binary partner. But in the middle of that relatively common process, something appears to have horrifically gone wrong and ejected the envelope — and possibly even led to the two stars merging.

Before the disaster, the scientists believe Gamma Columbae could have been up to 12 times the mass of our Sun. Now, it's a comparatively meager 5 stellar masses.

Although a naked stellar core missing its envelope has been theorized to exist, it's never been observed in a star this size.

"Having a naked stellar core of such a mass is unique so far," said study co-author Norbert Pryzbilla, head of the Institute for Astro- and Particle Physics at the University of Innsbruck, in an interview with Vice.

Astronomers had an idea of what the cores of massive and low mass stars looked like, Pryzbilla continued, but there wasn't "much evidence" for cores of masses in between.

It's an exceedingly rare find because the star is in a "a short-lived post-stripping structural re-adjustment phase" that will only last 10,000 years, according to the study.

That's "long for us humans but in astronomical timescales, very, very short," Przybilla told Vice. "It will always stay as a peculiar object."

The opportunity to study such a rarely exposed stellar core could provide scientists an invaluable look into the evolution of binary star systems. And whatever astronomers learn from the star, it's a fascinating glimpse at stellar destruction at a nearly incomprehensible scale.

Teardrop or Football?
Scientists Discover "Peculiar" Teardrop-Shaped Star
3. 10. 20
Read More
Pizza Personnel
Domino's Buying Hundreds and Hundreds of Electric Delivery Vehicles
Wednesday
Read More
Another One
Coinbase May Be in Real Serious Trouble Now
Wednesday
Read More
+Social+Newsletter
TopicsAbout UsContact Us
Copyright ©, Camden Media Inc All Rights Reserved. See our User Agreement, Privacy Policy and Data Use Policy. The material on this site may not be reproduced, distributed, transmitted, cached or otherwise used, except with prior written permission of Futurism. Articles may contain affiliate links which enable us to share in the revenue of any purchases made.
Fonts by Typekit and Monotype.