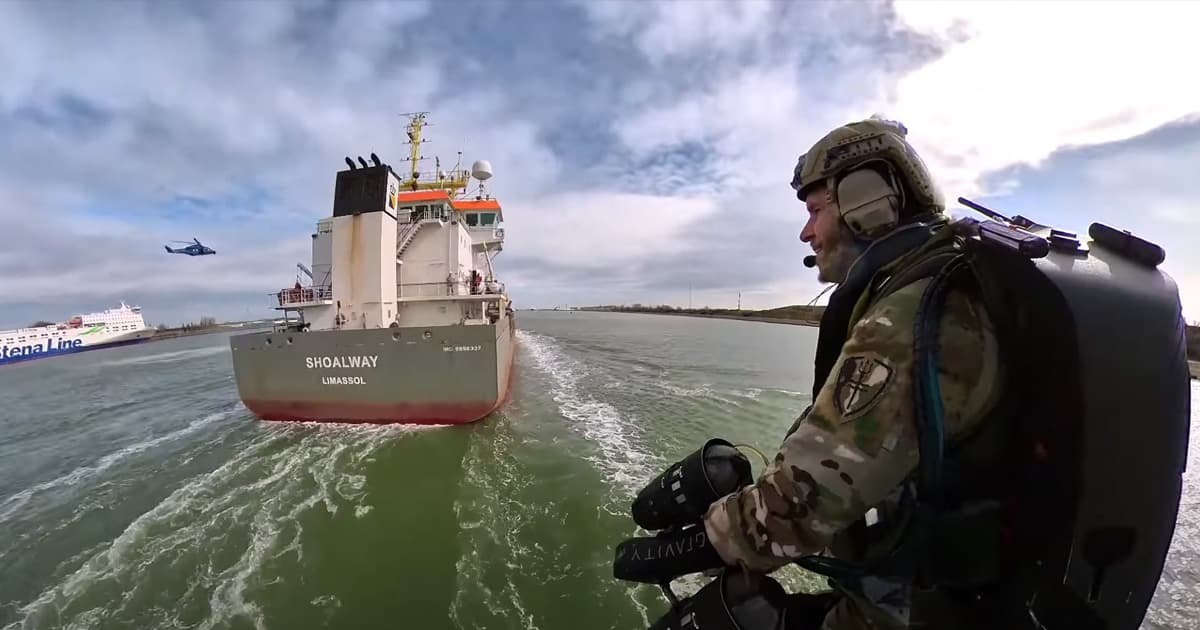 How to board a ship in style.

How to board a ship in style.

In a new video released by jetpack maker Gravity Industries, a jetsuit-wearing special ops soldier from the Netherlands Maritime Special Operations Force can be seen boarding a ship — by flying there from a nearby pursuit vessel.

It's a spectacular demonstration of Gravity Industries' flying technology. Rather than having to pursue and approach the ship in the tailing vessel, the jetpack-enhanced soldier simply takes to the skies and effortlessly lands on the deck of the ship — in a fraction of the time boarding would have taken otherwise.

Gravity has quickly emerged as one of the biggest players in the jetpack field over the last few years, offering its jetsuit technologies to first responders and military forces around the world. It has even allowed journalists to give the suit a test drive, albeit with safety tethers.

The company's "Iron Man"-like jetpack suit combines an impressive 1,050 horsepower of thrust, from four mini jet engines strapped to each forearm, with the dexterity and balance of its wearer.

Thanks to that immense power, Gravity Industries founder Richard Browning was able to reach the "fastest speed in a body controlled jet engine powered suit," according to the Guinness Book of World Records, back in 2019.

The company is set to release its successor to its jetsuit, a fully stabilized flying autonomous motorcycle called “Speeder” that can seat up to two individuals and reach speeds beyond 250 mph.

"Right now, we are stuck in cars, long distances require driving to an airport and getting on a plane," famed venture capitalist Tim Draper, early investor for both SpaceX and Tesla, told CNBC in December after announcing he had made major investments in Gravity Industries.

"Imagine you can just strap on a jetsuit and take off and fly where ever you want to go," he added. "I think [vertical take off and landing] technology is what we are all looking for."

More on Gravity: A Tesla Investor Is Pouring Money Into Jetpack Technology