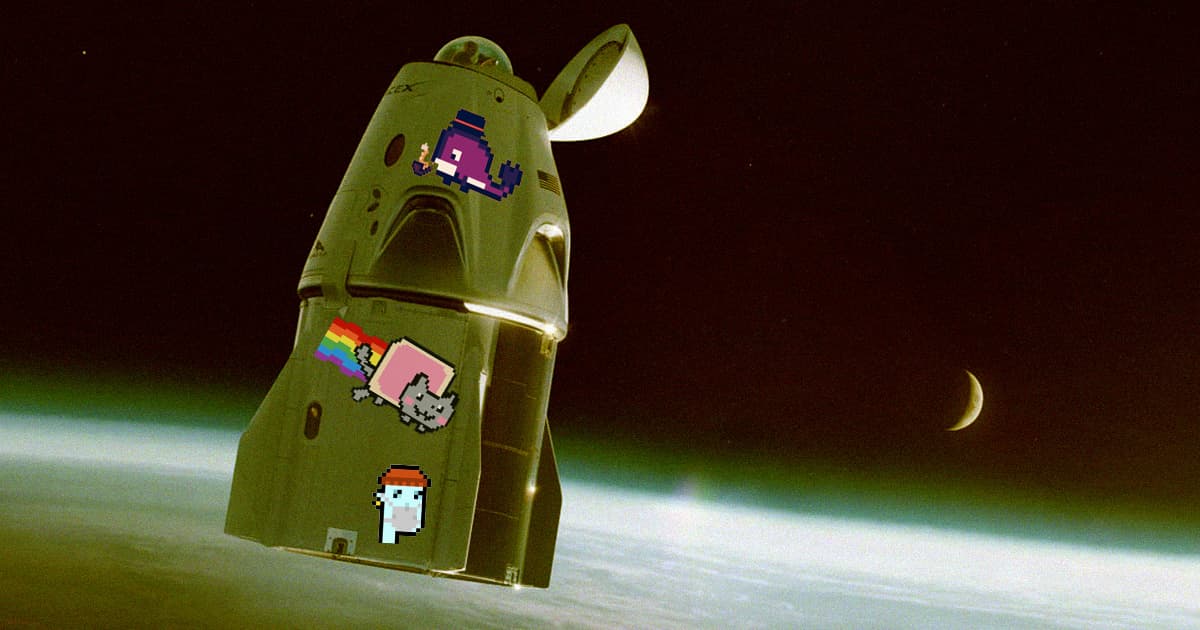 SpaceX Tourist Spacecraft Will Be Loaded With Dozens of NFTs

Next week, the Inspiration4 mission, an all-civilian crew of space tourists, will careen into space on board a SpaceX Crew Dragon module. And flying with them will be dozens of non-fungible tokens (NFTs), according to Space.com, in an attempt to raise money for charity by capitalizing on the trendy digital certifications of authentication being bought, sold, and traded over the blockchain.

The Inspiration4 mission, led by billionaire Jared Isaacman, aims to raise $200 million for St. Jude's Children's Research Hospital, in part by auctioning off the 50 NFTs that are hitching a ride. Chief among them is an NFT certifying ownership of an unreleased recording of the Kings of Leon song "Time in Disguise," according to an Inspiration4 press release.

"We're honored to participate in this historic journey in an effort to raise money for St. Jude, and we’re sending all our best to the crew of Inspiration4," Kings of Leon said in the release.

Of course, it would arguably be more cost effective to simply give money to charity than to cross your fingers and hope someone else will be inspired to bid higher for something that went to space at a charity auction.

But that hasn't stopped Isaacman, who previously announced that the mission would also be carrying 66 pounds of "space hops" that he hoped to auction off to a (terrestrial) brewery to make beer with. After raising absolutely no interest in the auction, according to Isaacman's tweets, Isaacman seems to have struck a $100,000 deal with Sam Adams maker Boston Beer Company, according to the release.

As Space.com notes, these aren't the first NFTs to reach space, though it will be the largest quantity of them shipped into orbit at the same time. Previously, a recording of Claude Debussy's "Clair de Lune" made a round trip to the International Space Station, and other NFT art projects have been launched into space as well.