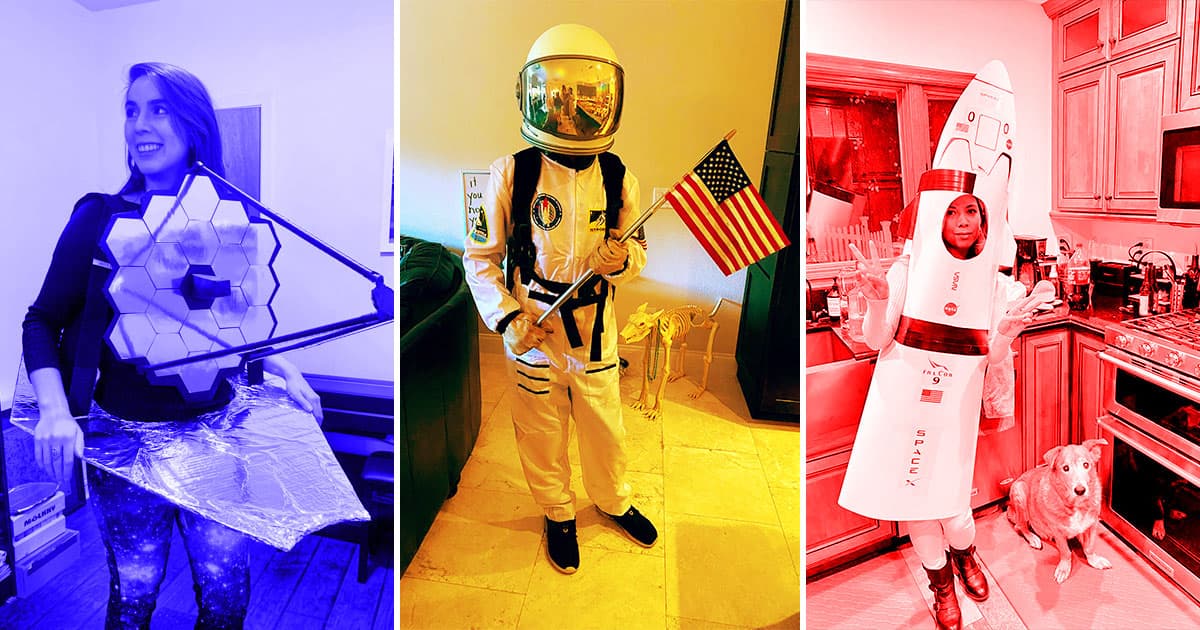 Here Are the Coolest Space-Themed Halloween Costumes We Could Find

This flat Earth costume is a bit of a head scratcher.

This flat Earth costume is a bit of a head scratcher.

But the more daring among us ventured skyward for 2021's spookiest occasion. From rockets to space telescopes, space enthusiasts showed up in full force this year. So without much further ado, here are some of the most awesome space-themed outfits we saw.

Twitter user April Santos got out the duct tape and white poster board for a impressively accurate Falcon 9 and Crew Dragon spacecraft, both from SpaceX's fleet.

Our rating: four sick space tourists out of five. Her dog, however, didn't seem as impressed.

My Falcon 9 and Crew Dragon costume. Made everything from scratch ☺️ @elonmusk pic.twitter.com/jaishU9Dm9

Twitter user The Flat Earther — presumably facetious? — put on an off-the-shelf astronaut costume and added a pair of inflatable armbands and swim ring. Because you'd just fall off the edge? Or find more water? Or something?

Halloween costume, if you want to go into space you need to learn to swim. pic.twitter.com/tg8DWmSHyT

Self-anointed "astronaut wrangler" Christina Korp spotted "one of our neighbor's kids" dressed up as Neil Armstrong, the first person to walk on the Moon.

Our rating: five giant leaps out of five.

One of our neighbor’s kids said he was Neil Armstrong for #halloween2021 #apollo11 pic.twitter.com/tMi7HIjkwp

Astrophycist Nathalie Ouellette dressed up as NASA's controversially-named James Webb telescope. She should be intimately familiar with the design, since she's the Canadian Science Communicator for the telescope.

Our rating: 18 hexagonal mirror tiles out of 18.

Let no one ever say I am not dedicated to @NASAWebb. Happy #Halloween everyone! 🎃✨ #JWST @csa_asc pic.twitter.com/EmneAcFYNF

This particular, three-dimensional costume may not be the most true-to-life, but it's a valiant effort. Extra points for including both SpaceX and NASA's logos.

@elonmusk
I don't suppose you have room for a 4 year old?! He has his own kit! @SpaceX
@Space_Station
@NASA
#halloweencostume #Astronaut #dreambig #NASAcostume pic.twitter.com/SfjYYvYTVc

Here's another take on the SpaceX space tourist concept, in the form of adorable children's overalls.

Our rating? Three out of four crew capsules.

"Few have come before, and many are about to follow. The door's open now and its pretty incredible."- Rook

Our kiddos wanted to be their favorite astronauts for Halloween! @rookisaacman, @ArceneauxHayley thank you for being a huge inspiration! @inspiration4x @elonmusk @SpaceX pic.twitter.com/Icjxacap3M

And let's not forget about the astronauts on board the International Space Station, who have brought their own costumes along for the ride over the last two decades.

They're not eligible for a rating, of course — they have the unfair advantage of actually being in space.

In the past our astronauts have celebrated Halloween by dressing up. They have worn all sorts of costumes to space: from superheroes to pirates to their fellow crew members, the sky's the limit!

What are you dressing up as for Halloween? pic.twitter.com/vOdFS6M4D3