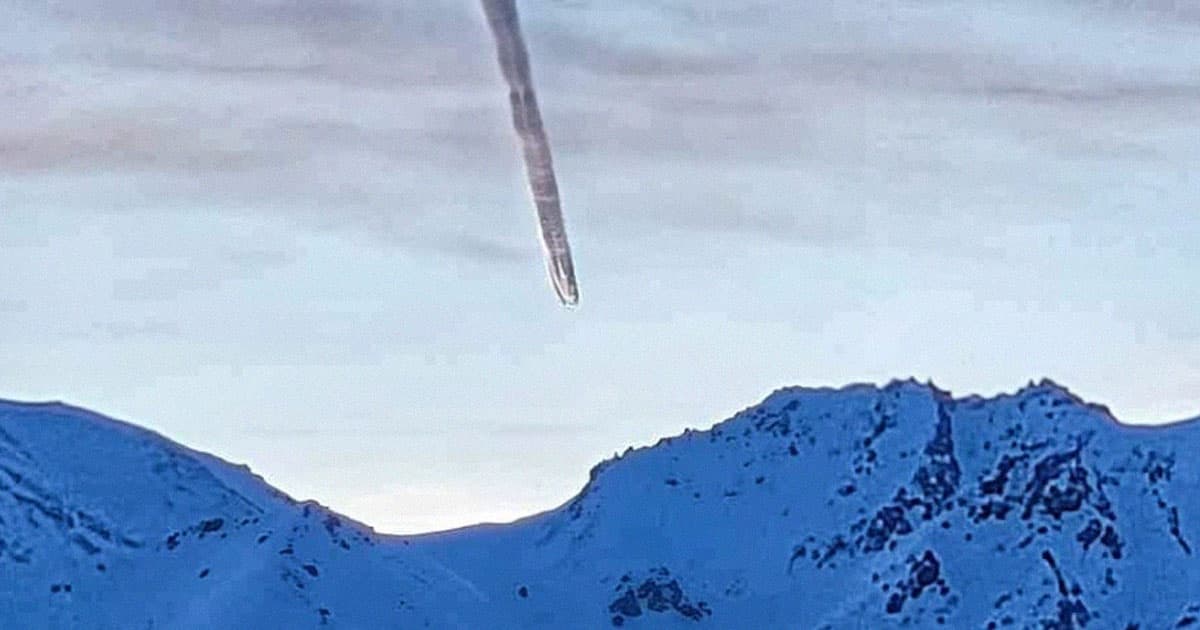 Locals Spotted Something Bizarre in the Sky Over Alaska Mountain

At least, that's the official explanation from Alaska's Department of Public Safety in response to photos of what appears to be a bizarre conic cloud formation over Palmer, AK's Lazy Mountain that caused fears of Russian or even extraterrestrial invasion.

The photos of the weird worm-like thing posted to the a local Facebook group are, indeed, quite strange. According to the woman who posted them, they were taken around sunrise over a period of about 45 seconds — and according to users in the comments, it's gotten Alaskans pretty freaked out.

"You can clearly see the object making the fumes in these photos. That ain't no rocket or plane," one user wrote. "Unless of course it was a plane that broke apart in a free fall.... but hopefully that[']s not the case."

While photos of the strange phenomenon made their way onto right wing and conspiracy websites and fueled speculation that the strange apparition could be Russian, Chinese, or extraterrestrial in origin — or even a harbinger of "Biden’s winter of death," whatever that means — the Alaska DPS had a perfectly plausible explanation.

"Further investigation revealed that a large commercial jet was flying in that area around the time that the photos and video were taken," the Alaska DPS said in its statement, adding that "troopers believe that the photos and videos showed a contrail from the commercial jet combined with the rising sun which together caused the unique atmospheric sight."

While this explanation certainly won't satisfy those convinced the likely contrail is actually a "chemtrail" or CCP rocket come to bring the next pandemic to North America, there's certainly been lots and lots of weird clouds captured on camera over the years.

Alaska DPS said they didn't find anything on the wonderfully-named Lazy Mountain, so for now, we'll have to take their explanation at face value — unless you, like Agent Fox Mulder, simply want to believe that it's something weirder than the bizarro physics of clouds.

Rising Clouds Could Spell Disaster for the World's Tropical Forests
1. 13. 18
Read More
Changing Airplane Flight Paths Could Help Reduce Pollution
3. 15. 17
Read More
Choked Out
Entire Island Strangled by Choking Vines
Yesterday
Read More
+Social+Newsletter
TopicsAbout UsContact Us
Copyright ©, Camden Media Inc All Rights Reserved. See our User Agreement, Privacy Policy and Data Use Policy. The material on this site may not be reproduced, distributed, transmitted, cached or otherwise used, except with prior written permission of Futurism. Articles may contain affiliate links which enable us to share in the revenue of any purchases made.
Fonts by Typekit and Monotype.