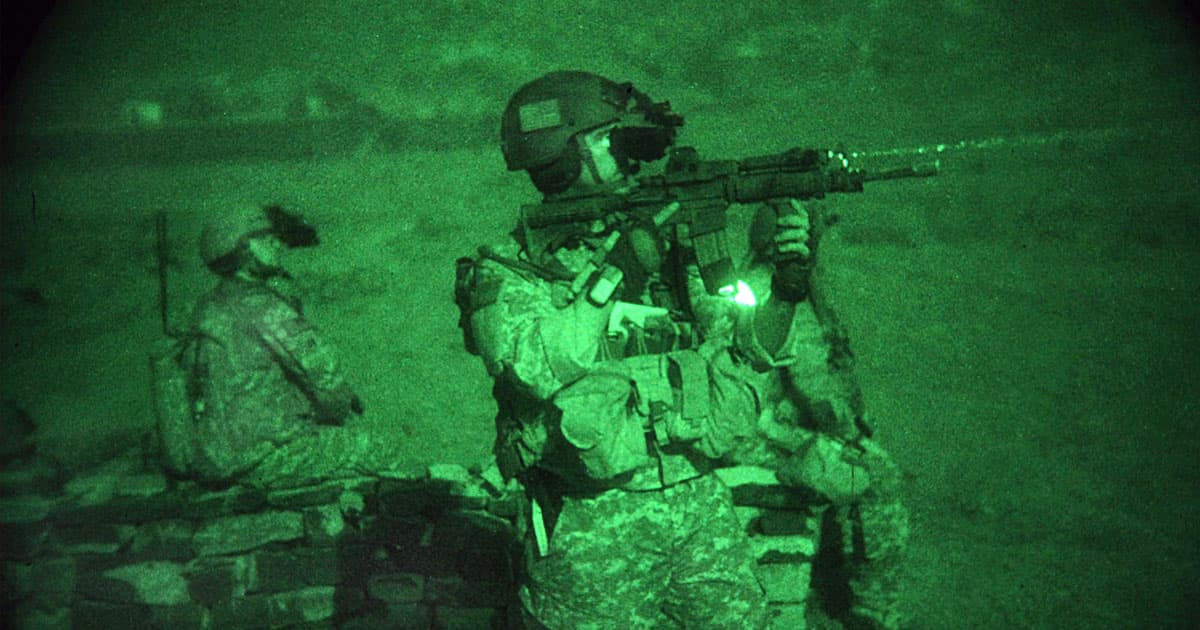 They'd be able to see in the dark without relying on bulky goggles.

They'd be able to see in the dark without relying on bulky goggles.

In February, a team of scientists from China and the U.S. reported that they'd given mice the ability to see in the dark by injecting nanoparticles into the animals' eyeballs.

At the time, researcher Xue Tian said he "definitely" thought the same technique would work in humans — and now, one scientist has come out to explain why the first people to undergo the procedure might be soldiers in the U.S. military.

In their study, which was published in the journal Cell, the international team of researchers noted that their night-vision technology could have military applications. And earlier this month, Arizona State University engineering professor Braden Allenby expanded on that potential in an interview with Stars and Stripes.

According to Allenby, soldiers might want to opt for the procedure because it would let them see in the dark without relying on bulky goggles. He also posited that the technique could prove preferable to genetic engineering options for instilling soldiers with night vision given that it's temporary, lasting for about 10 weeks in mice.

Temporary or not, though, Allenby still thinks soldiers will need to hold onto their night vision goggles for at least a little while longer.

“It will be a while before warriors are getting this treatment," he told Stars and Stripes, "because there needs to be a lot of work to make sure it is safe for deployment, and works as advertised, with humans in the field."

READ MORE: Troops of the future may ditch night-vision goggles in favor of eye injections to see in the dark [Stars and Stripes]

Deadly Thoughts
The Pentagon Wants to Control Drones With Soldiers' Brain Waves
10. 16. 19
Read More
The Pentagon Tells Soldiers To Stop Sharing Their Locations With Apps
8. 8. 18
Read More
Military Funding For Prosthetics Helps More Than Just Soldiers
6. 12. 17
Read More
+Social+Newsletter
TopicsAbout UsContact Us
Copyright ©, Camden Media Inc All Rights Reserved. See our User Agreement, Privacy Policy and Data Use Policy. The material on this site may not be reproduced, distributed, transmitted, cached or otherwise used, except with prior written permission of Futurism. Fonts by Typekit and Monotype.