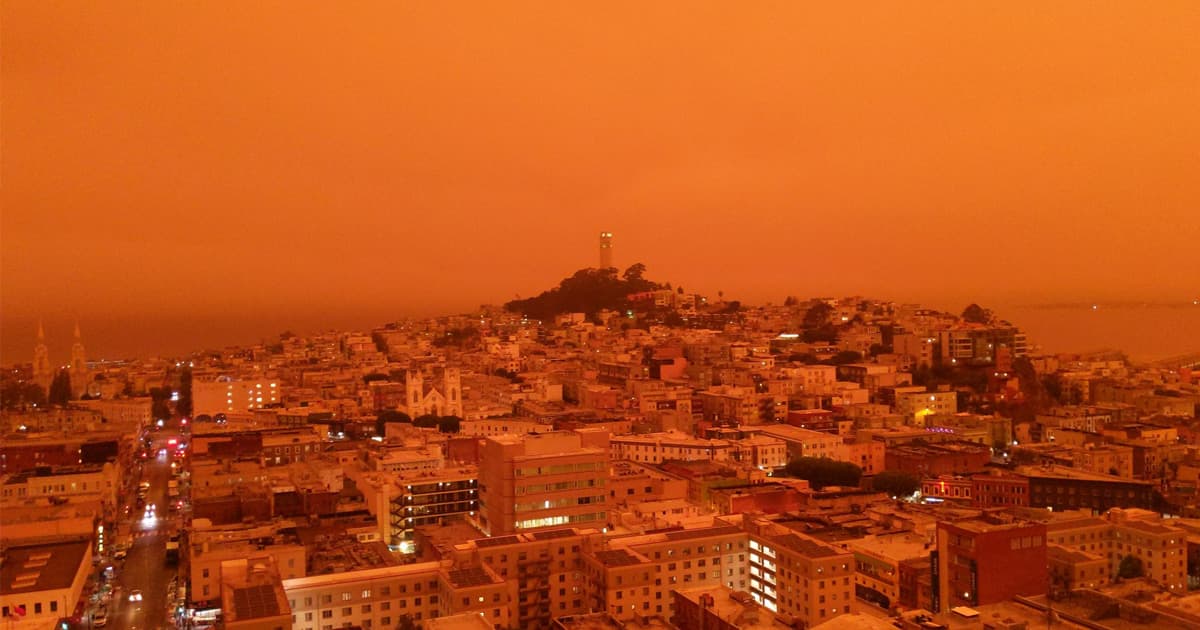 Here's Why Smartphones Are Struggling to Take Pics of Apocalyptic Skies

Smartphones are deciding what looks "real" — and what doesn't.

Smartphones are deciding what looks "real" — and what doesn't.

Smartphone cameras are having an unusually difficult time capturing the apocalyptic orange skies hanging over much of the West Coast right now.

Massive clouds of smoke, caused by dozens of uncontrolled wildfires, have turned major cities across California and Oregon into something resembling a Martian landscape.

But onlookers found their smartphones were struggling to capture the unusual, vivid shade of orange. The result: most photographs ended up being washed out or turned the orange sky grey.

Our phones can’t even believe how orange the sky is this morning https://t.co/2pmULLy5tZ

That's mainly due to automatic color correction built into the default camera apps preloaded onto most smartphones, according to Axios. The software controlling the cameras is desperately attempting to correct hues and exposure to resemble more normal-looking sky.

In other words, the smartphone expects a blue, overcast, or night sky — not an orange hellscape straight out of "Mad Max."

It's easy to forget: some handsets, especially iPhones and Google's Pixel phones, are doing a lot of heavy computational lifting when you take shots.

That's why, to get an accurate picture of California's orange skies, color correction must be manually overriden, as CNET explains. Third-party apps such as Halide or Adobe's Lightroom will get you far more accurate results right off the bat thanks to more manual controls.

"If you want a more realistic orange photo, try putting something in the frame the AI recognizes the 'normal' color of — like a human being," advised Washington Post tech columnist Geoffrey Fowler on Twitter.

Turning off auto white balance in the main camera app will also get you far better results. Try setting it to "daylight" rather than having the app try to estimate it itself.

Yes, AWB has been around for a while. But the choices phones make today are more extreme. Here’s the same view from a Canon 5D Mark III on P and AWB vs. an iPhone 11 Pro. pic.twitter.com/AyG5PlGcPT

More on the orange skies: The Skies in California Basically Look Like the Apocalypse Right Now

Brands We Love
This Simple Attachment Turns Your Phone Into A High-Tech Thermal Camera
5. 29. 21
Read More
From Our Partners
Keep Annoying Calls Away With A 2-Year Subscription To This Spam-Call Blocker
5. 14. 21
Read More
Not a Good Look
After Tesla Defied Lockdown, Workers Started Catching Coronavirus
6. 9. 20
Read More
+Social+Newsletter
TopicsAbout UsContact Us
Copyright ©, Camden Media Inc All Rights Reserved. See our User Agreement, Privacy Policy and Data Use Policy. The material on this site may not be reproduced, distributed, transmitted, cached or otherwise used, except with prior written permission of Futurism. Articles may contain affiliate links which enable us to share in the revenue of any purchases made.
Fonts by Typekit and Monotype.