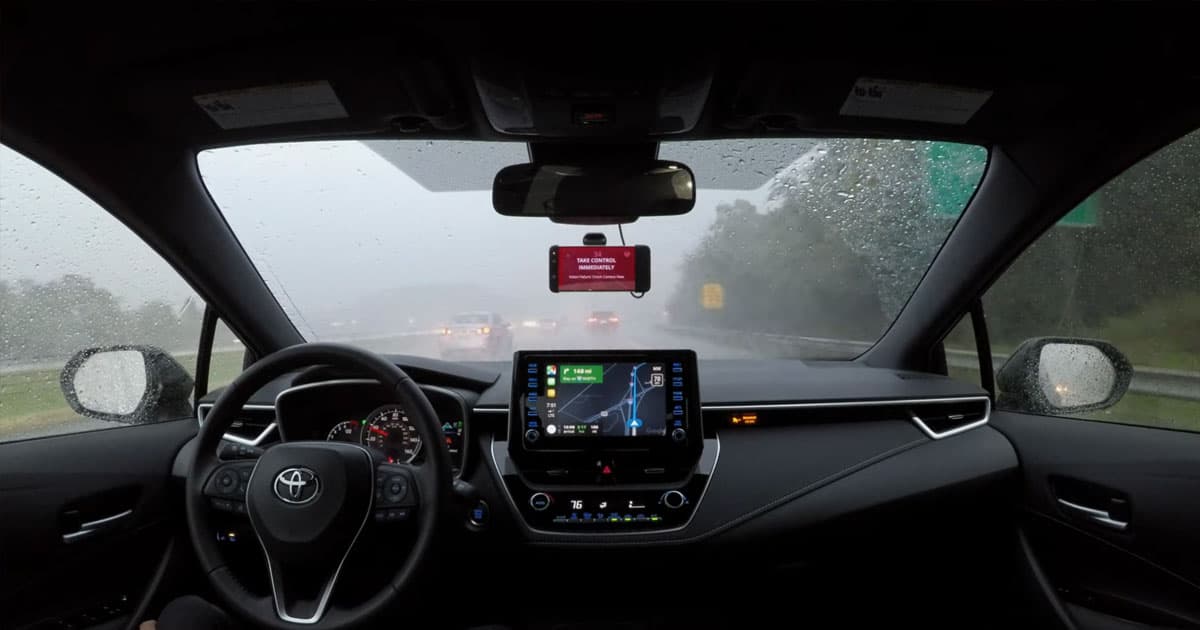 Watch a Self-Driving Car Deftly Zoom Through a Heavy Rainstorm

This open-source self-driving software can turn almost any car into a cutting edge — albeit illegal — self-driving vehicle.

This open-source self-driving software can turn almost any car into a cutting edge — albeit illegal — self-driving vehicle.

Hitting bad weather on a highway is stressful and dangerous, with high speed winds, reduced visibility and the risk of hydroplaning. But a new video shows that self-driving car tech is making impressive strides in dealing with stormy conditions.

The smart vehicle also spots a slowing car in front of it with plenty of time to spare, alerting LeGrand with a bright red message that reads "take control immediately." Despite the warning, the driver barely has to touch the steering wheel as the car handles the situation itself.

The brains behind the impressive demonstration come courtesy of Comma.ai, an AI startup founded by storied hacker George Hotz. The company's Openpilot software is able to override the conventional self-driving assistance features of current-generation cars.

The first iteration of the software was packed into a complete $999 package called the Comma One, which was announced at a tech event in 2015. Unfortunately, the National Highway Traffic Safety Administration immediately took issue with the system, forcing Hotz to shut down the startup's project.

But that wasn't the end of it. In November 2016, Comma.ai open-sourced the project, warning users they were on their own if anything went badly.

Since then, it's been kept alive by self-driving car enthusiasts, with the startup claiming in May that it hit 10 million miles driven on Openpilot.

READ MORE: OpenPilot - Self Driving In A Rainstorm [YouTube]

More on self-driving cars: Self-Driving Racecars Are Edging Up Toward Human Records

Elon Take the Wheel
Tesla's In-Car Cameras Are Now Spying on Drivers to Make Sure They Pay Attention
6. 1. 21
Read More
Look Ma
It's Shockingly Easy to Drive a Tesla Without Anybody in the Driver's Seat
4. 22. 21
Read More
Drifting DeLorean
Watch a Self-Driving DeLorean Burn Rubber on a Stunt Course
12. 23. 19
Read More
+Social+Newsletter
TopicsAbout UsContact Us
Copyright ©, Camden Media Inc All Rights Reserved. See our User Agreement, Privacy Policy and Data Use Policy. The material on this site may not be reproduced, distributed, transmitted, cached or otherwise used, except with prior written permission of Futurism. Articles may contain affiliate links which enable us to share in the revenue of any purchases made.
Fonts by Typekit and Monotype.