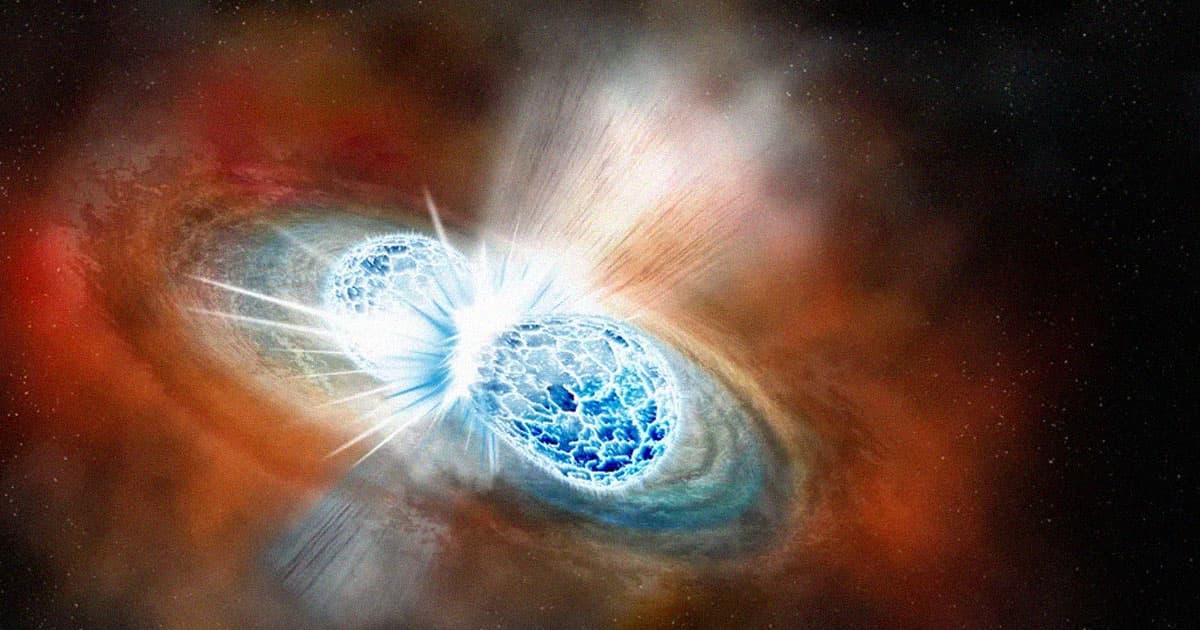 That can't be right.

That can't be right.

Back in 2017, scientists observed a spectacular collision of two neutron stars that blasted a jet of radiation so powerful that NASA says the energy it released was "comparable to that of a supernova," according to a press release by the agency.

But it's taken scientists until now to unpack all the data that was gathered because of its complexity. Among other intriguing findings: stuff appearing to travel faster than light — which, of course, is impossible. But don't worry. There's a perfectly reasonable explanation.

The event, designated GW170817, is what's known as a binary neutron star merger. Neutron stars are the collapsed cores of once-massive stars and some of the densest objects in the universe. According to NASA, just a single teaspoon of one would weigh four billion tons on Earth.

With that sort of unfathomable density comes great gravity — enough to draw two of these neutron stars together in an explosive collision that launched gravitational waves and gamma radiation into space, making it the first time scientists have detected both from a neutron star merger, NASA says.

The Hubble Space Telescope observed the two neutron stars collapse into a black hole in the aftermath of the explosion. A spinning disk then formed around the black hole, which beamed incredibly fast jets of matter into space. Combining their findings with that of the National Science Foundation, scientists were able to piece together the event with extreme precision — including how fast the jets were moving.

Initially, from the Hubble observations, it appeared the jets were traveling at seven times the speed of light. Of course, that's impossible. The scientists attribute this discrepancy to a phenomena known as superliminal motion. Essentially, since the jet approaches our planet at nearly the speed of light, NASA says, the light it emits at later points has a shorter distance to travel each time, making it seem like it's moving faster than it really is.

With some additional calculations, scientists found the real speed: at least 99.97 percent the speed of light — which, to be fair, is still pretty damn fast.

The scientists hope their findings, published in a paper this week in Nature, will allow for even more precise observations of neutron star mergers in the future, which could potentially help calculate the rate of the universe's expansion.

Sun Screen
The James Webb Space Telescope Is Officially Unfurling Its Mighty Sunshield
Jan 1
Read More
Mad Libs
A Philosopher Is Trying to Figure out What Black Holes Really Are
2. 15. 19
Read More
The Great Evil
A Jupiter-Sized Black Hole is Floating Around The Milky Way
1. 17. 19
Read More
+Social+Newsletter
TopicsAbout UsContact Us
Copyright ©, Camden Media Inc All Rights Reserved. See our User Agreement, Privacy Policy and Data Use Policy. The material on this site may not be reproduced, distributed, transmitted, cached or otherwise used, except with prior written permission of Futurism. Articles may contain affiliate links which enable us to share in the revenue of any purchases made.
Fonts by Typekit and Monotype.