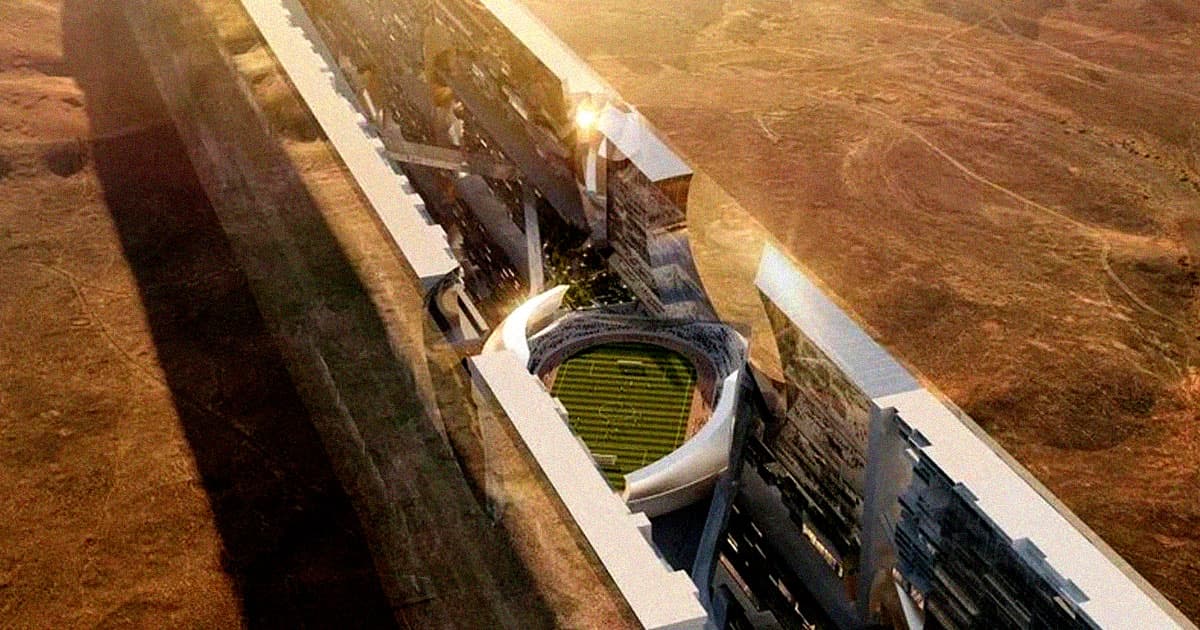 If it ever gets completed.

If it ever gets completed.

Saudi Arabia has broken ground on its gigantic and controversial 100-mile skyscraper city, called The Line. And judging by the astronomical scale of the operation, it's bound to be either one of the greatest feats of modern-day engineering — or a monumental, half-trillion-dollar failure.

The scale is immense. The Line is designed to house up to nine million residents, CNBC reports, inside a two parallel skyscrapers some 1,640 feet high and 650 feet across. The whole development, the oil-rich country says, will run entirely on renewable energy.

Plenty of experts have voiced their criticism since then, with architects calling it "dystopian" pipe dream. In fact, the project is already shrouded in controversy, with watchdogs already reporting of human rights abuses during the first days of its construction.

The Line is one of three mammoth projects — the overarching Neom development area will also include a mountainous travel destination for outdoor sports enthusiasts called Trojena, and a massive floating industrial complex called Oxagon.

In short, the scale is reminiscent of other monumental construction projects, like Egypt's pyramids — that is, if it will ever be completed.

"I want to be clear about this — Neom is a complex, bold, and highly ambitious undertaking and is most certainly not an easy one to deliver," Antoni Vives, chief urban planning officer at Neom, told CNBC. "But we are making strong progress, and it’s exciting to see the vision come to life."

Given Saudi Arabia's less-than-stellar human rights record, the construction of Neom will almost certainly come at a humanitarian cost. In March, the kingdom executed 81 men, the biggest mass execution in decades, according to CNN.

Human Rights Watch is also warning that migrant workers, who will undoubtedly work on the project, will be entirely at the mercy of their employers, and operating outside of labor laws.

Meanwhile, foreign architecture firm executives are being offered million-dollar salaries to work on the project.

Construction has only just begun, but given what's at stake, there's a chance Saudi Arabia's giga project won't end up being a monument to modern society — but a memorial, instead.

Clean House First
Saudi Arabia Is Building a Zero-Carbon City in a 100-Mile Straight Line
1. 12. 21
Read More
Pizza Personnel
Domino's Buying Hundreds and Hundreds of Electric Delivery Vehicles
Wednesday
Read More
Another One
Coinbase May Be in Real Serious Trouble Now
Wednesday
Read More
+Social+Newsletter
TopicsAbout UsContact Us
Copyright ©, Camden Media Inc All Rights Reserved. See our User Agreement, Privacy Policy and Data Use Policy. The material on this site may not be reproduced, distributed, transmitted, cached or otherwise used, except with prior written permission of Futurism. Articles may contain affiliate links which enable us to share in the revenue of any purchases made.
Fonts by Typekit and Monotype.