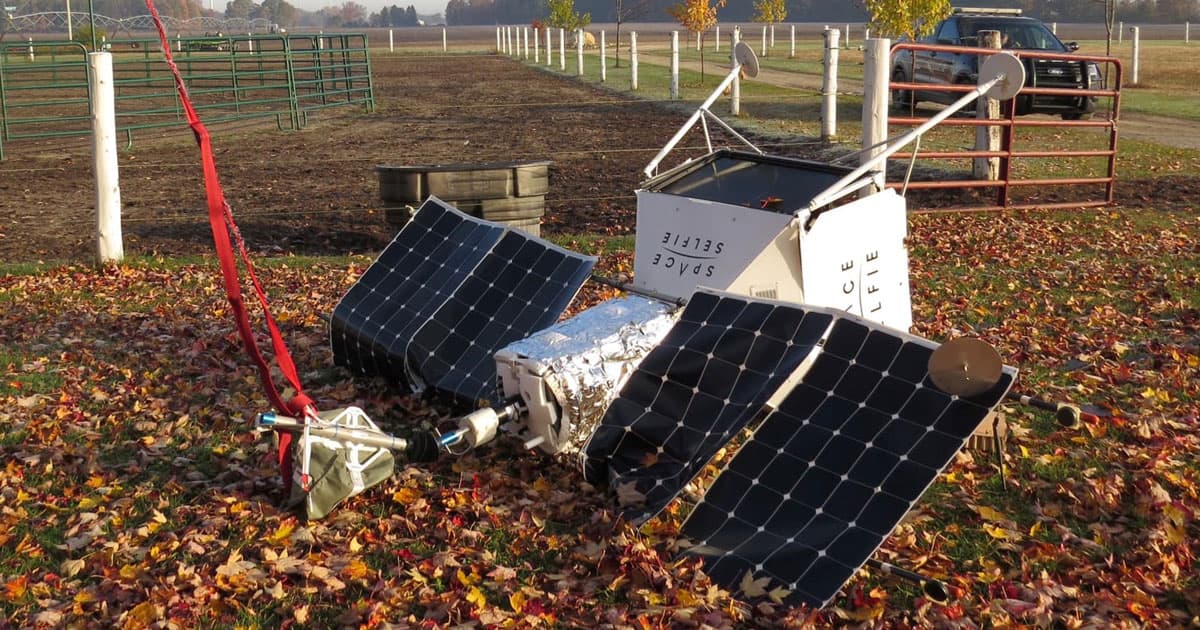 A Samsung Satellite Just Crashed Into a Michigan Farm

Samsung launched an unusual satellite weeks ago, featuring a Galaxy S10 smartphone tethered to a gigantic balloon. But its journey was cut short when the satellite came crashing down to Earth, NBC reports, crashing onto a Michigan farm.

The satellite was meant to allow you to take a “SpaceSelfie” — a questionable PR stunt where your selfies get sent to space, are photographed while being displayed on the S10 in space, and are then sent back down to Earth.

Strangely, the crash was all part of Samsung’s plan — sort of.

“Samsung Europe’s SpaceSelfie came back down to Earth,” read a Samsung statement received by NBC. “During this planned descent of the balloon to land in the US, weather conditions resulted in an early soft landing in a selected rural area.”

Samsung agents were immediately flown out to the farm to make sure nobody got hurt — and retrieve their balloon and satellite.

The farmer whose backyard was desecrated by the odd payload took a video, showing a heap of metal covered in Samsung logos. Yep, definitely belongs to Samsung.

“You never know what’s gonna happen,” property owner Nancy Welke can be heard saying in the video obtained by NBC.

Luckily no animals were hurt.

More on satellite crashes: A Derelict Space Habitat May Crash Into an Old Russian Satellite

Brands We Love
Here’s What You Need to Know About the Samsung Galaxy S20 Series Pre Order
2. 21. 20
Read More
When Governments Cook The GDP Books, Satellite Images Can Keep Them In Check
5. 16. 18
Read More
Samsung’s Mining Rig Lets You Collect Cryptocurrency Using 40 Old Galaxy Smartphones
10. 29. 17
Read More
+Social+Newsletter
TopicsAbout UsContact Us
Copyright ©, Camden Media Inc All Rights Reserved. See our User Agreement, Privacy Policy and Data Use Policy. The material on this site may not be reproduced, distributed, transmitted, cached or otherwise used, except with prior written permission of Futurism. Fonts by Typekit and Monotype.