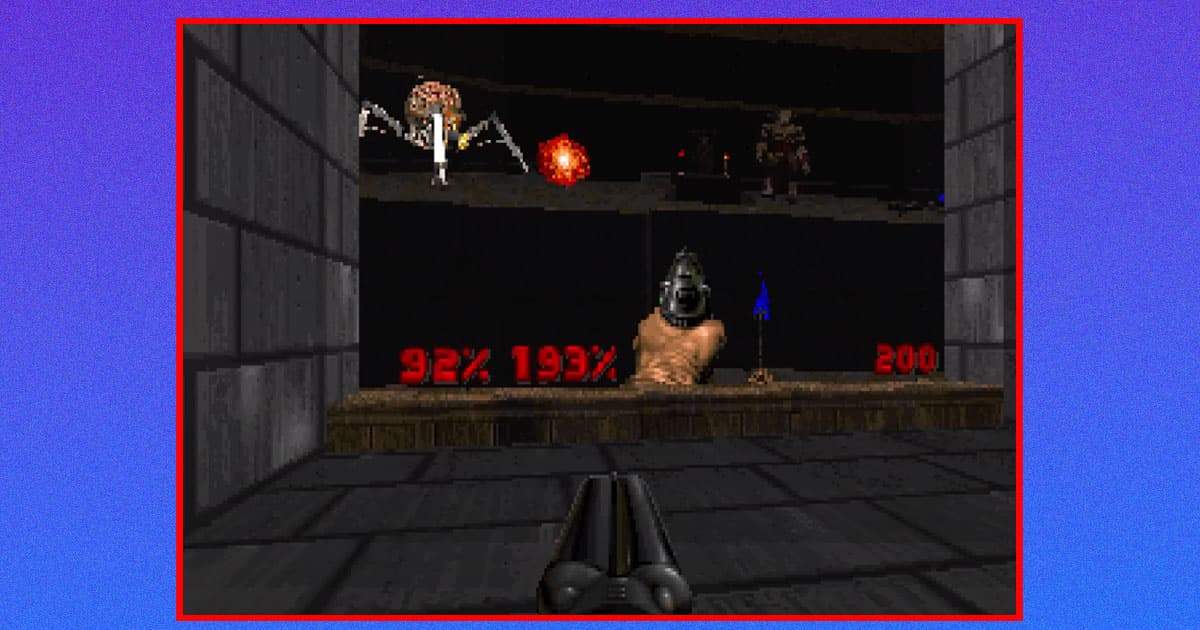 Rejoice, Gamers! You Can Now Run DOOM Inside DOOM

The port to end all ports: pack it in, boys, because someone managed to run DOOM on DOOM.

Tinkering with id Software’s iconic 1993 first person shooter has been an internet tradition for decades. Back in the day, DOOM was a revelation for not only the shooter genre when it was released, but for gaming as a whole.

But that was nearly 30 years ago. Now, fans of the game like to amuse themselves by finding different — and often absurd — platforms to port the game to. We’re not talking about porting it to Windows 10 or a random video game console. No, that’s small potatoes. We’re talking fridges, calculators, ATMs, pregnancy tests, and even — DOOM itself?

After discovering an exploit that would allow them to execute their own code within the original DOOM II, a pioneering programmer known as "kqsws" — with some finagling —  used it to import Chocolate DOOM, a modern port of the original game. Their work didn’t end there, though.

With greater ambitions in mind, they created an entire map resembling a movie theater multiplex, displaying explanations on their work and posters advertising their other projects. But most importantly, they built a 128 pixel tall screen that flawlessly runs Chocolate DOOM, which you can take control of by pressing F12. And it even runs Heretic, another game based on the DOOM engine. Incredible.

Check out this video for a more in depth demonstration, where they also go over some bonus exploits they found. While someone did accomplish a similar feat before them back in 2015, that was running code on the modern GZDoom port, not the original game.

What gamers manage to accomplish in their favorite games is no joke. Maybe next they'll get DOOM to run inside an instance of DOOM that's being run inside DOOM.

Russian Block
Teen Sentenced to Prison for Plotting Terror Attack in Minecraft
Feb 11
Read More
Delete Twitter
Elon Musk Has Some Strong Opinions About Cyberpunk 2077
12. 14. 20
Read More
Brands We Love
Gamefly Gives You Access to Thousands of Video Game Titles for One Flat Fee
8. 3. 20
Read More
+Social+Newsletter
TopicsAbout UsContact Us
Copyright ©, Camden Media Inc All Rights Reserved. See our User Agreement, Privacy Policy and Data Use Policy. The material on this site may not be reproduced, distributed, transmitted, cached or otherwise used, except with prior written permission of Futurism. Articles may contain affiliate links which enable us to share in the revenue of any purchases made.
Fonts by Typekit and Monotype.