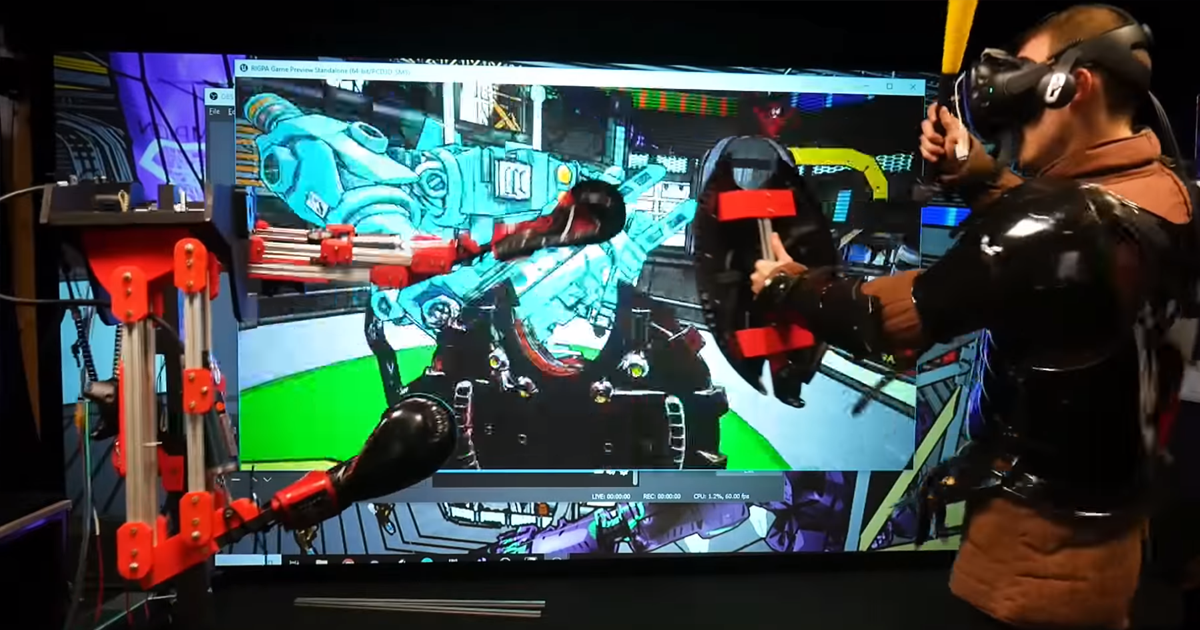 This Robot Bludgeons You With Boxing Gloves While You Play Games

When you're plugged into a good virtual reality experience, you might talk about how it "feels real."

That's apparently not good enough for engineer James Bruton, who built a robot to punch him while he brawls with a virtual automaton in a VR game. The setup isn't commercially available — the game and robot were custom made, The Verge reports, but it represents an impressive attempt to bring virtual reality to life.

Bruton's life-sized Rock 'Em Sock 'Em robot, which was built in collaboration with students from the University of Portsmouth, wheels around the room while jabbing at Bruton in time with the virtual robot in his VR headset.

Meanwhile, motion trackers in the room monitor of how Bruton moves his arms, equipped with sword and shield, to deflect the robotic punches and fight back.

Without being able to test the system, it's unclear whether getting punched by a real robot would ramp up the feeling of immersion or ruin the experience, but what is clear is that I really want to give it a try.

READ MORE: This robot hits you in real life when you get hit in VR [The Verge]

More on VR: I Tried a VR App Meant to Replace Offices, and It Was Glorious

FROM THE DEPT. OF THINGS TO BUY
Best Gaming Keyboards of 2022
Mar 23
Read More
FROM THE DEPT. OF THINGS TO BUY
Best Space Games of 2022
Mar 9
Read More
TV for Your Face
Elon Musk Says the Metaverse Sucks and Neuralink Will Be Better
12. 22. 21
Read More
+Social+Newsletter
TopicsAbout UsContact Us
Copyright ©, Camden Media Inc All Rights Reserved. See our User Agreement, Privacy Policy and Data Use Policy. The material on this site may not be reproduced, distributed, transmitted, cached or otherwise used, except with prior written permission of Futurism. Fonts by Typekit and Monotype.