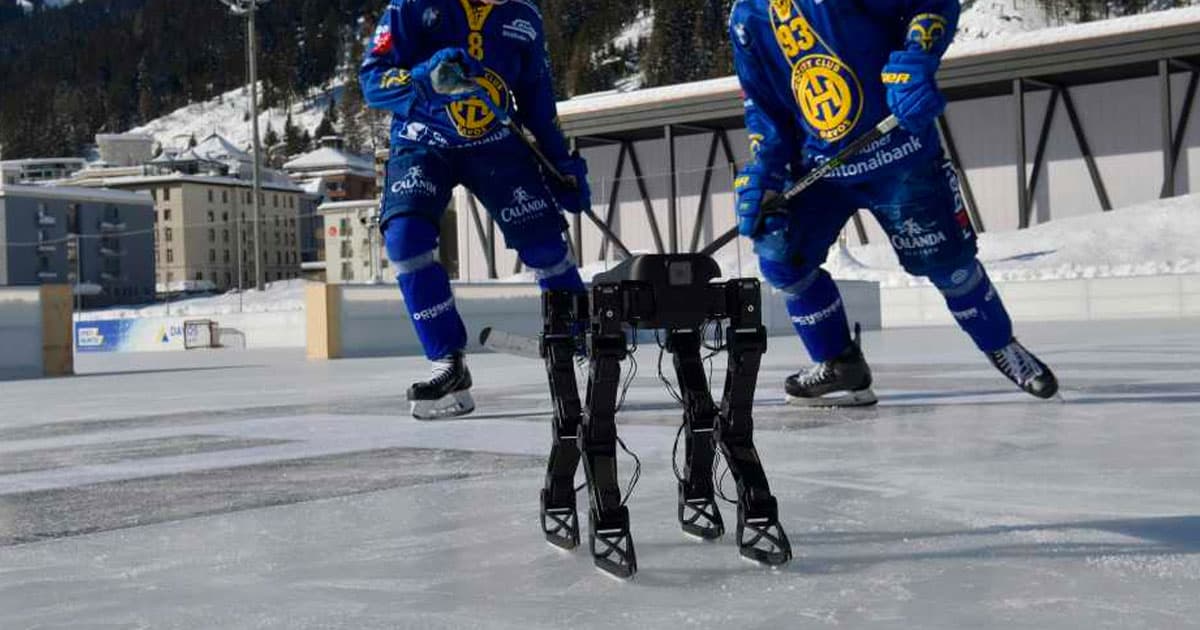 "The only thing we tell it is how one ice skate behaves on ice."

"The only thing we tell it is how one ice skate behaves on ice."

It's a skill not even every human possesses: skating on ice.

But a Swiss robot dubbed "Skaterbot" managed to learn. The maverick quadruped belongs to Stelian Coros, a professor at ETH Zurich's Computational Robotics Lab. Skaterbot was shown off at a local ice skating rink during last month's World Ecosnomic Forum in Davos, Switzerland.

An official video shows Skaterbot competing with players from the local hockey club.

Coros told the robot how skates behave on ice, then let it learn its own skating technique.

"The only thing we tell it is how one ice skate behaves on ice," Coros told BBC's Click. "In particular, the fact that it's free to move in the direction of the blade, and it has high-friction forces in a direction that's orthogonal [at a right angle] to it."

Skaterbot can even do tricks, like learn how to skate with more than four legs.

The team envisions the robot to be useful during search and rescue missions, and could even be used for deliveries. But for now, Skaterbot still has a lot to learn.

"Considering that these are our first baby steps on ice, I think that our robot did quite well," Coros told ETH Zurich.

READ MORE: The robot that learned how to skate on ice [BBC]

More on fun robots: Thanks to AI, MIT's New Robot Could Beat You at Jenga

Thanks, but No Thanks
Oakland Police Want to Arm Robots With Shotguns, Because We Live in a Dystopian Nightmare
10. 17. 22
Read More
Unholy Diver
Terrifying Humanoid Diving Robot With "Human" Sense of Touch Explores Shipwreck
8. 1. 22
Read More
Diner Drama
People Furious at Robot Serving Pancakes at Denny's
11. 28. 21
Read More
+Social+Newsletter
TopicsAbout UsContact Us
Copyright ©, Camden Media Inc All Rights Reserved. See our User Agreement, Privacy Policy and Data Use Policy. The material on this site may not be reproduced, distributed, transmitted, cached or otherwise used, except with prior written permission of Futurism. Articles may contain affiliate links which enable us to share in the revenue of any purchases made.
Fonts by Typekit and Monotype.