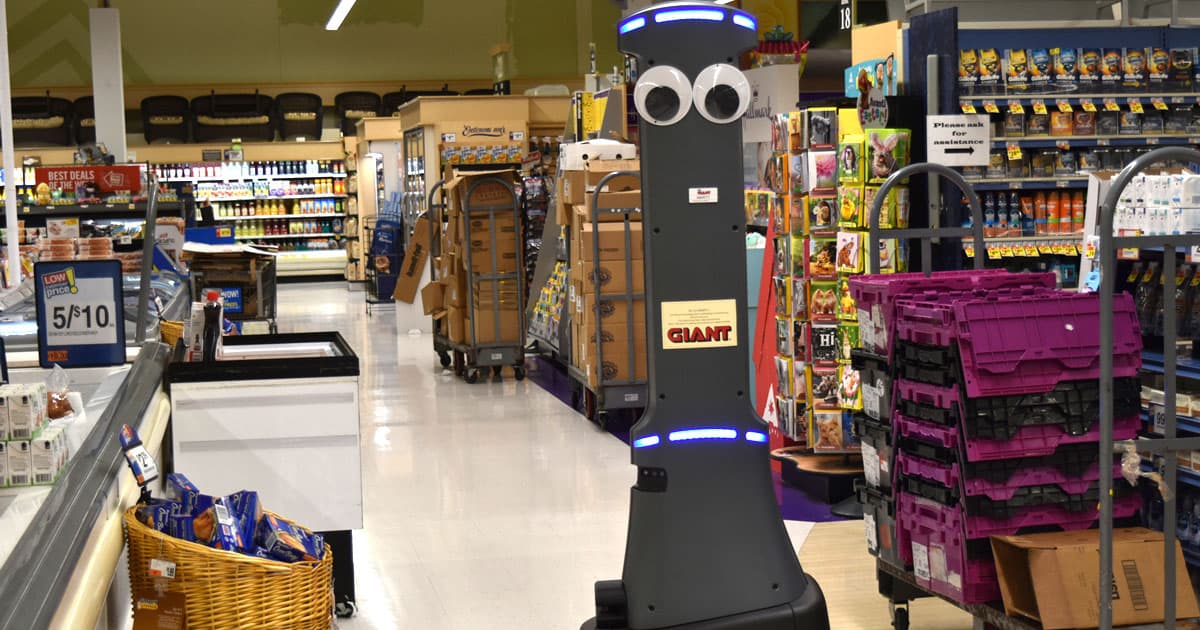 Marty is ready to spot spills in 172 stores.

Marty is ready to spot spills in 172 stores.

Don't let the googly-eyes fool you — Marty is one smart machine.

The tall, gray robot can autonomously navigate the floor of a grocery store, using cameras and sensors to identify and report hazards such as spills and debris.

After a successful pilot program this fall, grocery chain Giant Food Stores is now ready to deploy a fleet of 500 Marty robots — yet another sign that robots are the future of retail.

On Monday, Giant announced plans to place Marty robot assistants in all 172 of its locations throughout Pennsylvania, Maryland, Virginia, and West Virginia.

The goal is to have a total of 500 robots fully deployed within six months, with the rollout taking place in waves.

According to Tim Rowland, CEO of Badger Technologies, the company that created Marty, this will be "one of the largest — if not the largest — rollout of autonomous robots in the grocery retail industry."

While Marty is programmed to looks for hazards, other retailers have deployed autonomous bots that clean floors, track inventory, and assist customers.

These robots have a number of obvious benefits over their human counterparts — they're consistent, work without pay, and never needs breaks or time off. Customers seem to like them, too, according to Patrick Maturo, manager of store optimization at Giant's parent company, Ahold USA.

“[T]here’s a large majority of people that are very excited to see a robot in the store," he told PennLive. "They tend to take pictures of it, video of it, and selfies with the robot. It’s very cool."

Cool for customers, maybe. But retailer workers? Possibly not so much.

While Giant notes in a press release that "[Marty's] efforts free up associates to spend more time serving with customers," given all the benefits of these bots, it's not hard to imagine a future in which robot assistants like Marty go one step further: freeing associates of their jobs altogether.

More on retail robots: Walmart Is About to Deploy Hundreds of Robot Janitors

No Scrubs
This Grouchy Employee Hates Walmart's New Floor-Scrubbing Robots
4. 12. 19
Read More
Dirty Work
Walmart Is About to Deploy Hundreds of Robot Janitors
12. 3. 18
Read More
Cow Chow
Bill Gates Gives $12 Million to Flatulent Australian Cows
Yesterday
Read More
+Social+Newsletter
TopicsAbout UsContact Us
Copyright ©, Camden Media Inc All Rights Reserved. See our User Agreement, Privacy Policy and Data Use Policy. The material on this site may not be reproduced, distributed, transmitted, cached or otherwise used, except with prior written permission of Futurism. Articles may contain affiliate links which enable us to share in the revenue of any purchases made.
Fonts by Typekit and Monotype.