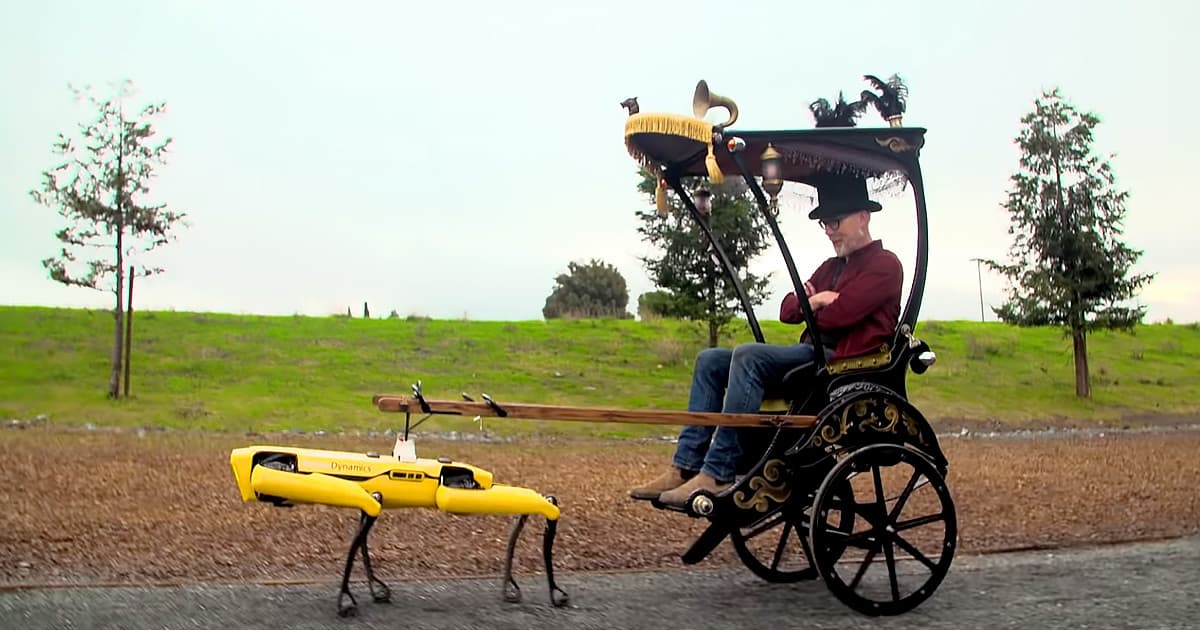 Watch a Robodog Drag Adam Savage Around in a Goth Rickshaw

Former "Mythbusters" co-host and YouTube tinkerer Adam Savage has built a one-person rickshaw carriage so that his Boston Dynamics Spot robot can lug him around.

Let's hope this demeaning stunt won't lead to an uprising of the machines.

Savage hand-built the odd-looking rickshaw contraption over five days in his workshop — a design he characterized as "steampunk, Victorian, funereal."

American engineering firm Boston Dynamics officially put its famous Spot robot on sale in September — and they're already being put to good use. Earlier this week, oil producer Aker BP announced that an AI software company will test Spot out on a Norwegian oil rig. Even the Massachusetts Police Force is reportedly experimenting with some Spot robots.

In the video, Savage builds an interface to allow Spot to pull the carriage with the help of two engineers.

Thanks to the two giant cartwheels carrying most of Savage's weight, the robot had a surprisingly easy time pulling the inventor down a gravel path — but only after some software tweaking on a laptop to compensate for the added heft and upward slope.

READ MORE: Adam Savage Found the Perfect Reason To Spend Tens of Thousands of Dollars on a Robotic Dog [Gizmodo]

Quacks Like a Duck
Watching Elon Musk's Robot Back to Back With Boston Dynamics Is... Something
Oct 4
Read More
Wait What
FCC Commissioner Says He's Afraid of Robodogs and We Can't Tell If He's Joking
10. 31. 21
Read More
Bot Crime
Experts Shocked by Military Robodog With Sniper Rifle Attachment
10. 13. 21
Read More
+Social+Newsletter
TopicsAbout UsContact Us
Copyright ©, Camden Media Inc All Rights Reserved. See our User Agreement, Privacy Policy and Data Use Policy. The material on this site may not be reproduced, distributed, transmitted, cached or otherwise used, except with prior written permission of Futurism. Articles may contain affiliate links which enable us to share in the revenue of any purchases made.
Fonts by Typekit and Monotype.