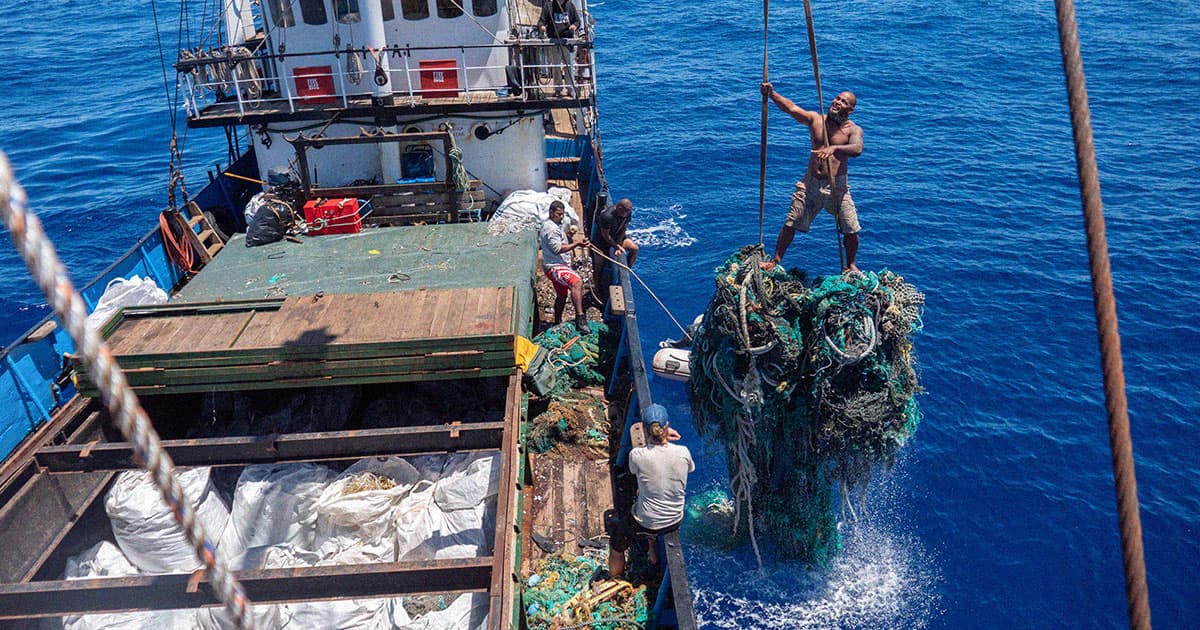 "We’ve really used the ocean as a garbage pail."

"We’ve really used the ocean as a garbage pail."

A crew on board a ship belonging to the nonprofit Ocean Voyages Institute made an unusual discovery while cleaning trash out of the Great Pacific Garbage Patch — the largest accumulation of ocean plastic in the world, and an unmistakable reminder of civilization's catastrophic environmental footprint.

And, at this point, it's become such a large problem that we don't even know what we're finding there.

Take when the crew stumbled upon a what appeared to be "mysterious plastic floating objects," as the team recalled in an interview with the San Francisco Chronicle, an apparent tongue-in-cheek reference to UFOs.

One of these objects measured 20 by six feet, barely fitting into the ship's cargo hold. According to the report, it weighed around 3.5 tons — and the team has yet to figure out what the hell it was.

"It almost looks like a fiberglass or plastic tank that came out of a fishing vessel," captain Locky MacLean told the Chronicle.

The team also captured massive webs of fishing nets, which in particular, pose a very real threat to the marine ecosystem.

In total, the Ocean Voyages Institute ended up hauling around 200,000 pounds of Garbage Patch plastic to shore. While that may sound like a lot, it only represents a drop in the ocean, if you will.

That's because the patch covers an area of over 600 million square miles, about twice the size of Texas.

And it's growing fast. Researchers estimate that between 1.15 and 2.41 million tons of plastic waste enter the ocean via rivers every year.

It's a depressing reminder of just how badly humanity has treated our planet's oceans.

"We’ve really used the ocean as a garbage pail," Mary Crowley, founder and president of the Ocean Voyages Institute, told the Chronicle, the mistreatment of a "beautiful ocean wilderness."

More on the patch: Marine Scientists Say Pulling Plastic Out of the Ocean Isn't Even Worth It

Brands We Love
Cut Plastic Waste With a LastSwab Reusable Swab
8. 2. 20
Read More
Death by Plastic
Anti-Coke Lawsuit: "Plastic Is Set to Outweigh Fish in the Ocean"
3. 2. 20
Read More
Newly-Evolved Microbes Could Be Eating 90% of Ocean Plastic
5. 30. 17
Read More
+Social+Newsletter
TopicsAbout UsContact Us
Copyright ©, Camden Media Inc All Rights Reserved. See our User Agreement, Privacy Policy and Data Use Policy. The material on this site may not be reproduced, distributed, transmitted, cached or otherwise used, except with prior written permission of Futurism. Fonts by Typekit and Monotype.