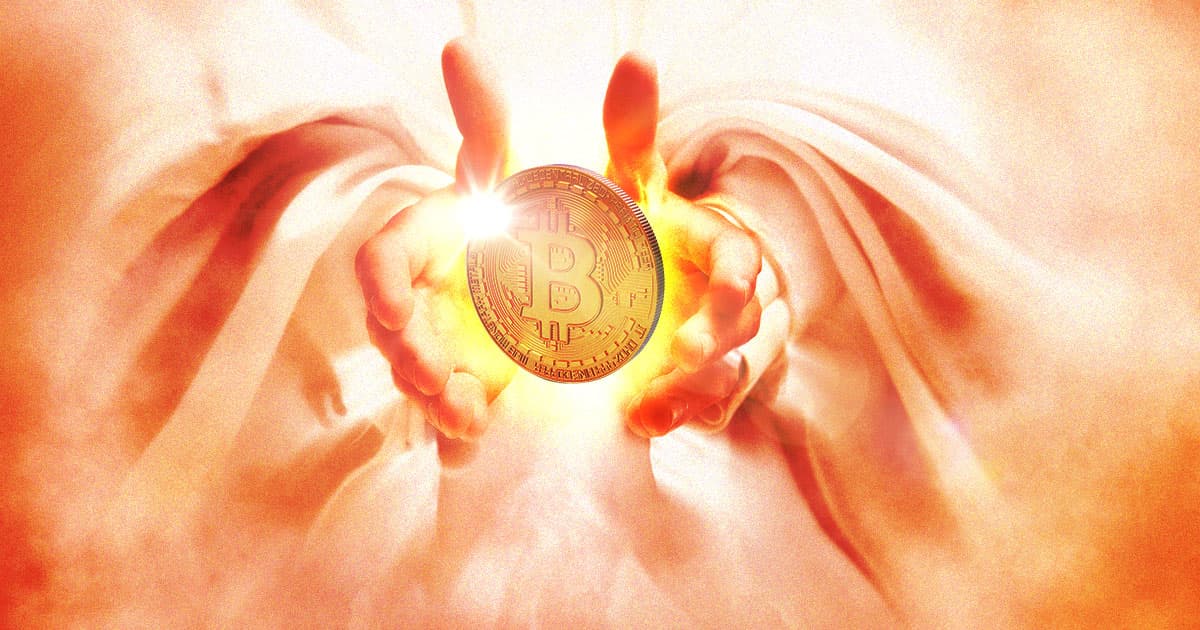 We are very sorry to inform you that the Bitcoin bros are so not okay, and that some of them have started believing that the cryptocurrency was sent down by the Christian God.

"This is the genius of God," Tomer Strolight, a former nonbeliever who got into Bitcoin and subsequently got baptized because of it, told Slate.

No, this isn't the the start of a 60 Minutes investigation. Instead, it's yet another look into the curious psyches of Bitcoin true believers, who in this case have married their love of crypto with the divine love of Jesus Christ.

Strolight decided to take the plunge while attending the first annual Thank God for Bitcoin conference, he told Slate, which as its name suggests is a con specifically for Christian Bitcoiners. There, he waded into the warm waters of Miami's South Beach and was born again as a Christian Bitcoin Bro.

The report notes that Bitcoin Christianity actually makes sense given how deeply crypto has crashed in recent months, meaning a religious framing seems almost necessary to continue to believe in 2022.

"Bitcoin adoption becomes a conviction," former ear, nose, and throat surgeon-turned-Christian author Patrick Melder — who baptized Strolight himself on South Beach — wrote in his self-published book "The Christian Case for Bitcoin," not to be confused with the essay anthology for which the conference is named, "Thank God for Bitcoin."

Indeed, Melder's declaration in his book that "in the not-too-distant future, those who adopted Bitcoin early, will be immensely wealthy" sounds a whole lot like your garden variety crypto bro, evangelicalism non-withstanding.

"Do you believe Bitcoin is the only coin, the true coin?" the author joked in his interview with Slate, miming a Bitcoin baptism. "I now raise you in the new life of Bitcoin."

May God help us all.

READ MORE: The People Who Are Finding God Through, and in, Bitcoin [Slate]

SBFX
Leaked Messages Show FTX Insiders Begging SBF to Step Down as Crisis Deepened
Yesterday
Read More
FTuxxed
Behind the Lawsuit Against Celebs Who Shilled FTX Before Its Spectacular Meltdown
Nov 19
Read More
Toes in the Water
Guy Linked to Huge Crypto Meltdown Says It’s Just a Coincidence That He’s Hanging Out in a Country With No Extradition to United States
Nov 18
Read More
+Social+Newsletter
TopicsAbout UsContact Us
Copyright ©, Camden Media Inc All Rights Reserved. See our User Agreement, Privacy Policy and Data Use Policy. The material on this site may not be reproduced, distributed, transmitted, cached or otherwise used, except with prior written permission of Futurism. Articles may contain affiliate links which enable us to share in the revenue of any purchases made.
Fonts by Typekit and Monotype.