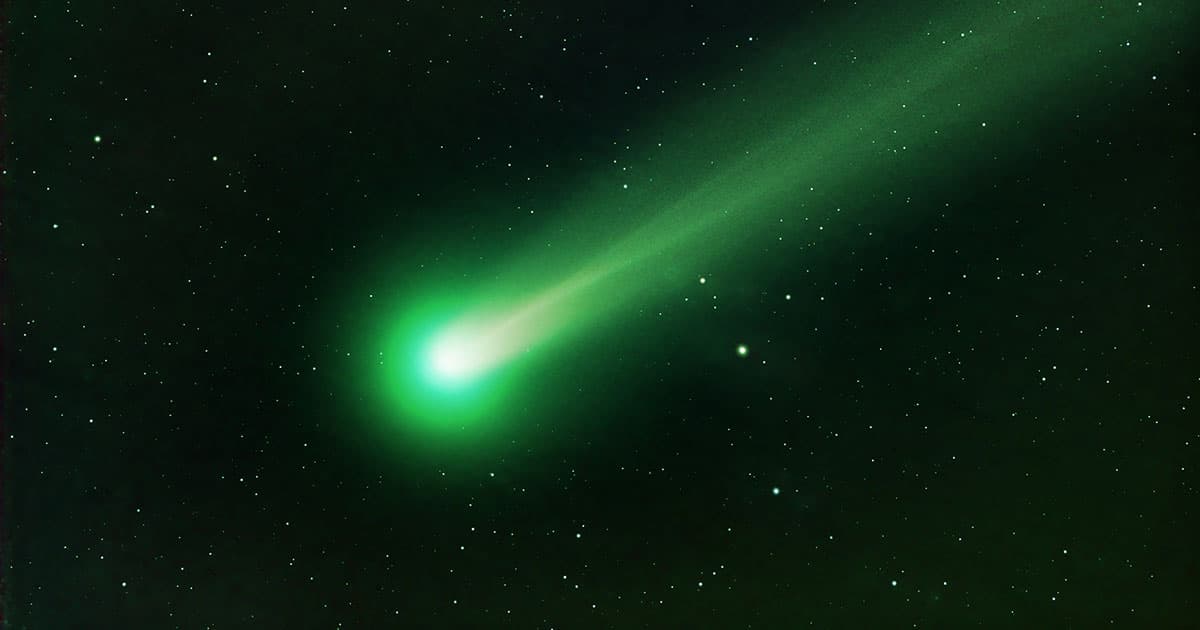 If you're lucky, you'll be able to see it with the naked eye.

If you're lucky, you'll be able to see it with the naked eye.

A newly-detected green comet is about to do a flyby near our Pale Blue Dot — and it may be visible to the naked eye.

When issuing its January 2023 skywatching predictions, NASA and CalTech's Jet Propulsion Laboratory declared that between January 12 and February 2, a green comet named C/2022 E3 (ZTF) will first approach the Sun and then circle back around towards Earth.

Space.com pinpoints the best viewing date even more precisely: during the new moon on January 21, when the sky will be extra-dark without the Moon's light.

"Comets are notoriously unpredictable," the JPL notes, "but if this one continues its current trend in brightness, it'll be easy to spot with binoculars, and it's just possible it could become visible to the unaided eye under dark skies."

Discovered in March 2022, this rare green comet was spotted using a wide-field survey camera at CalTech's Zwicky Transient Facility within Jupiter's orbit. Since then, it has hurdled ever closer to the Sun, and as NASA noted in a post about the comet, it will reach its perigee, or closest point to us on Earth, on February 1.

As Space.com notes, JPL data suggests that the last time this gorgeous green goblin came this close to Earth was about 50,000 years ago, meaning that the last humans to ever witness it were likely Ice Age-era Neanderthals.

Depending on light pollution and weather, it may be tough to see C/2022 E3 (ZTF) as it makes its way towards and away from Earth — but rest assured, skywatchers with expensive telephoto lenses or access to institutional telescopes will manage to get incredible shots of it.

RIP
Unfortunate Comet Flies Too Close to the Sun, Disintegrates and Becomes a Ghost
3. 24. 22
Read More
Delayed Pictures
Mars Helicopter Suffered Glitch During Flight, Forced Emergency Landing
5. 27. 21
Read More
Over the Rainbow
NASA: That's Not a Rainbow We Photographed on Mars
4. 6. 21
Read More
+Social+Newsletter
TopicsAbout UsContact Us
Copyright ©, Camden Media Inc All Rights Reserved. See our User Agreement, Privacy Policy and Data Use Policy. The material on this site may not be reproduced, distributed, transmitted, cached or otherwise used, except with prior written permission of Futurism. Articles may contain affiliate links which enable us to share in the revenue of any purchases made.
Fonts by Typekit and Monotype.