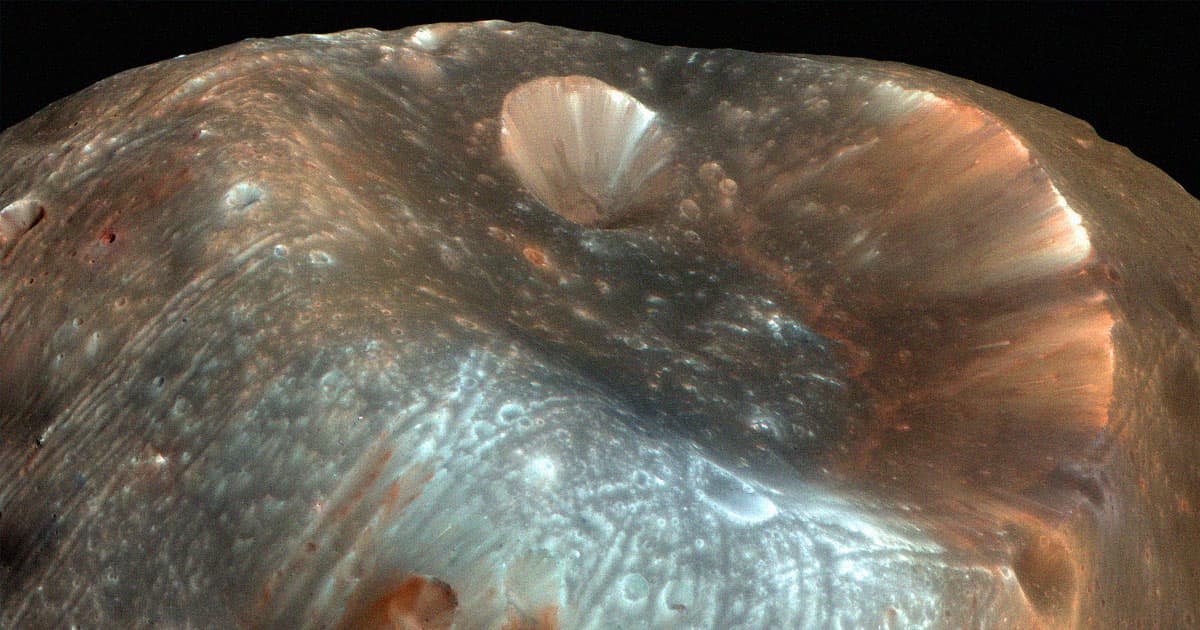 The European Space Agency's (ESA) Mars Express orbiter may be old — it launched back in 2003 — but it's still uncovering new clues.

Equipped with a new software upgrade to its Mars Advanced Radar for Subsurface and Ionosphere Sounding (MARSIS) instrument, the veteran spacecraft has now taken a deeper look into Phobos, one of Mars' moons whose origins remain an enigma to astronomers.

"We are still at an early stage in our analysis," said Andrea Cicchetti, a MARSIS team member from Italy's National Institute for Astrophysics, in a press release. "But we have already seen possible signs of previously unknown features below the moon's surface. We are excited to see the role that MARSIS might play in finally solving the mystery surrounding Phobos' origin."

Phobos, along with Deimos, are Mars' two diminutive moons, ominously named after the Greek gods of fear and panic.

Neither, it's worth noting, is particularly moon-like. They're both small, with Phobos being less than 17 miles in diameter, and look more like lumpy asteroids than a spherical moon like Earth's.

These strange but fascinating characteristics, along with their suspected asteroid-like compositions, have long split astronomers on their origins.

"Whether Mars' two small moons are captured asteroids or made of material ripped from Mars during a collision is an open question," said Mars Express scientist Colin Wilson in the release. "Their appearance suggests they were asteroids, but the way they orbit Mars arguably suggests otherwise."

That's where MARSIS comes in. With an antenna over 130 feet long, MARSIS is capable of shooting low frequency radio waves that can penetrate deep into Phobos' core. While many of the waves don't make it past the surface, the ones that do make it bounce between the internal structures and boundaries of differing materials in the mini-moon's interior.

Examining these reflections, captured in a "radargram," could paint scientists a better picture of Phobos' sub-surface structures, as well as its overall composition. Bright lines in the radargram indicate more or less innocuous surface reflections, but the scientists say there's evidence of fainter, "lower reflections" that could be signs of subterranean structures.

To get to the bottom of this mystery, the ESA will be collaborating with the Japanese Space Agency to collect samples from Phobos' surface in the Martian Moon Exploration (MMX) mission, currently set to launch in 2024.

More on Mars: Scientists Searching Mars for Good Caves for Astronauts to Live In