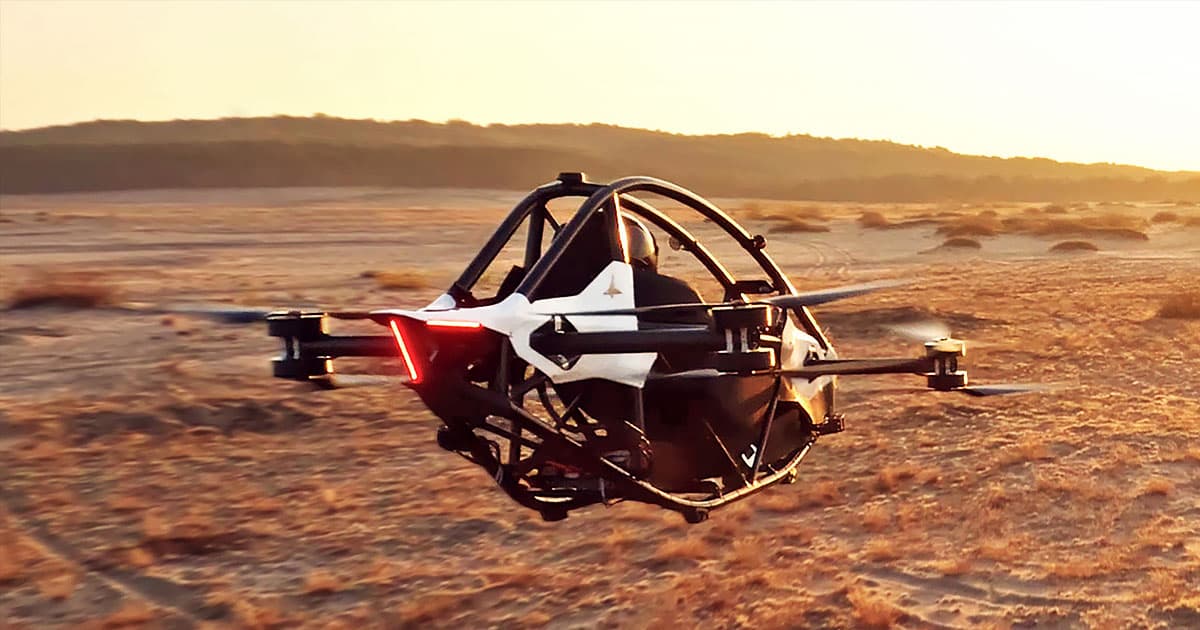 "This is a machine made for mischief, basically."

"This is a machine made for mischief, basically."

A stunning promotional video shows the small vehicle in action, flying over a deserted landscape. The cockpit is stripped down, using a smartphone to display flight information.

In other words, a future where we can strap into a flying motorcycle is upon us — and we're here for it.

"This thing makes that dream possible," Jetson co-founder Peter Ternstrom told the BBC of the Jetson ONE. "It's just awesome. I love it."

The Jetson ONE small for a very important reason: the Federal Aviation Administration (FAA)'s definition of an ultra-light vehicle — which doesn't require a pilot's license — must weigh less than 254 pounds and have a maximum speed of 63 mph.

The company says it's already taken preorders for 118 hover bikes and is hoping to ship the first one some time next year.

"If you have previous experience, we have said, 'OK, cool, you can buy one,'" Ternstrom told the BBC.

Each customer who shells out $92,000 for a hover bike will get to attend a two-day bootcamp in Tuscany, Italy.

The battery allows for 20 minutes of flight time, but the company is hoping to up that figure as battery technologies progress. According to the company's website, it can fly up to 63 mph — but only because of "software limits" put in place — and reach heights of 1,500 feet above ground.

But is it safe? The Jetson ONE uses a LIDAR system to detect the distance to the ground and will slow down automatically once it's close. The company also says it can fly using only three propellers if one fails — but not for very long.

"This is a machine made for mischief, basically," Ternstrom told the BBC. "I want them to be very responsible."

READ MORE: Like a drone that you sit in – but would you feel safe? [BBC]