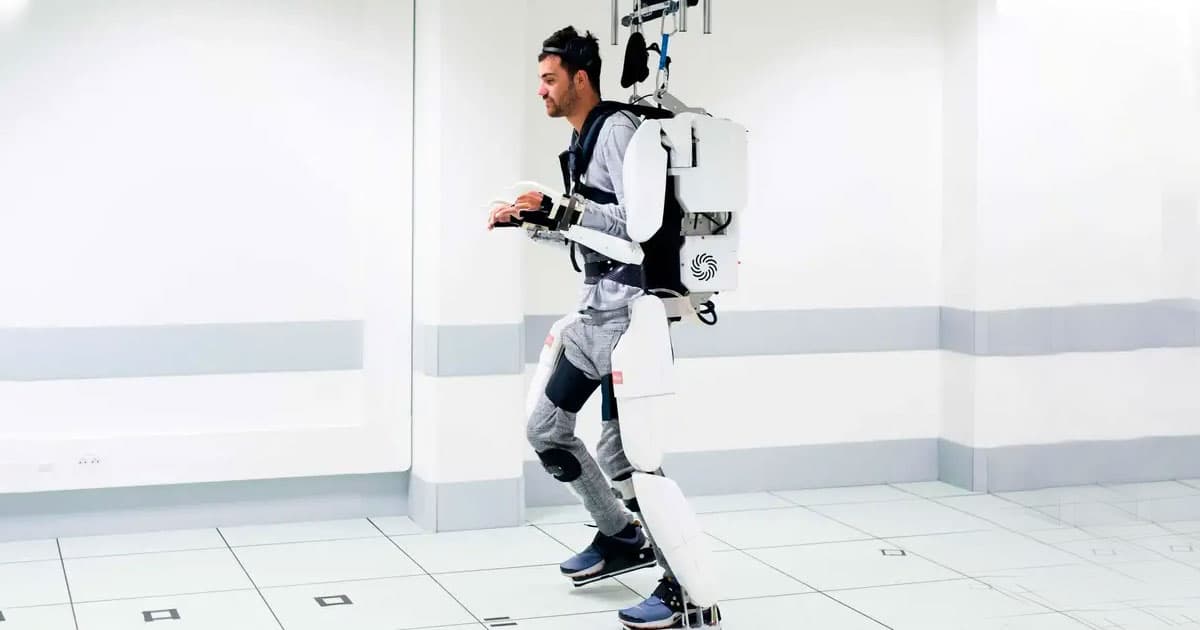 "It was like [being the] first man on the Moon."

"It was like [being the] first man on the Moon."

A French man was able to regain control over all four of his paralyzed limbs thanks to a mind-controlled exoskeleton suit, the BBC reports.

A video shows 30-year-old Thibault (last name redacted) wearing the bulky 143-pound exoskeleton, which hangs from a support rail attached to the ceiling. In the clip, he walks across the room and moves both of his arms in all directions.

"It was like [being the] first man on the Moon," Thibault told the BBC. "I didn't walk for two years. I forgot what it is to stand, I forgot I was taller than a lot of people in the room."

The suit is the result of a partnership between French biomedical research center Clinatec and the University of Grenoble, France.

Thibault controls the device using two brain implants that monitor the part of the brain responsible for movement. The implants pick up the brain signals and send instructions to a nearby computer, which then translates the signals into movement. This video from The Lancet shows how it works:

While impressive, the tech still has a long way to go. At this stage, it's more of a proof-of-concept than a practical solution to paralysis.

The team is hoping to get a more detailed map of the brain implants' readings and a more powerful computer to improve the responsiveness of the suit — but they're already encouraged by their results.

"This is in [the] direction of giving better quality of life," Benabid told the BBC.

More on exoskeletons: The US Military is Buying a Brutal-Looking Powered Exoskeleton

Guardian Exoskeleton
The U.S. Military is Buying a Brutal-Looking Powered Exoskeleton
3. 19. 19
Read More
Cyber Cafe
People With Paralysis Control the Robot Waiters at This Cafe
12. 6. 18
Read More
Customized "Exosuits" Will Move With Your Stride
2. 28. 18
Read More
+Social+Newsletter
TopicsAbout UsContact Us
Copyright ©, Camden Media Inc All Rights Reserved. See our User Agreement, Privacy Policy and Data Use Policy. The material on this site may not be reproduced, distributed, transmitted, cached or otherwise used, except with prior written permission of Futurism. Articles may contain affiliate links which enable us to share in the revenue of any purchases made.
Fonts by Typekit and Monotype.