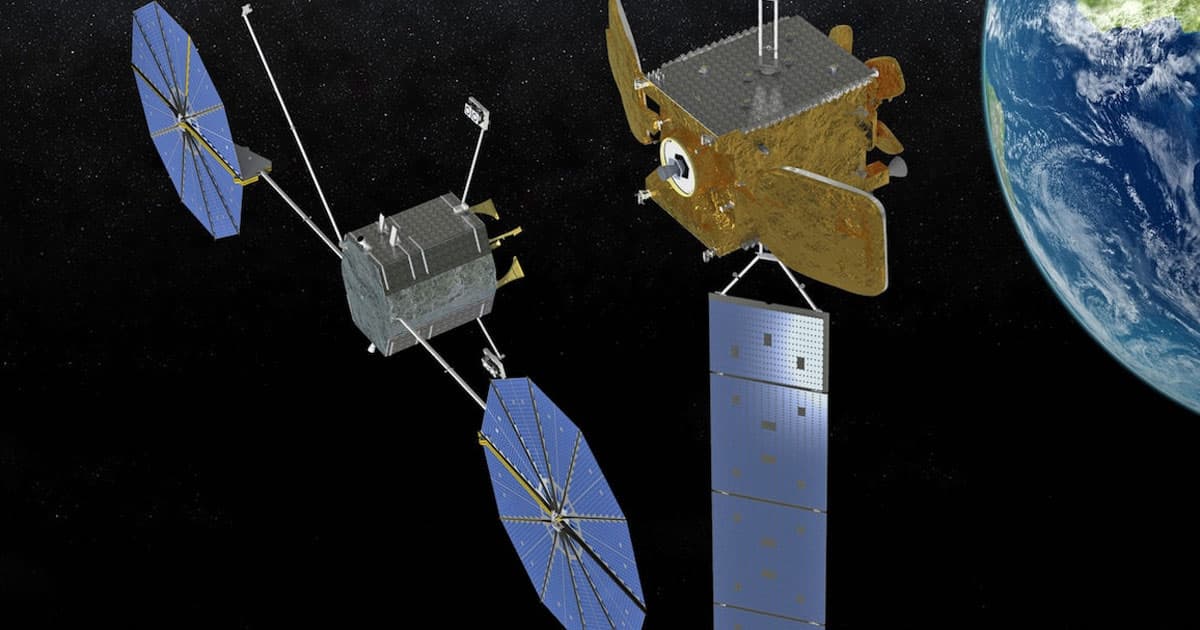 These orbital robots are designed to give ancient satellites a new lease on life.

These orbital robots are designed to give ancient satellites a new lease on life.

And on Saturday, the company successfully launched the satellite's successor, MEV-2, atop an Ariane 5 rocket from the Guiana Space Center.

Both spacecraft are designed give ancient satellites a new lease on life by replacing their engines and refueling them, a process dubbed "satellite servicing."

In April, MEV-1 successfully nudged its target satellite Intelsat 901, from a "graveyard orbit" thousands of kilometers above Earth, back into a geosynchronous orbit, officially allowing it to function again.

The graveyard orbit is where satellites go when they're retired. Geosynchronous orbit is far closer, relatively speaking, and allows satellites orbit while staying steady with the surface of the Earth.

MEV-2 will do something very similar. "MEV-2 is essentially a carbon copy of MEV-1 from a design standpoint," Joe Anderson, vice president of operations and business development at Space Logistics, a Northrop Grumman subsidiary, told The Verge.

Apart from the design however, MEV-2 will be able to take things to the next level. It will attempt to dock to an actively functioning satellite called Intelsat 10-02 while in geosynchronous orbit — not a graveyard orbit.

It will then essentially take over the task of maintaining orbit, rather than moving its target satellite into a different orbit.

The company claims the disruption in communications caused will be less than 20 minutes.

Northrop Grumman is now focusing on its "Mission Robotic Vehicle" (MRV), a spacecraft that can carry out a variety different satellite repairs.

More on the spacecraft: World’s First: Spacecraft Docks to Commercial Satellite In Orbit

Northrop Grumman's Jet of the Future
12. 16. 15
Read More
CHON: Legacy
James Webb Discovers Coldest Ice in Known Universe, Harboring Molecules Essential For Life
Yesterday
Read More
Not a Scientist, Just Three Chatbots in a Trench Coat
Largest Publisher of Scientific Journals Slaps Down on Scientists Listing ChatGPT as Coauthor
Yesterday
Read More
+Social+Newsletter
TopicsAbout UsContact Us
Copyright ©, Camden Media Inc All Rights Reserved. See our User Agreement, Privacy Policy and Data Use Policy. The material on this site may not be reproduced, distributed, transmitted, cached or otherwise used, except with prior written permission of Futurism. Articles may contain affiliate links which enable us to share in the revenue of any purchases made.
Fonts by Typekit and Monotype.