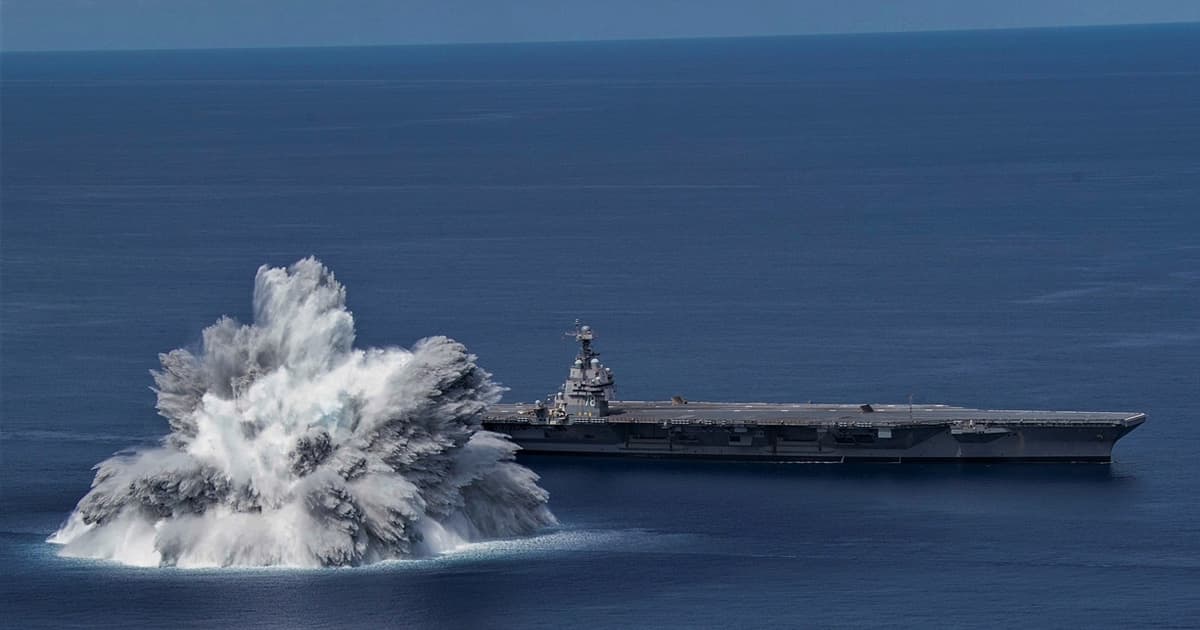 US Navy Sets Off Giant Explosion That Registers as 3.9 Magnitude Earthquake

Here's what detonating 40,000 pounds worth of explosives in the ocean looks like.

Here's what detonating 40,000 pounds worth of explosives in the ocean looks like.

The US Navy detonated 40,000 pounds worth of explosives right next to a a warship to make sure it can withstand battle conditions — and the aerial footage picked up by a nearby helicopter is unreal.

The explosion was so massive, in fact, that it registered as a 3.9 magnitude earthquake about 100 miles away on the coast of Florida, as ABC Australia reports.

The intentional explosion was part of a June 18 "Full Ship Shock Trial" in the Atlantic ocean.

Twenty metric tons of explosives were set off within spitting distance of the USS Gerald R Ford, one of the longest aircraft carriers in the world — a shocking display of military might that offers at tiny glimpse of what an all-out war might look like in 2021.

The carrier is over 250 feet high and over 1,000 feet long, just shy of three football fields back to back.

It was scheduled for three explosions, but may only end up experiencing only two, according to USNI News.

"The US navy conducts shock trials of new ship designs using live explosives to confirm that our warships can continue to meet demanding mission requirements under harsh conditions they might encounter in battle," the Navy said in a statement, as quoted by ABC.

"The first-in-class aircraft carrier was designed using advanced computer modelling methods, testing, and analysis to ensure the ship is hardened to withstand battle conditions, and these shock trials provide data used in validating the shock hardness of the ship," the Navy continued.

Officials maintain that the massive shockwave complied with "environmental mitigation requirements" and respected "known migration patterns of marine life in the test area," according to the statement.

After undergoing the trials, the ship will return to a dry dock to undergo modernization, maintenance, and repairs, according to the BBC — a well-deserved recovery.

US Navy's "Augmented Guidance" Tech Brings Automation to Aircraft Landings
8. 5. 16
Read More
The U.S. Navy Put A Fallout-Like HUD in Their Newest Helmet
6. 8. 16
Read More
Gone Guy
Man Who Accidentally Got Paid 330x His Salary Quits, Disappears
Jul 3
Read More
+Social+Newsletter
TopicsAbout UsContact Us
Copyright ©, Camden Media Inc All Rights Reserved. See our User Agreement, Privacy Policy and Data Use Policy. The material on this site may not be reproduced, distributed, transmitted, cached or otherwise used, except with prior written permission of Futurism. Fonts by Typekit and Monotype.