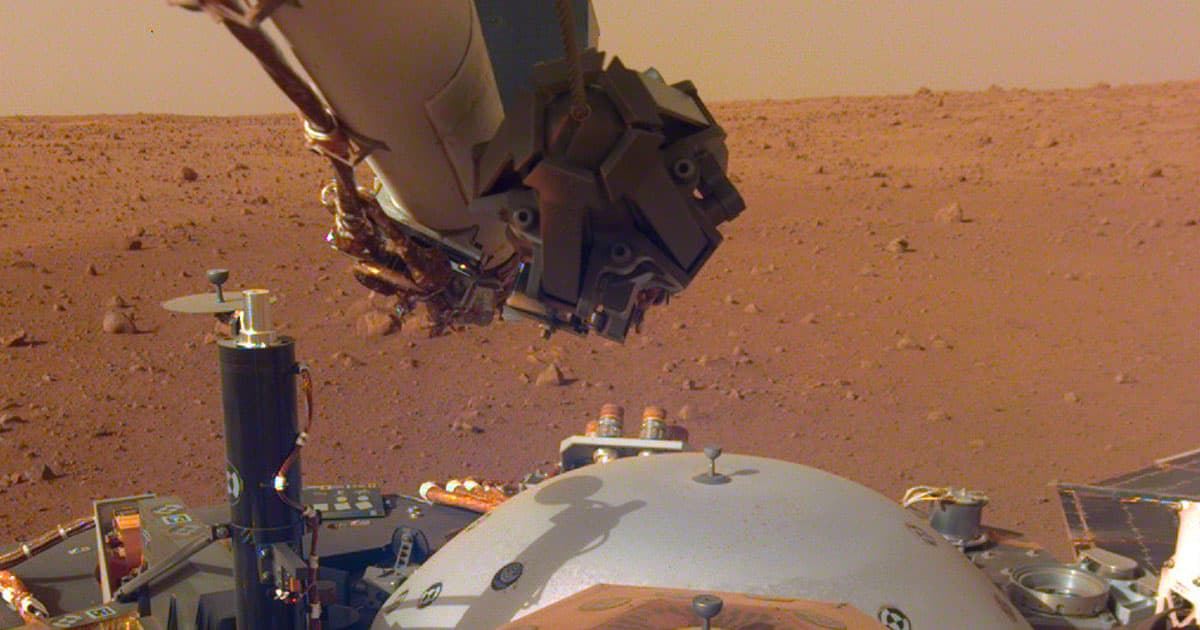 And it's ready to get to work.

And it's ready to get to work.

If you visit Mars and don't take a selfie, did the interplanetary trip even count?

NASA's InSight lander just flexed its 6 foot (2 meter) telescopic arm, and used it to take some more pictures of its dusty Martian surroundings.

The plan is to use the arm to very gently pick up scientific instruments from the lander's deck and place them next to it on the Martian soil. A special camera attached to InSight's elbow is looking for a suitable spot for each of its scientific instruments. If it succeeds, it'll be the first time any rover has placed an object on the surface of another planet using a robotic arm, NASA pointed out in an update.

But that process is going to take a while: the team at the Jet Propulsion Lab will deploy InSight's instruments over a period of two to three months.

So far, the engineers have just been running the instruments through tests to find out if they're working properly.

"We did extensive testing on Earth. But we know that everything is a little different for the lander on Mars, so faults are not unusual," says project lead Tom Hoffman of JPL, as quoted in NASA's update. "They can delay operations, but we're not in a rush. We want to be sure that each operation that we perform on Mars is safe, so we set our safety monitors to be fairly sensitive initially."

Seeing pictures taken on the Martian surface will never get old. By next week, we'll get an even more detailed view, so stay tuned.

Death Watch
Goodnight Sweet Prince: NASA is Officially Killing Its Mars Lander
5. 17. 22
Read More
Delayed Pictures
Mars Helicopter Suffered Glitch During Flight, Forced Emergency Landing
5. 27. 21
Read More
Over the Rainbow
NASA: That's Not a Rainbow We Photographed on Mars
4. 6. 21
Read More
+Social+Newsletter
TopicsAbout UsContact Us
Copyright ©, Camden Media Inc All Rights Reserved. See our User Agreement, Privacy Policy and Data Use Policy. The material on this site may not be reproduced, distributed, transmitted, cached or otherwise used, except with prior written permission of Futurism. Articles may contain affiliate links which enable us to share in the revenue of any purchases made.
Fonts by Typekit and Monotype.