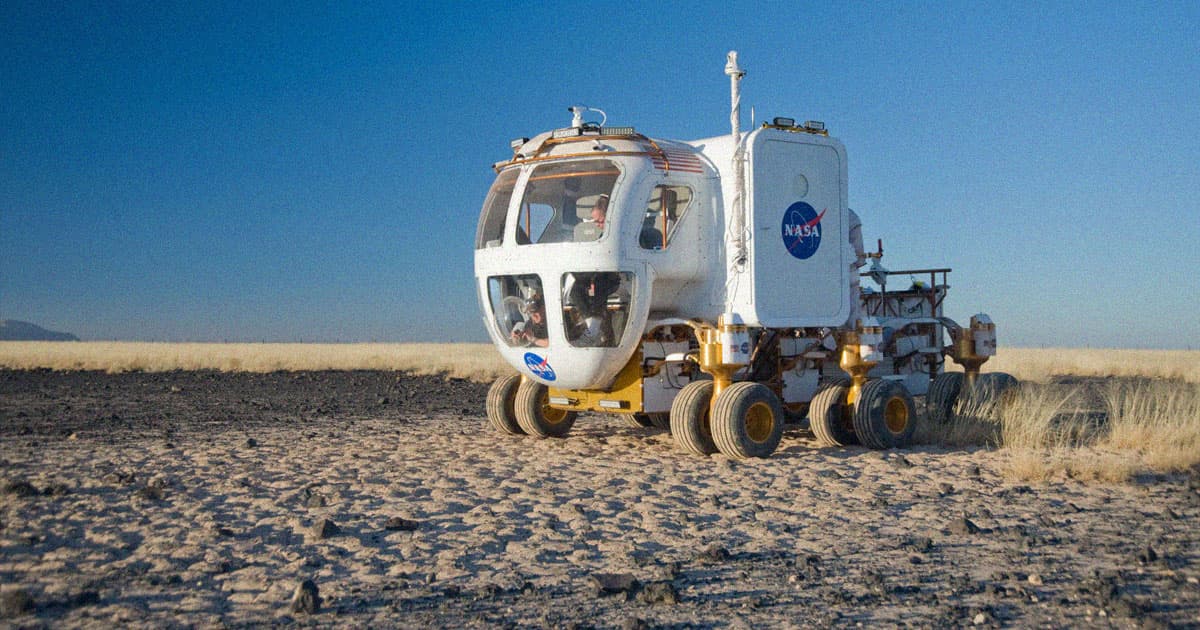 It can spin, it can climb, it can turn on a dime.

It can spin, it can climb, it can turn on a dime.

If astronauts are exploring the Moon again, they're going to need a way to get around.

And so, out on the dusty desert riddled by an ancient lava flow just north of Flagstaff, Arizona, NASA has been putting its new lunar rover to the test. All hands are on deck, too, with astronauts, engineers, and scientists collaborating to make sure that their pressurized rover can tackle the moon's battered terrain jutting with crags and peppered with craters.

To navigate those obstacles, the lunar rover can spin, drive sideways, and even clamber up rocks up to a foot tall, according to NBC 12, thanks in large part to its robust wheels. Best of all, it's got a cozy pressurized cabin — leading the agency to compare it to a recreational vehicle (RV).

"People spent two nights in the rover and three days traversing all over the lava flow doing actual geologic science conversing with Mission Control in Houston and really simulating a real lunar mission," Omar Bekdash, a NASA engineer involved in the project, told the broadcaster.

Despite the rover's advanced engineering, it's actually fairly easy to drive, using a joystick for basic maneuvering.

"All the wheels are independently controlled and they also have active suspension so they can raise and lower when needed," Bekdash explained.

That was a deliberate consideration by its designers since the astronauts using it will be expected to drive around in the rover for up to days at a time. So they threw a toilet in, too, for good measure, making it even more like an RV.

The commitment to simulating a lunar mission is what makes the patch of Arizona desert an ideal staging ground with its rocky topography, rough terrain, and relative lack of contact with the outside world.

The NASA crew even have to camp out there, which is the perfect analogue to the distinguishing factor of NASA's Artemis program, which will see an American set foot on the Moon for the first time since 1972: this time, the astronauts will have to live on lunar surface.

Some of the living will happen in a planned Moon base, and sometimes the astronauts will have to live out of the rovers themselves.

But a human landing on the Moon won't happen until at least the third mission of the ambitious program, Artemis III, currently set to launch in the mid-2020s.