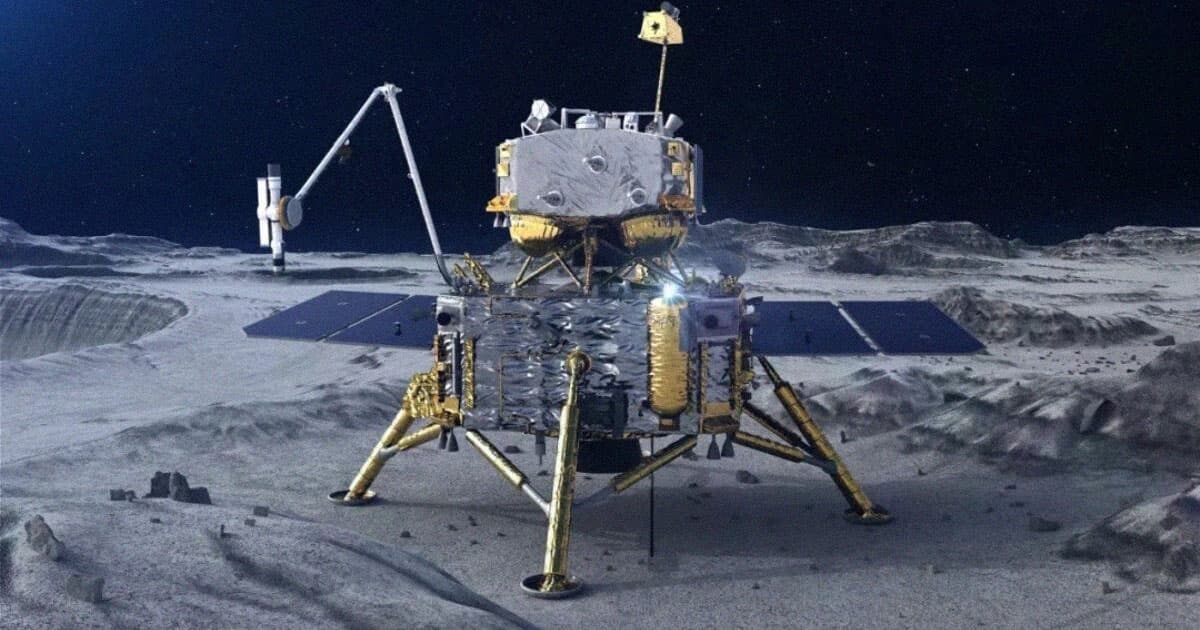 The space race just got a little bit hotter.

The space race just got a little bit hotter.

The space race may just have heated up amid China's reported discovery of a new lunar mineral that could possibly be used as an energy source.

First announced in a press conference covered by Chinese state news site Xinhua, the finding appears to be, as Interesting Engineering notes, the first time China has claimed the discovery of a new mineral on the Moon.

Adding to the sense of momentum, the country also announced that its space agency had approved three more uncrewed Moon missions over the next ten years..

International Mineralogical Association has approved the name of a new mineral (Changesite 嫦娥石) discovered in the Chang'e-5 lunar soil one day before the Mid-Autumn Festival #CNSA pic.twitter.com/oprBGkwhBC

Found using the Chang'e-5 lunar probe for which it was named, Changesite-(Y) is a phosphate mineral found among lunar basalt samples. It's characterized by its c0lumnar shape, colorlessness, and semi-transparent opacity. Though its exact properties remain a bit hazy, Bloomberg notes that the mineral is said to contain helium-3, an isotype that some believe could be an energy source in the future.

Though the claim of a new lunar mineral is a first for China, it's not a first for the spacefaring community at large. Previously, the United States and Russia have also discovered new minerals from lunar samples, making China's reported finding yet another update in the three-way space race.

As countries and private entities prepare to launch countless new crewed and uncrewed lunar missions over the next decade, the question of Moon mining will become all the more salient. As of now, no country lays claim to the Moon, per the nearly 60-year-old Outer Space Treaty, but space policy experts have for years been calling for an update to the accords, which were drafted and put into effect in 1967 in part because of this very issue.

We know next-to-nothing about Changesite-(Y) so far, but if it is indeed a potential next-generation energy source, it could change the game even further — and could bust the question of lunar mining rights wide open.

READ MORE: China claims discovery of a new mineral on the moon for the first time [Interesting Engineering]

More Moon: Awkward! The US and China Are Looking at the Same Moon Landing Sites

And He Scores
We Are Completely Puzzled by This Video of a Chinese Astronaut Playing Ping-Pong in Space
Jan 6
Read More
Moon Wrestling
The Head of NASA Is Scared Chinese Astronauts Will Seize Portions of the Moon
Jan 3
Read More
Putting Things In Perspective
Amazing Artemis Photo Shows Every Human, Alive or Dead, Plus the Moon
11. 29. 22
Read More
+Social+Newsletter
TopicsAbout UsContact Us
Copyright ©, Camden Media Inc All Rights Reserved. See our User Agreement, Privacy Policy and Data Use Policy. The material on this site may not be reproduced, distributed, transmitted, cached or otherwise used, except with prior written permission of Futurism. Articles may contain affiliate links which enable us to share in the revenue of any purchases made.
Fonts by Typekit and Monotype.