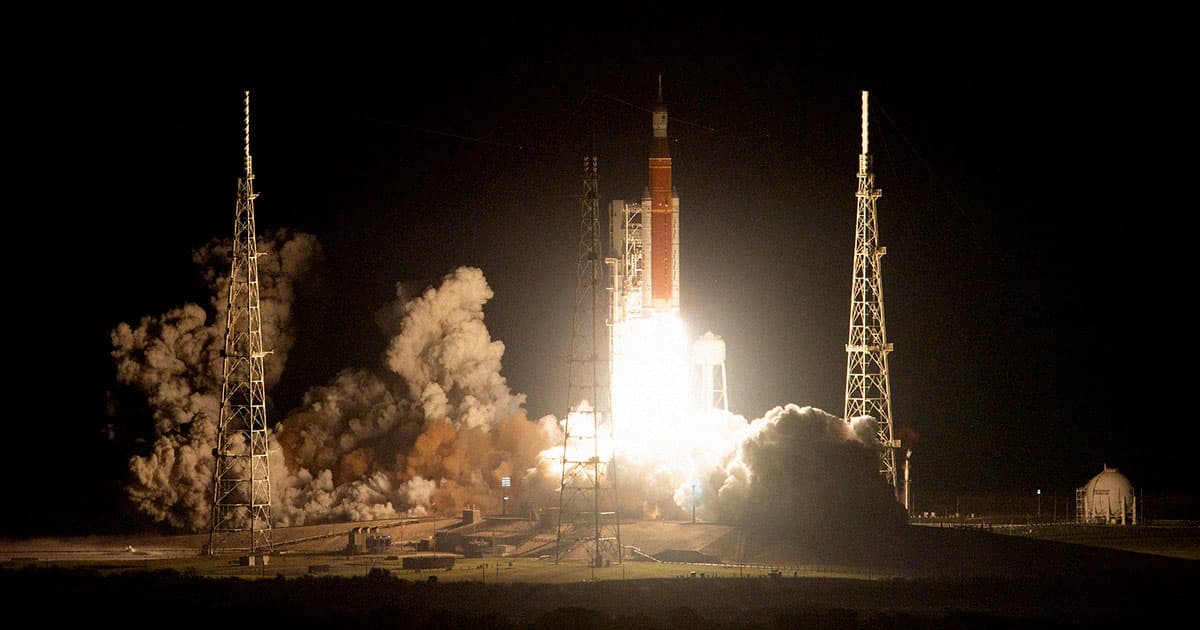 Giant NASA Rocket Blasts Off Toward the Moon

NASA successfully launched its gigantic Space Launch System (SLS) Moon rocket early Wednesday morning, a watershed moment in the history of humanity's efforts to return to the Moon for the first time in half a century.

The rocket lifted off just after 1:45am Eastern time from Launch Complex 39 B at NASA's Kennedy Space Center in Florida. The rocket's massive boosters roared into action, generating a whopping 8.8 million pounds of thrust, an awe-inspiring sight.

"Congratulations to NASA and our private sector and international partners on the launch of Artemis I," wrote US vice president Kamala Harris. "Today, America is charting a path back to the Moon. This is a landmark moment for our nation and our world."

For the first time, the @NASA_SLS rocket and @NASA_Orion fly together. #Artemis I begins a new chapter in human lunar exploration. pic.twitter.com/vmC64Qgft9

The rocket carried NASA's uncrewed Orion capsule into orbit, where it has since successfully completed its first burn on its long journey to the Moon's orbit.

The plan is for the spacecraft to travel around the Moon, before using the Moon's gravitational pull to slingshot itself back to Earth. The mission is expected to take approximately 25 days, meaning it will attempt a splashdown in the Pacific Ocean around December 11.

Wednesday's launch follows many years of budget overruns, delays, and a host of technical issues that forced NASA to abort two attempts earlier this year.

Most recently, Hurricane Nicole whipped by the launch pad, stripping a ten-foot piece of caulk off the rocket.

Fortunately, neither technical issues nor bad weather were an issue during today's launch.

The next step for NASA is Artemis II, its first crewed mission to the Moon — albeit not the surface — since 1972. Launch is tentatively scheduled for 2024.

More on the launch: NASA Says Hurricane Nicole Peeled Off Part of Its Huge Moon Rocket