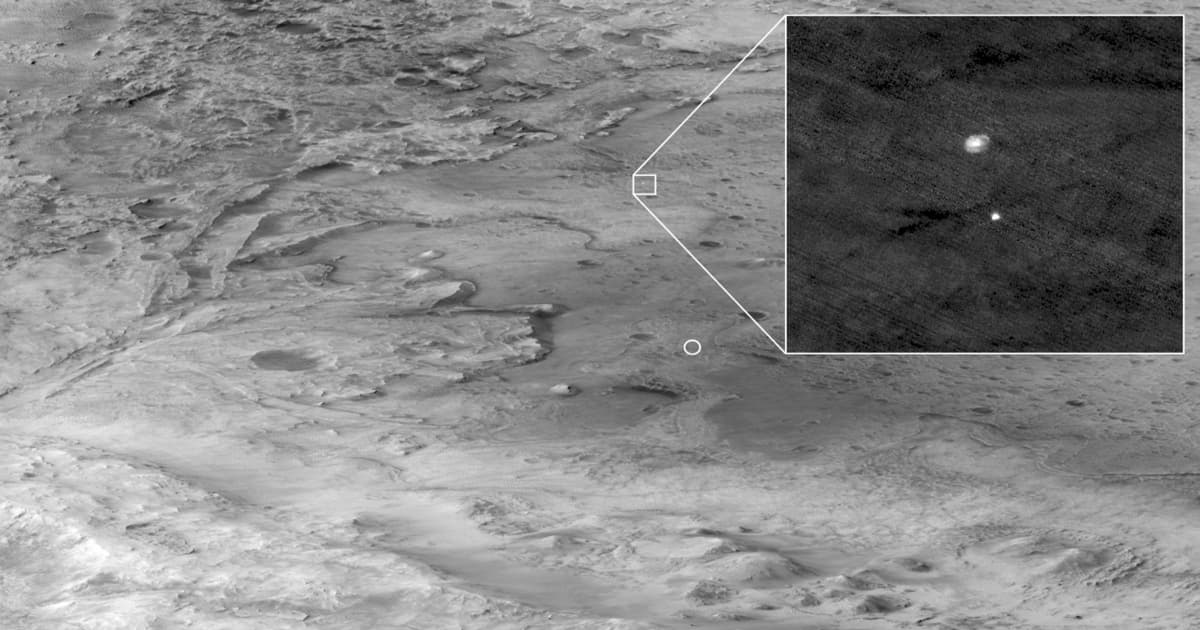 A zoomed out photo shows NASA's newest rover touching down on Mars.

A zoomed out photo shows NASA's newest rover touching down on Mars.

NASA continues to give Annie Leibovitz a run for her money with its stunning new photos of the Perseverance rover as it landed on Mars on Thursday.

One of its latest is a spectacular wide shot of Perseverance as it descends on parachute through the Martian atmosphere — another historic document of what may be the most technologically advanced off-planet exploration in the history of humankind.

Every picture tells a story. This one captures me in midair, floating over Mars while hanging from my parachute during the final #CountdownToMars.

The photo comes courtesy of NASA’s Mars Reconnaissance Orbiter — a satellite tasked with analyzing the Martian climate and geology. The spacecraft used a powerful camera called the High Resolution Camera Experiment (HiRISE) to snap the photo. HiRISE previously gave the Curiosity rover the same treatment when it arrived the Red Planet in 2012.

Perseverance itself is also armed with a host of cameras to capture images for analysis. The rover has the unique distinction of being the first rover to capture the majority of its images in color, NASA says —  such as this one of the Jezero Crater where it touched down:

While the Perseverance mission is putting the MET Gala to shame with its photo ops, the rover is already hard at work on Mars preparing for its long stay.

On Friday, NASA set off pyrotechnic charges to release the rover’s "head," which contains navigational cameras used for driving along with vital sensors, according to the agency. The rover is also charging power to Ingenuity, the helicopter NASA’s Jet Propulsion Lab will use to take flight on the Martian surface for the first time.

So luckily, we all have many years of Mars-related memes to look forward to.

Wait... what's that in NASA's first image from the Mars rover pic.twitter.com/ivdvdslGwy