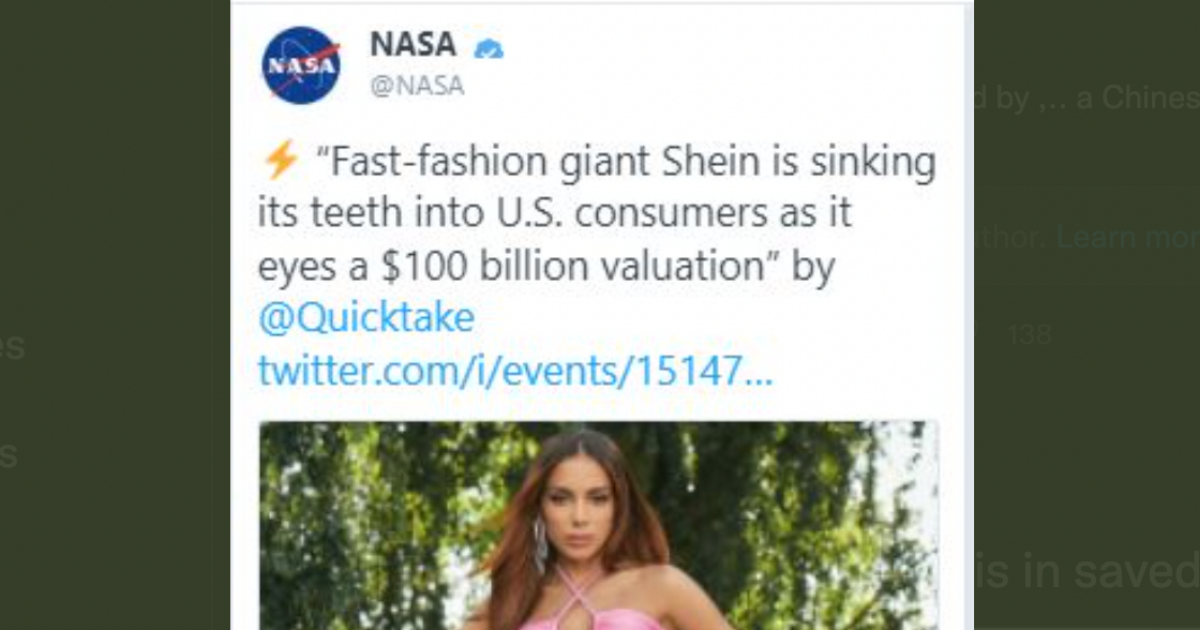 Wait, what's going on over there?

Wait, what's going on over there?

Whoops! Unless NASA was trying to show off an unusual new astronaut uniform, it was probably an accident that the US space agency sent out a tweet today featuring a model in a pink two-piece bikini, alongside a Bloomberg story about retail giant Shein.

After the eyebrow-raising post, Ars Technica senior editor Eric Berger speculated that NASA had been hacked. After they deleted their post, the sharp-eyed Berger posted a screenshot for posterity.

"Fast-fashion giant Shein is sinking its teeth into US consumers as it eyes a $100 billion valuation," NASA's since-deleted tweet read just above the bikini pic, pictured below.

Tweet is now deleted, but here it is in saved form ... pic.twitter.com/OCZrodw3A6

As of now it's impossible to tell what actually happened, in part because NASA hasn't tweeted anything about the deleted post since it happened.

Although hacking is always possible, the link to a real Bloomberg article about Shein published five days ago doesn't really lend a lot of evidence to that theory. After all, the post doesn't seem to involve a phishing or money-grabbing scam of any kind, which is surely what hackers would presumably want.

A likely alternate possibility is that a social media manager at the agency made a simple mistake.

"They forgot to switch accounts," one user suggested in reply to Berger's tweet.

It's extremely common for social media managers to handle multiple accounts or clients at once, and most of the time it requires switching back and forth between accounts to post to the appropriate one. Maybe a communications workers was simply trying to promote a news story for a client or their own personal account. There's a long history of similar goofs, like when Heinz accidentally posted something a lot spicier than ketchup on its feed in 2015. And let's not even get into Texas senator Ted Cruz' 2017 gaffe.

Since the event doesn't seem to have caused harm so far, let's hope nobody loses their job. It was weird and funny, and just about everybody could use a few extra laughs these days.