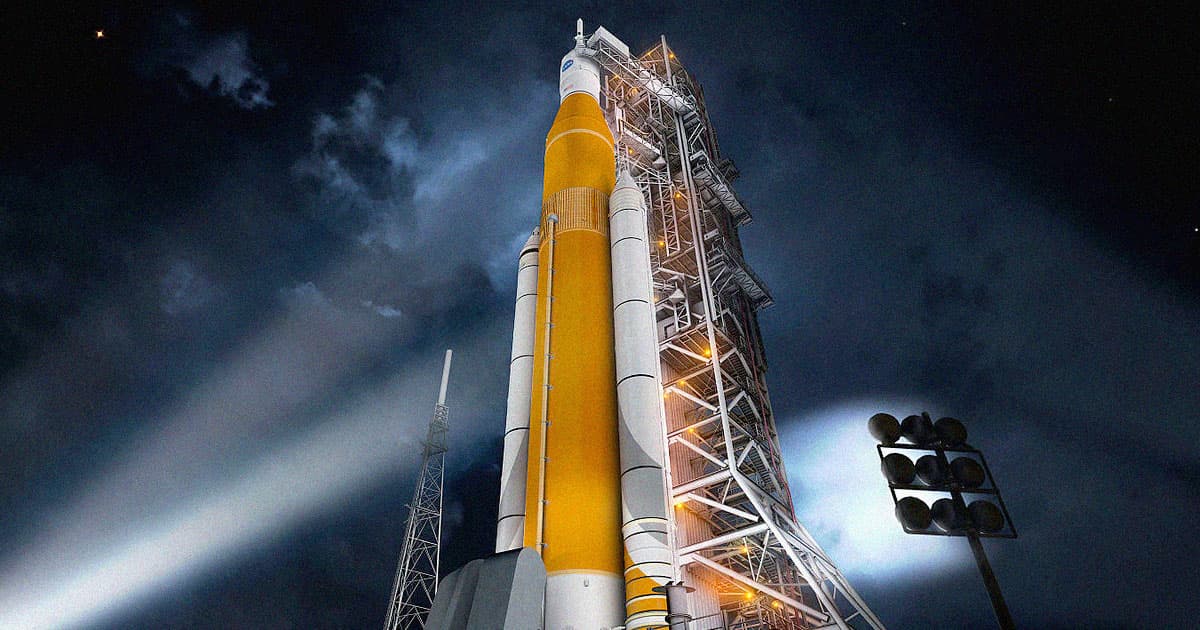 Could a private contractor really build the SLS for less than half the cost?

Could a private contractor really build the SLS for less than half the cost?

After spending tens of billions of dollars developing its super-heavy and Moon-bound Space Launch System (SLS), NASA is turning to the private industry to keep the doomed system alive — and for the next 30 years or so.

In a request spotted by Ars Technica, NASA is suggesting a single contractor could take over production, ownership of flight hardware, and operations while also arranging the leasing of the system to other contractors.

NASA proposes that it could remain an "anchor tenant" of the SLS, flying a crew into space once a year using the rocket. So in other words, NASA is committing to using the troubled launch system long term once it's in the hands of a contractor.

NASA is also suggesting the contractor could produce the rocket at half the price or less compared to the current "baseline per flight cost," Ars reports — which, although it's a laudable goal, raises the unavoidable question of why NASA didn't build a cheaper and more practical rocket in the first place.

Why any private entity would take over production and leasing of the system is somewhat unclear — it's not exactly a hot deal. The rocket has cost over 30 billion dollars and over a decade to develop.

It's also an exceedingly expensive way to get astronauts to the Moon. According to 2019 budget estimates, each launch could cost over $2 billion. But we have yet to get a straight answer from NASA as to how much each launch could cost — let alone if a contractor will actually be able to bring down costs per launch.

Unlike SpaceX's heavy launch system Starship, the SLS is also fully expendable, meaning that none of the components will ever be reused.

As Ars points out, it wouldn't be the first time NASA tried to offload a launch system. In the 1990s, the agency consolidated Space Shuttle operations under the United Space Alliance, a single contractor.

Is NASA looking for a Hail Mary to ensure a future of its extremely over budget and behind schedule rocket? To many, the industry has already moved on from expensive and expendable rockets.

But given the agency's existing relations and yearly budget from the government, it's likely a contractor will come forward sooner rather than later.

READ MORE: NASA wants to buy SLS rockets at half price, fly them into the 2050s [Ars Technica]

More on the SLS: The SLS Is Probably the Last Rocket NASA Will Ever Build

Makeover Scene
Space Tourist Says He's Thinking About Flying SpaceX Craft Up to Fix Hubble
Sep 29
Read More
Grain of Salt
There's a Huge Problem With Elon Musk's Promise to Bring Starlink to Iran
Sep 27
Read More
Palliative Care
NASA's Mars Lander Refuses to Die Even Though It's Supposed To
Sep 24
Read More
+Social+Newsletter
TopicsAbout UsContact Us
Copyright ©, Camden Media Inc All Rights Reserved. See our User Agreement, Privacy Policy and Data Use Policy. The material on this site may not be reproduced, distributed, transmitted, cached or otherwise used, except with prior written permission of Futurism. Articles may contain affiliate links which enable us to share in the revenue of any purchases made.
Fonts by Typekit and Monotype.